Smartphone brands are known to limit the performance of a select number of apps on their handsets in order to save some battery life. There have been cases of OnePlus throttling apps on its flagships. Now, Samsung has admitted to throttling apps as well. Twitter user GaryeonHan and Korean netizens have reported that around 10,000 apps are apparently being subjected to “performance limits” (throttling) as part of Samsung’s Game Optimizing Service (GOS) on its Galaxy phones. There have been multiple user complaints on the Samsung Korea community. In response, the brand acknowledged the throttling and is investigating the GOS issue. 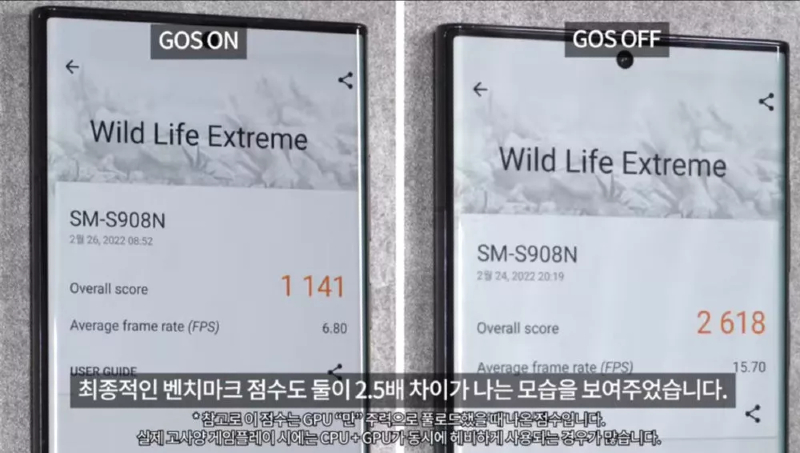 The list includes games and popular apps like Instagram, Netflix, Google Keep, Microsoft Office, and TikTok. What’s surprising is that Samsung’s own apps are included in the list, such as Secure Folder, Samsung Cloud, Samsung Pay, Dialer, and Samsung Pass.

Unsurprisingly, benchmark apps like 3DMark, AnTuTu, PCMark, GFXBench, and Geekbench 5 aren’t listed because Samsung doesn’t want to throttle benchmark apps. But a Korean YouTuber changed the 3DMark package name on the Galaxy S22 to reflect Genshin Impact, which is on the list and ran the benchmark. The renamed package achieved a drastically lower benchmark score and average frame rate.

Smartphone brands need to find a perfect middle ground. On one side it’s understandable that OEMs want to strike a balance between performance and battery life for many apps but there’s also an argument from users that they aren’t getting the performance they asked/ paid for. Since the benchmark apps aren’t listed here, the synthetic benchmarks shouldn’t be considered as a representation of the actual user experience.

“In order to meet the needs (sic), the Game Booster lab in the Game Launcher app will soon implement a software update that provides a performance priority option.”

Samsung has acknowledged the issue and is apparently investigating the GOS issue. According to the information on Naver, the South Korean giant is taking the internal investigation and approaching the issue as seriously as the Galaxy Note 7 battery explosions. It is expected to make an official statement soon.