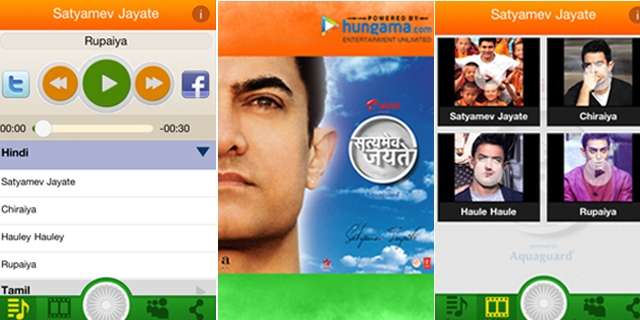 Sundays mornings in the Indian households are reserved for a thought provoking show called Satyamev Jayate which is produced and hosted by the famous Indian actor Aamir Khan. This show is based on social themes and regressive Indian customs like dowry, female foeticide etc. Judging by the popularity of the show Hungama Digital Media Entertainment Pvt. Ltd has decided to lauch its iOS application for mobiles. The songs shown at the end of the show as well videos of the entire episodes can be streamlined on this app. The app would get updated to incorporate new episodes. This iOS app will be available on iTunes at an affordable price of Rs.100 (or $ 1.99).

Socially active apps are becoming very popular these days and hence Airtel has tied up with the Satyameva Jayate app through its mobile money offer which enables viewers to donate money to support causes that are close to their hearts. The content related to this show can be shared easily by users with their friends. The app requires iOS 4.0 or higher. However it is compatible with a host of other devices like the  iPhone 3, iPhone4S,  iPad and iPod touch (3rd and 4th generation). Rumours are rife that an Android version of the application will be released for the android users. This application has become hugely popular and has bagged the top award for being an entertaining app. India today is finally waking up to such social causes as being shown on the show Satyameva Jayate. Along with downloading the app make sure to watch the live telecast of this show on Star Plus and Star World on Sundays.
ShareTweetShare