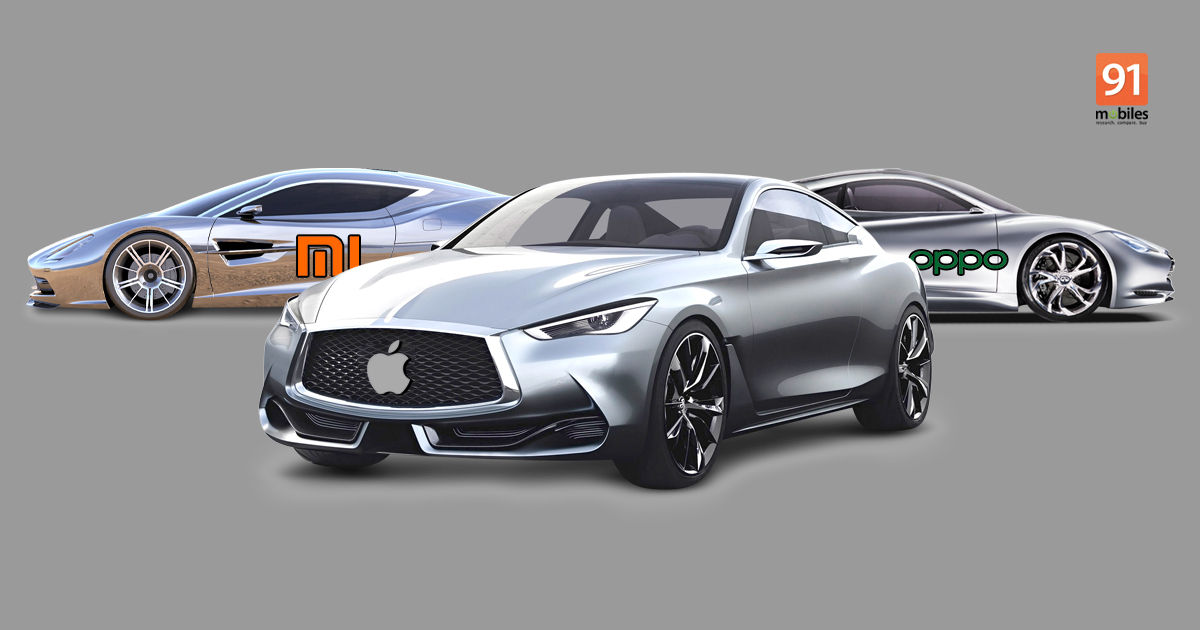 Electric vehicles are the next big thing, and most countries are making sure that most vehicles on road will be electric at least in the next 5 to 10 years. To bank on this upcoming change, smartphone manufacturers are now looking to launch electric vehicles in the coming years. Big names such as Apple, Xiaomi, OnePlus, OPPO, Vivo, and others are working on EVs. In the next two or three years, you may be able to buy electric scooters and cars from your favourite smartphone brand. Let’s take a brief look at the phone makers who’re working on electric vehicles.

Apple has reportedly been working on its own autonomous electric vehicle for several years under the codename Project Titan. A recent report states that the company’s EV will be ready by 2025 and will offer full self-driving mode. The car will be void of a steering wheel or pedals but will offer an emergency takeover mode. An infotainment system would be available in the middle of the dashboard, and the car would get limousine-like seating, wherein the passengers face each other. However, if the self-driving technology is not ready by 2025, then Apple may postpone the launch or reveal a less smarter electric car. At the moment, the company is testing its technology using Lexus SUVs.

Chinese smartphone giant Xiaomi is also developing its own electric vehicle. Xiaomi CEO Lei Jun recently confirmed that the company is on track to mass-produce its in-house electric car in 2024. The Chinese manufacturer set up its EV department back in March 2021 and is planning to invest over RMB 100 billion over the next three years. It also plans on raising more funds through external investors for the project.

There’s no information available on what type of electric car Xiaomi is working on. The company recently acquired DeepMotion, an autonomous driving tech startup, which means that we can expect some autonomous tech on the Xiaomi EV. We expect Xiaomi’s electric car to be available first in China, and it could take a while till it reaches other countries.

The BBK Group-owned smartphone brands — i.e. OPPO, OnePlus, Vivo, and Realme — are all said to be working on electric vehicles. These companies have already filed for trademarks, and it looks like most of them will also launch their EVs in India. We have no idea if these companies are working on electric cars or other EVs such as scooters, self-balancing scooters, self-balancing boards, and electric wheelchairs. 91mobiles exclusively reported that OPPO plans on launching its electric vehicles in India by late 2023 or early 2024.

Again, we do not have any technical or other details regarding what to expect from these companies. OnePlus had launched a teaser earlier this year for something called the Warp Car, but that seemed like an April Fool’s joke. However, it does look like OnePlus is also working on electric vehicles as the company has filed for patents. We can expect all these smartphone players to get in on the action soon, which is good for the consumer, as we’ll have more to choose from.

Another interesting development arose in the last month when iPhone contract manufacturer and parts supplier Foxconn announced that it too is getting a piece of the EV pie. The company has established a joint-venture with Taiwanese auto-maker Yulon Motors and revealed three prototype electric vehicles. The parts maker plans on building two passenger cars and one public bus. This shouldn’t really come as a surprise since Foxconn makes its own parts and chips for various smartphone makers, and it should be easy for them to develop tech for an electric car. The company didn’t reveal any dates as such, but we can expect EVs from Foxconn to be announced in the next 2-4 years.