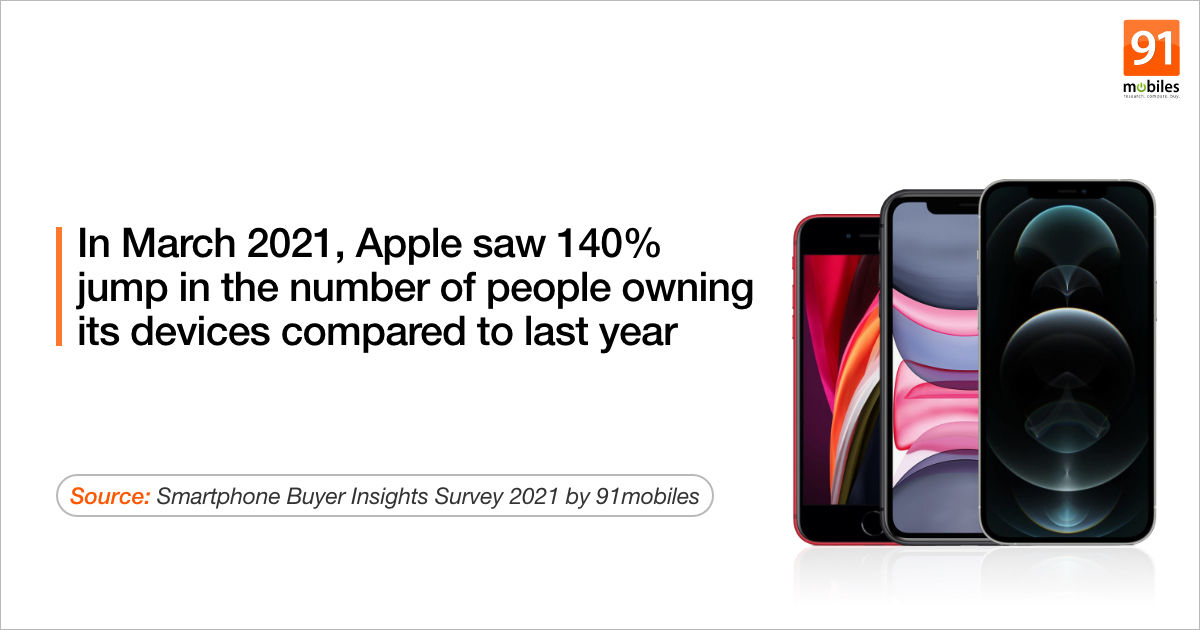 The do-it-all, most personal of gadgets… the ubiquitous smartphone, has grown even more important for us in recent times. As the world faces new challenges and unprecedented situations, the smartphone serves as the gateway of information, the hub of communications, and a window to the world, for most of us. The smartphone segment is the most dynamic arena in consumer technology, and brands keep coming up with newer models on a very frequent basis. But who are the people who’re buying all these devices? Which brands do people prefer the most? How are ownership patterns and brand loyalties shifting over time? How people decide on a new smartphone and what are the aspects that matter the most to them while buying one? Team 91mobiles conducts user surveys on a regular basis to answer questions like these, coming up with invaluable insights that show the real state of the smartphone industry in India. We’re back with the 2021 edition of our Smartphone Buyer Insights Survey (covering 15,000 responses), and over the next few days, will be presenting the numbers and the insights in great detail. For now, our focus will be on ownership patterns and brand loyalty. 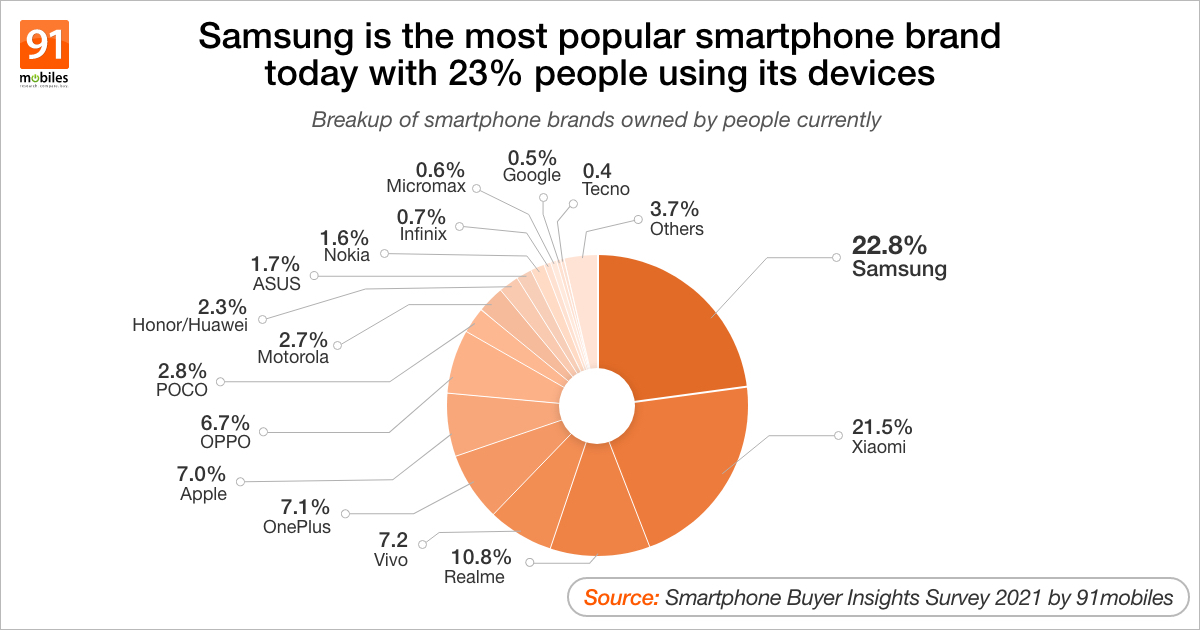 A gander at the breakup of smartphone brands owned by people currently tells us that Samsung is at the top with 22.8 percent ownership share, followed closely by Xiaomi with a share of 21.5 percent. This is in line with surveys we’ve conducted previously as well, so no surprises there. On number three sits Realme, with a 10.8 percent share, followed by Vivo, OnePlus, Apple, and OPPO. 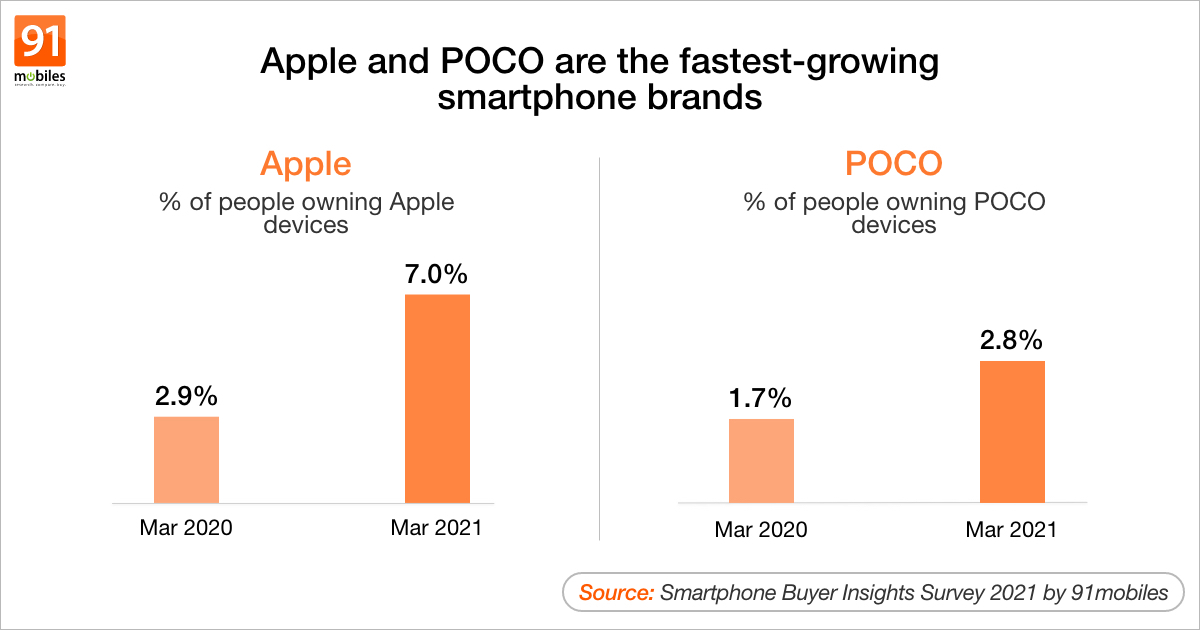 A few interesting insights can be drawn by comparing the figures from the current survey to responses from the last one. And if we do that, we can make out that Apple is showing a massive leap of about 140% this time, moving from an ownership share of 2.9 percent last year to a very healthy 7 percent this year. This can likely be attributed to its strong product lineup, which includes the very capable iPhone 12 series, along with affordable options like the iPhone SE 2020. A few older models like the iPhone 11 have also been quite popular and are selling well even now, thanks to various discounts and price cuts.

Samsung’s ownership share has also increased marginally, based on survey data, moving from 21.3 percent last year to 22.8 percent in 2021. The Korean brand continues to launch multiple smartphones across different price points, spanning its A, M, F, and flagship S series. Its efforts in the affordable flagship space, thanks to compelling devices like the S10 Lite, Note 10 Lite, and more recently, the S20 FE, would have likely contributed to that growth as well. 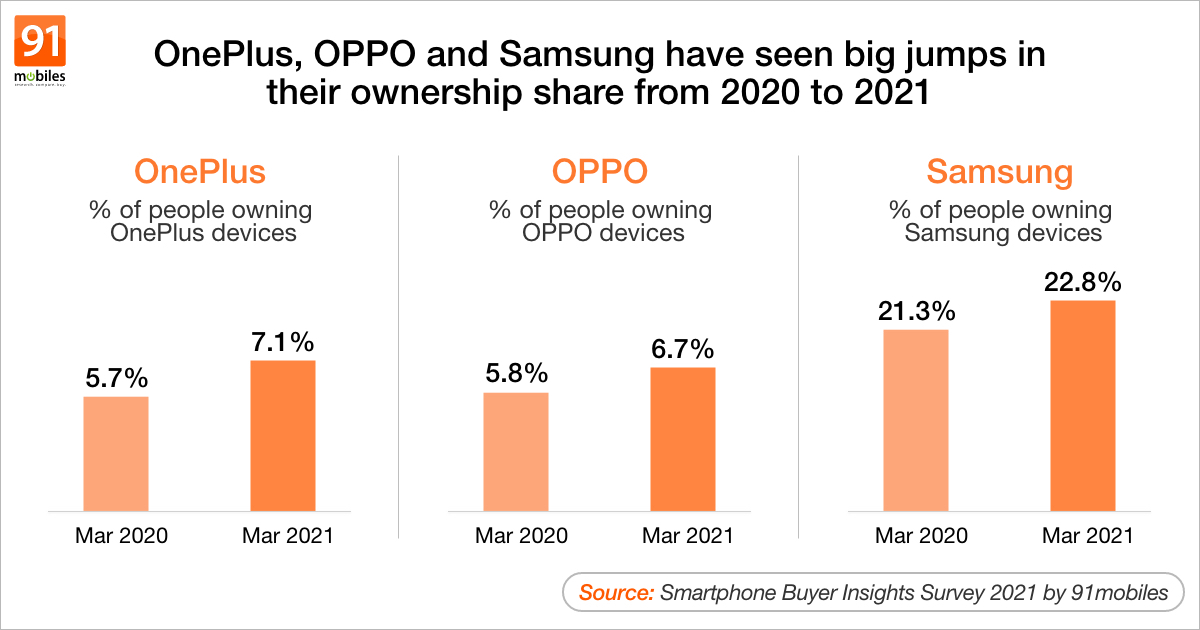 The other brands that have shown a jump in ownership share include OPPO, OnePlus, and POCO. Notably, OnePlus has made a comeback in the mid-range segment with the very impressive Nord, while POCO is trying to carve its own identity away from the shadow of its former parent brand Xiaomi, introducing value-for-money devices as well (the POCO X2 and X3 stand out from last year). These are the reasons that could form the basis for the growth they’re witnessing now, as least as far as the numbers from our survey are concerned. 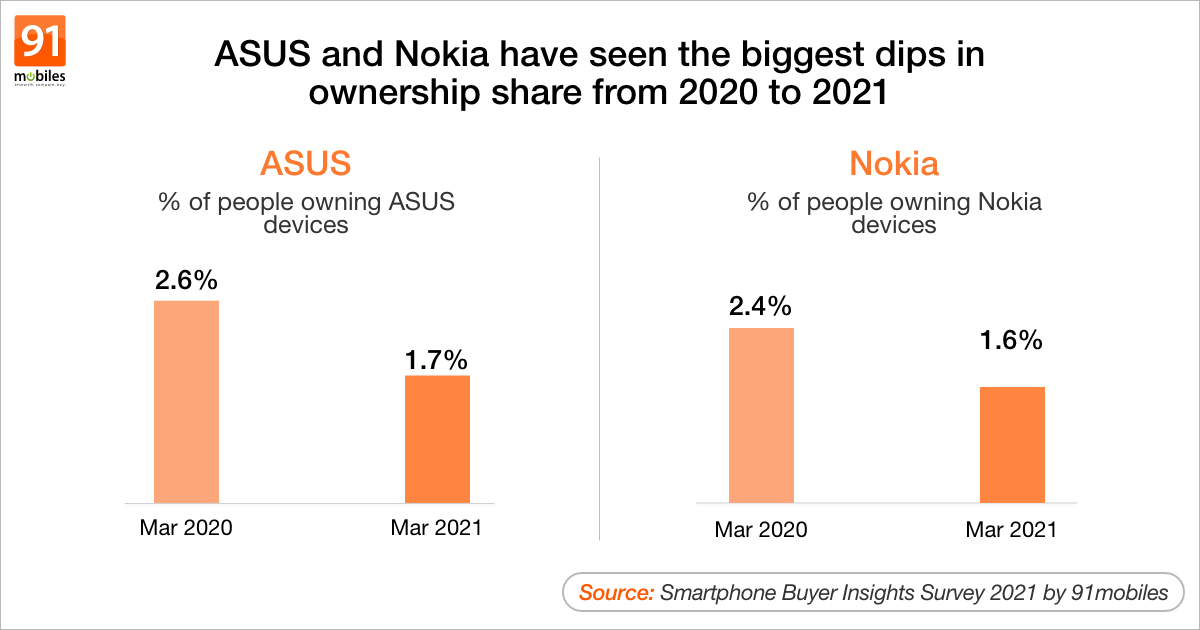 On the other hand, the brands that have declined in ownership share include Motorola, ASUS, and Nokia. While ASUS seems to have now focussed its attention mainly on the gaming audience with its ROG series of phones, the likes of Motorola and Nokia just don’t seem to have enough devices that stand out among the crowd. Brand Xiaomi has also shown a marginal decline over the last year, dropping from 23.4 percent to 21.5 percent. This could be the result of strong competition from Realme, which has been launching multiple smartphones across overlapping price points, especially in the affordable and mid-range categories, which is also the turf that Xiaomi is popular in. 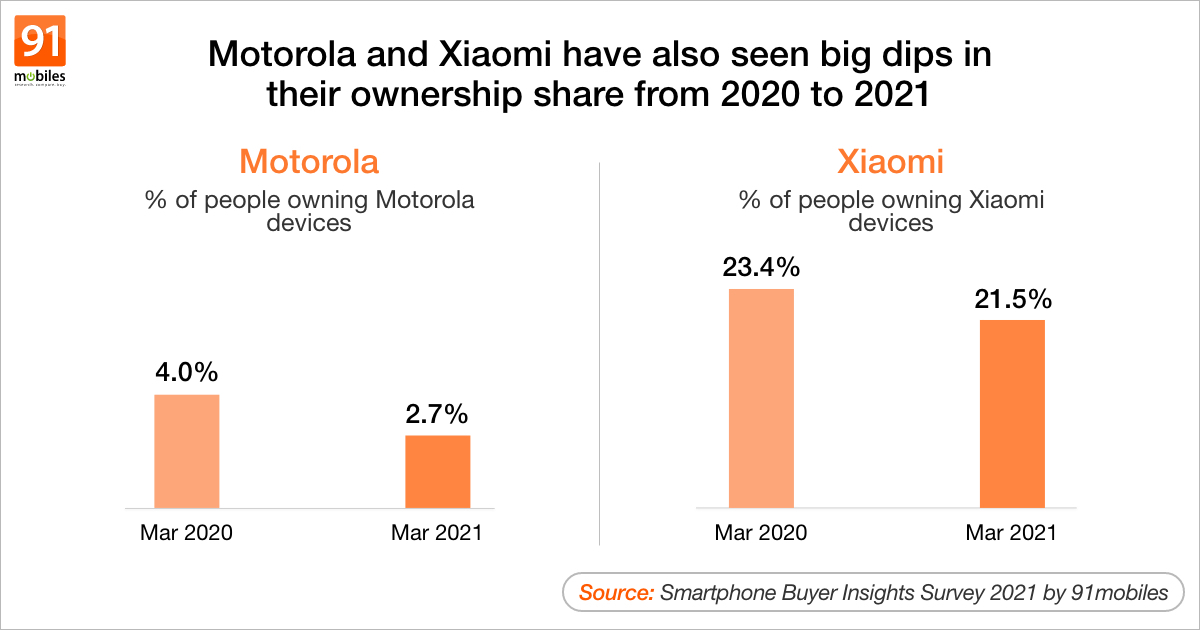 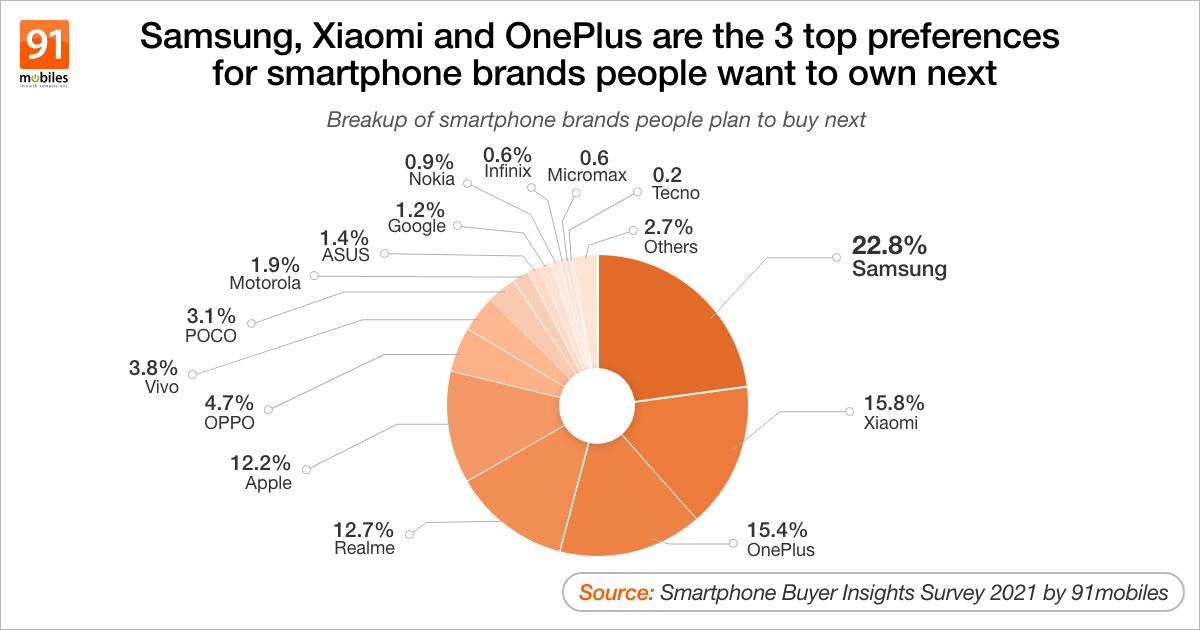 One of the questions we asked users as part of the survey pertained to what smartphone they planned to buy next, whenever they upgrade their current daily drivers. Based on the responses, it appears that Samsung will continue to lead in terms of ownership share, with 22.8 percent respondents saying they’d buy a Samsung phone next. This is followed by Xiaomi (15.8 percent), OnePlus (15.4 percent), Realme (12.7 percent) and Apple (12.2 percent). Worth mentioning here that Apple’s heathy numbers here could be aspirational, since many want to flaunt the iconic brand’s devices. 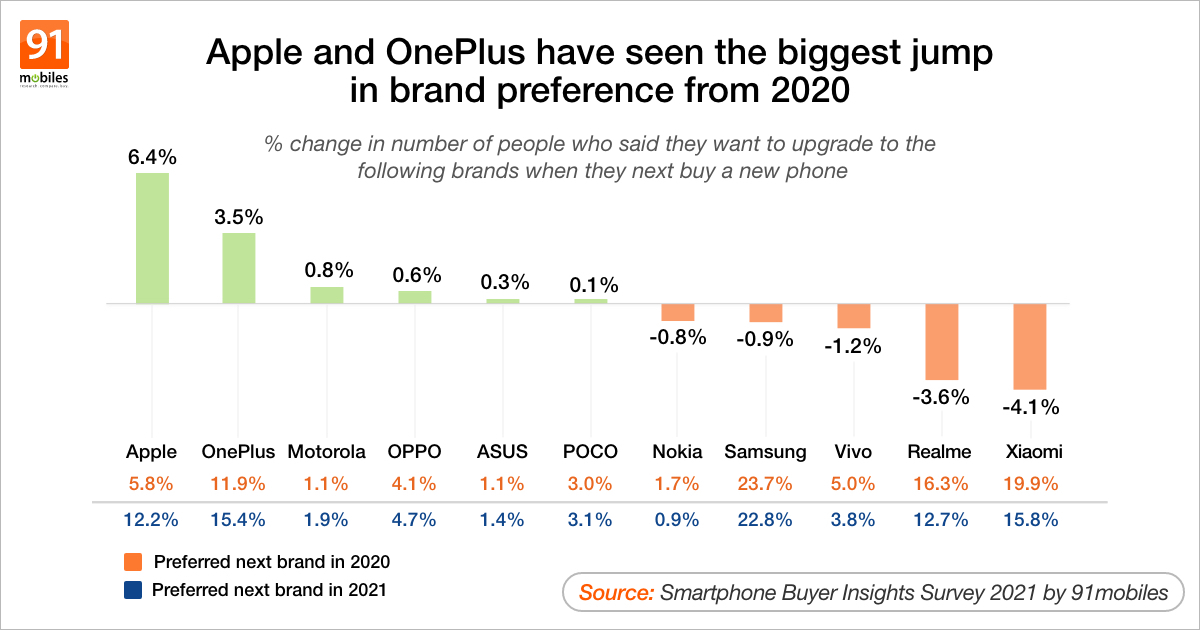 Comparing the data and responses between 2020 and 2021, we can make out that while 5.8% respondents said they wanted to buy Apple iPhones when we conducted the survey last year, the number has jumped to 12.2 percent this year, representing a jump of 6.4 percent. Similarly, OnePlus is showing a jump of 3.5 percent, and surprisingly, Motorola is also showing a small growth of 0.8 percent. The brands that have shown a decline are Nokia, Samsung, and Vivo. The biggest drop here has been logged by Realme (a drop of 3.6 percent), and Xiaomi (a drop of 4.1 percent). We suspect that in both these cases, a convoluted product strategy might have contributed to the decline. Xiaomi had quite a few devices in its Redmi 9 series lineup last year, while Realme also had quite a few phones with overlapping positioning. 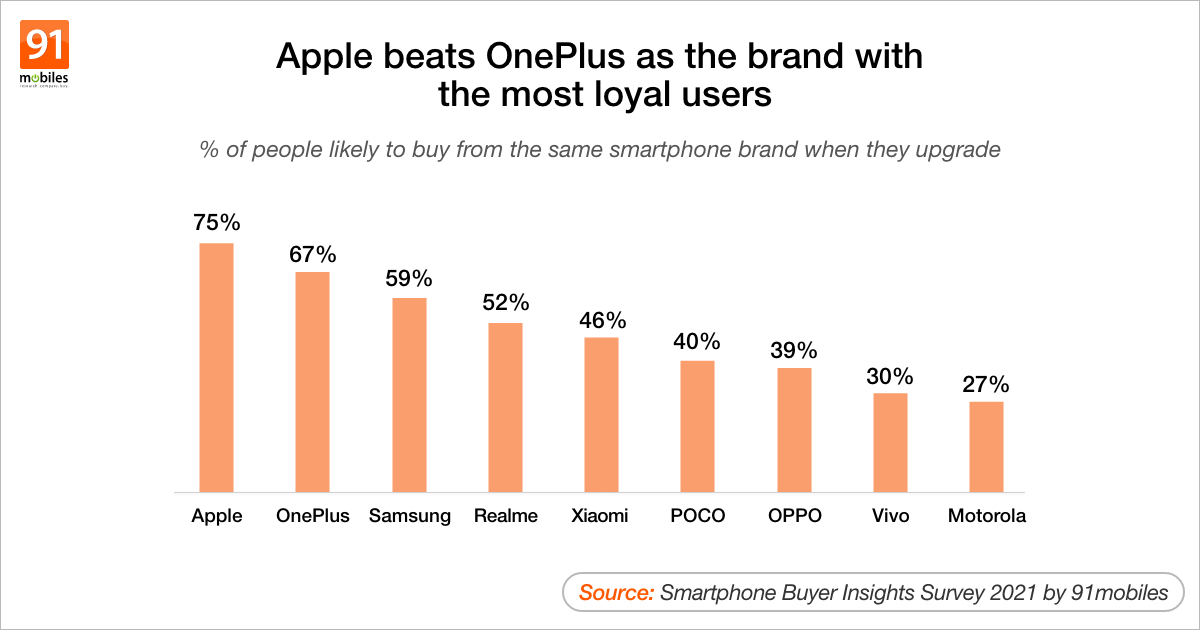 Brand loyalty is a vital metric, showing the number of users who are likely to stick to the same smartphone brand they’re currently using whenever they upgrade next. Unsurprisingly, Apple tops the list with 75 percent of its current users saying they’d buy another iPhone when they upgrade. Apple is followed by OnePlus, with 67 percent users voting in its favour. Next up is Samsung with 59 percent, Realme with 52 percent, Xiaomi with 46 percent, and POCO with 40 percent. 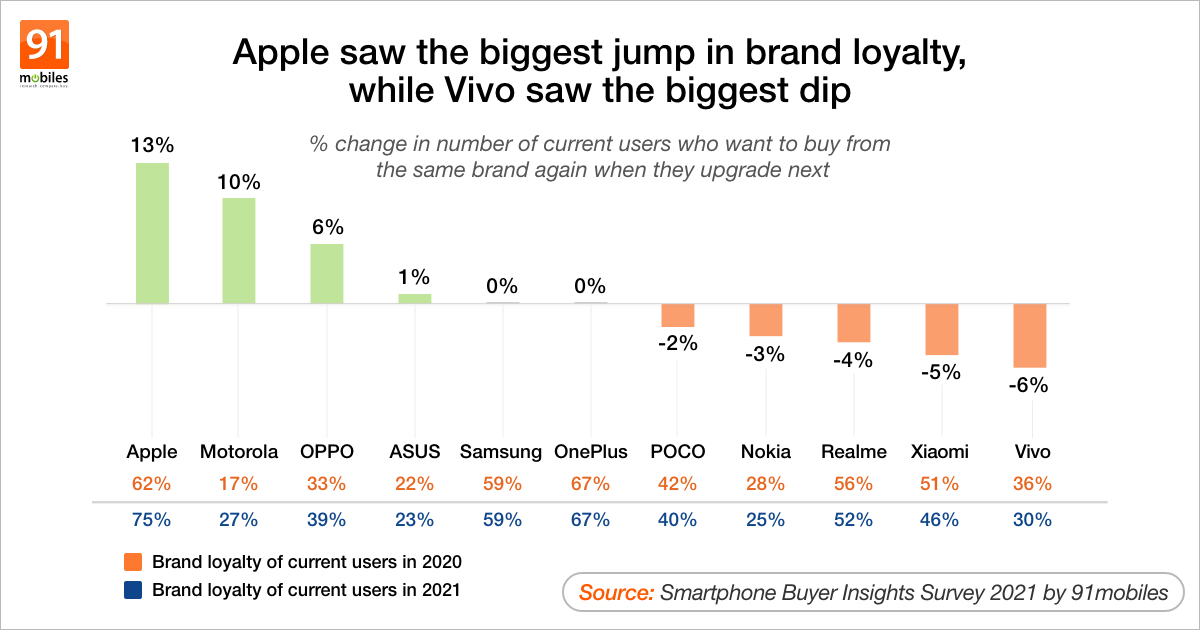 Again, comparing these figures with the data from last year, we see that Apple’s brand loyalty has moved up this year by 13 percent. Surprisingly, Motorola has also seen a jump of 10 percent, while OPPO is showing a jump of 6 percent. Motorola’s One Fusion+, which came across as a worthy option last year, could have possibly contributed to the brand’s upward swing, along with a few models that do seem promising.

The brands that show a decline include Nokia, Realme, Xiaomi, and Vivo. While Nokia’s decline seems due to the absence of enough compelling options in its lineup, users of brands like Realme and Xiaomi could possibly be looking to move to more premium options from the likes of Samsung and OnePlus, explaining the drop in the number of users who want to buy their next smartphones from these brands.

We have tons of more insights coming up, based on the data from the 91mobiles Smartphone Buyer Insights Survey 2021. Watch this space.