91mobiles.com
Home Feature 9 in 10 people are considering buying a 5G phone next: 91mobiles... 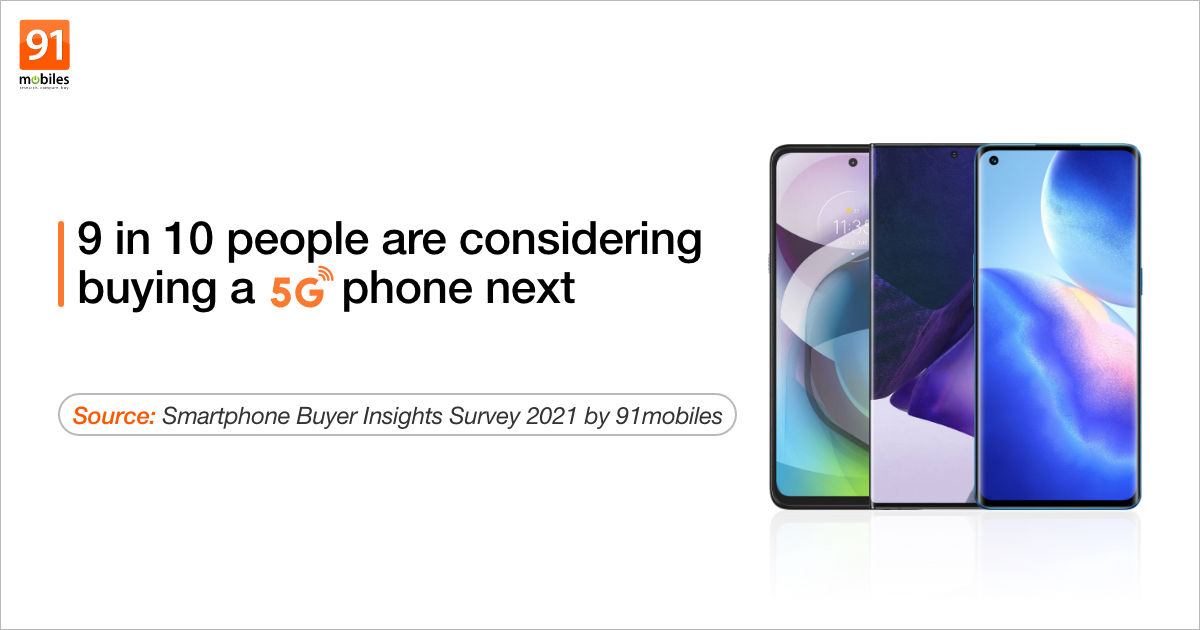 Our quest to unearth insights on how people use, search for, and buy smartphones is never-ending, and that is exactly the objective behind our Smartphone Buyer Insights Survey. In fact, we have recently wrapped up the 2021 edition of this survey and already have some insights out on ownership patterns and brand loyalty. Now, it’s time to look at a few other aspects of smartphone purchase and research behaviour… specifically on how people decide on a new smartphone and the aspects that matter to them the most while shortlisting the ones they want to buy.

As we dive into smartphone purchase behaviour, one of the first things we want to find out the reasons behind people wanting to buy a new daily driver. This throws up some interesting numbers. Surprisingly, it turns out that almost 60 percent people want to buy a new smartphone just to get an upgrade. This includes 46 percent who want the latest smartphone (or one that’s better than their current one), and almost 13 percent who buy a new device when they come across a deal they don’t want to miss. Another interesting point to note here is that based on our survey data, men are likely to buy a new phone just for an upgrade, as compared to women.

34 percent folks buy a new phone when their existing devices smart giving them trouble, or just don’t work as well as they used to. 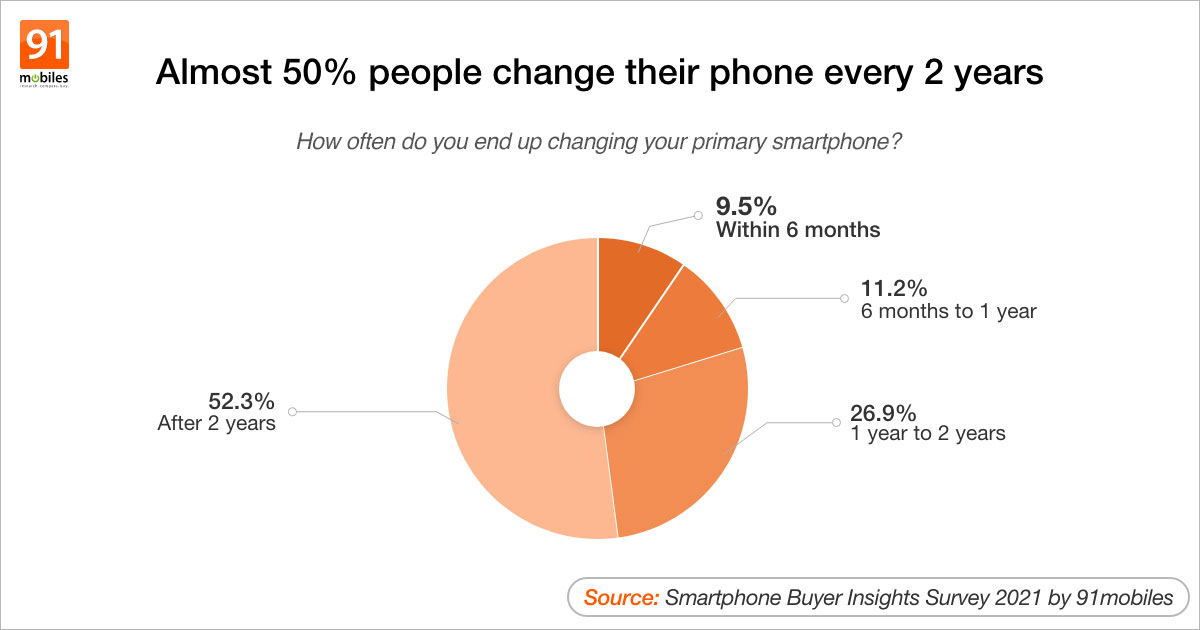 One of the most important data points, especially from the point of view of smartphone manufacturers, would be numbers on how frequently people upgrade. Based on responses from our survey, it appears that almost 50 percent users change their phone every 2 years. Another 27 percent do so within 1 to 2 years. These numbers are extremely vital, and possibly explain why companies are eager to offer 5G-enabled phones in a country where 5G networks aren’t available yet… and consumers are lapping them up too. In fact, as per survey data, almost 90 percent survey respondents are considering buying a 5G phone next. 5G networks are expected to be commercially available within a year or so, so it’s understandable why the feature is in demand, especially keeping in mind that a large chunk of users only switch to a new phone every 2 years. Pretty much all flagships are 5G-capable these days, and the feature is now available in the mid-range and affordable segments too. Worth mentioning that about 20 percent respondents change their phones within a year itself, with half of them choosing to buy a new device within a mere six months. 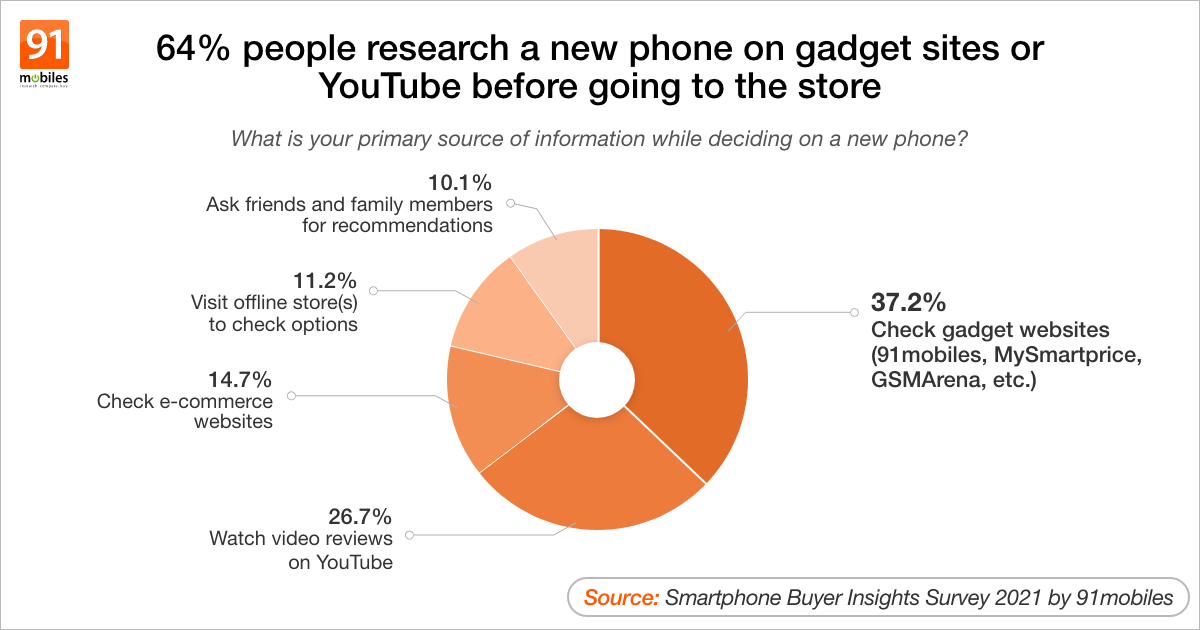 Coming to how people decide on a new smartphone, we have quite a few interesting stats as well. As part of the survey, we asked users about their main sources of information while deciding which phone to buy. Based on the analysis of the responses, it’s clear that online is the primary mode of research for a vast majority, with 37 percent people choosing gadget websites like 91mobiles, 27 percent voting for YouTube, and 15 percent saying they check e-commerce websites, when they want to buy a new smartphone. Just about 11 percent respondents said they prefer visiting offline stores to check options, while another 10 percent depend on advice from friends and family. 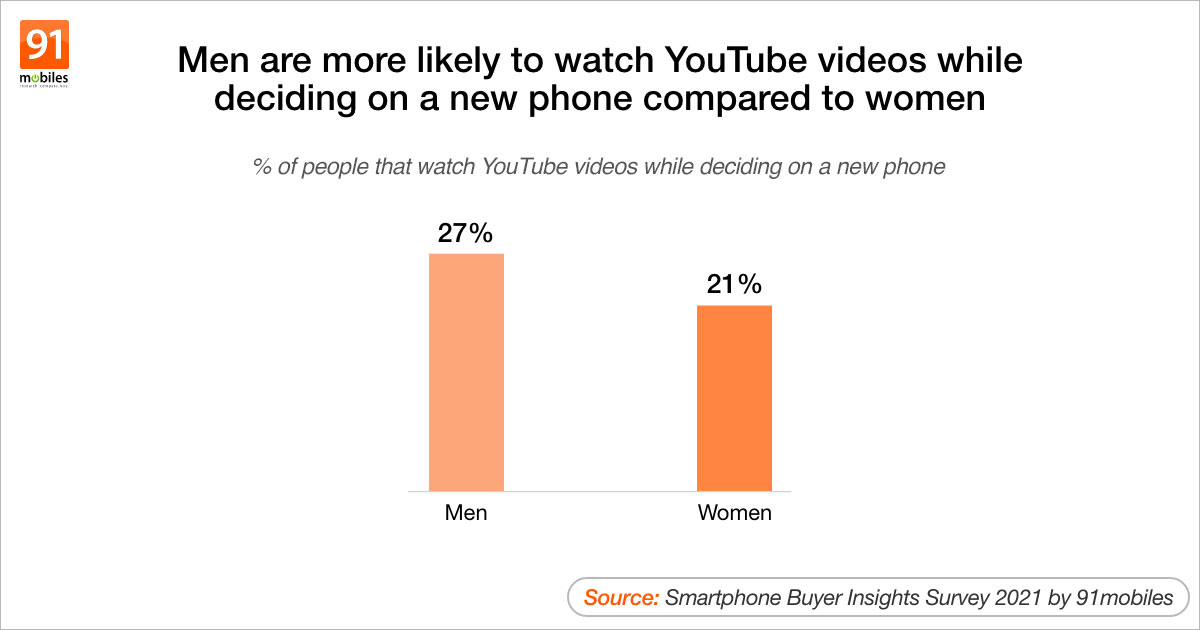 Another interesting stat is that among the 64 percent who check gadget websites or YouTube videos while deciding which phone to buy, the share of men is higher than women.

Aspects that matter the most

A smartphone is called the Swiss Army knife of the gadget world for good reason. It dons multiple hats, switching from a communications device to a video streamer, a navigation device, a music player, a camera, and more…. almost instantaneously. But what are the attributes that matter the most to people, when they set out to buy a new phone? 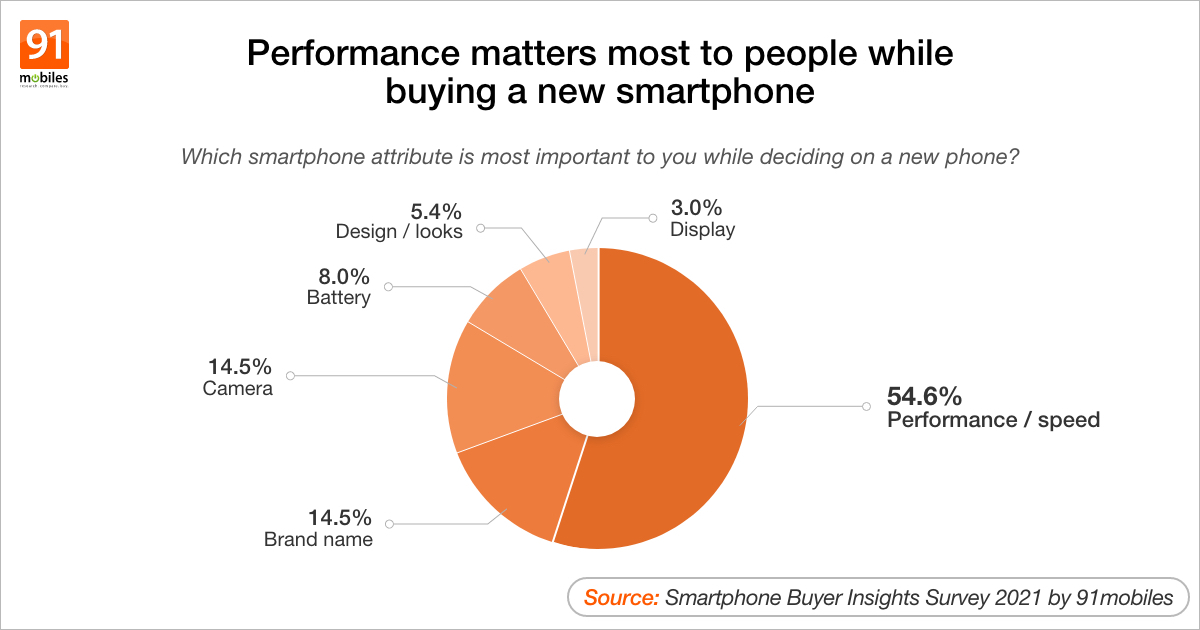 How do people evaluate smartphone performance while buying 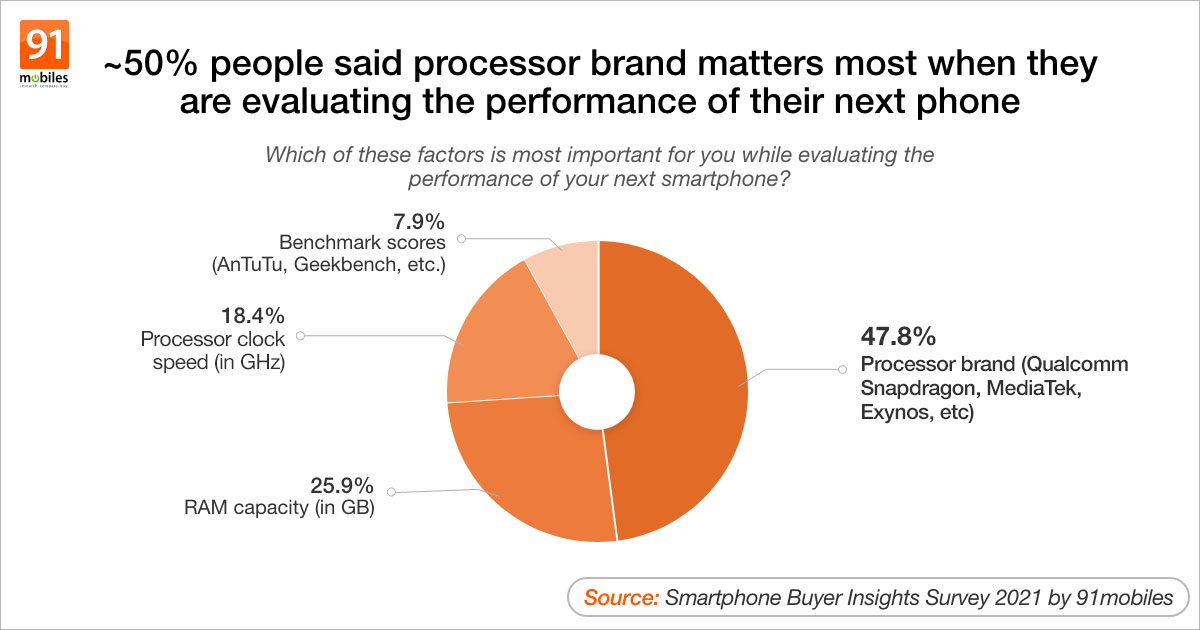 Since smartphone performance or speed is a vital parameter from a purchase decision point of view, we asked users how they evaluate it. Almost half (47.8 percent to be exact) users said they take processor brand as the most important metric for evaluating a phone’s performance. The key players in terms of the processor brand include the likes of Qualcomm Snapdragon, MediaTek, Exynos, etc.

Another 26 percent voted in favour of RAM capacity, while 18.4 percent chose processor clock speed as the most crucial parameter for evaluating a phone’s performance. About 8 percent respondents voted for benchmark scores.

Of course, we also have data related to user demographics: 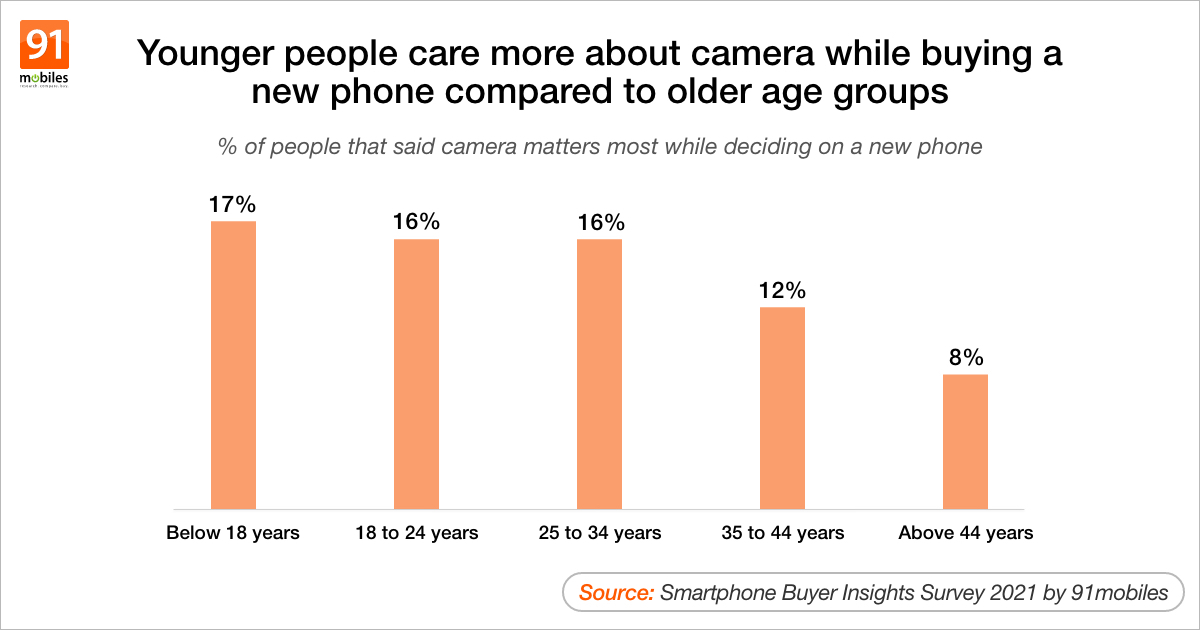 How do people evaluate camera capability while buying 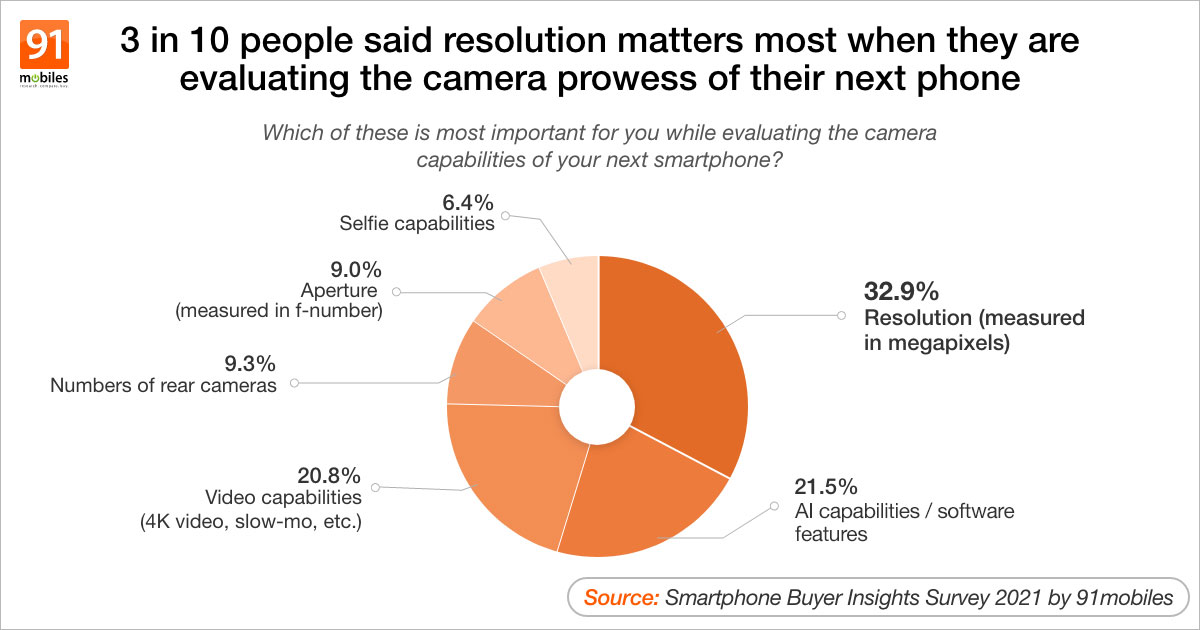 We also asked users about new and upcoming phones that excited them the most. In terms of flagships, the maximum votes went to the OnePlus 9 series (17.6 percent), closely followed by Xiaomi Mi 11 series and the iPhone 13 lineup. Moving on mid-range and affordable smartphones, the Realme 8 series tops the list with 18.5 percent votes, followed by the Samsung Galaxy A52 (12.7 percent), Galaxy M62 (9.5 percent), Pixel 5a (8.4 percent), and OPPO F19 series (8.1 percent).

More insights from the 91mobiles Buyer Insights Survey 2021 coming up soon, so do watch this space.