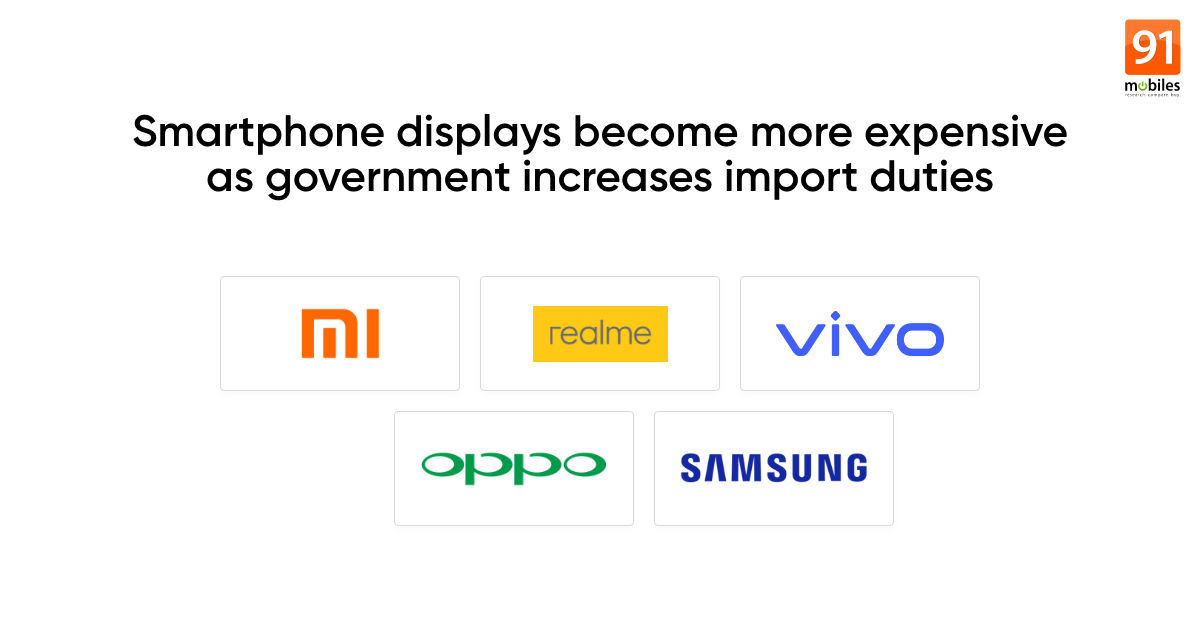 Smartphone prices in India are set to increase further as the government has raised the import duty on displays and touch panels to 10 percent. With the additional cess, the increased import duty amounts to 11 percent of the display/ touch panel’s cost. This move, under the ‘Atmanirbhar Bharat’ campaign, is aimed at pushing local manufacturing of displays and touch panels, which account for roughly 15-25 percent of the cost of a smartphone. While official statements from major smartphone brands, such as Samsung, Xiaomi, OPPO, Vivo, and Realme, are still awaited, estimates suggest feature phone and smartphone prices in India will increase by about 1.5 percent to 5 percent this festive season. If you are wondering why this move was implemented at such a critical time for the industry and what its impact on the consumer will be, here’s an explainer that covers everything you need to know about this development.

How much more will consumers have to pay?

A smartphone priced at Rs 10,000 may now cost consumers Rs 10,500. On the other hand, even the more expensive models, such as those priced around Rs 25,000, may only see a Rs 500 increase since higher profits will allow companies to absorb the additional costs.

With the new import duty, smartphones priced above Rs 10,000 are expected to cost about 5 percent more. This means a smartphone that was priced at Rs 10,000 may now cost consumers Rs 10,500. On the other hand, even the more expensive models, such as those priced around Rs 25,000, may only see a Rs 500 increase in prices since companies are expected to absorb the additional costs. This is possible due to the relatively higher profits the brands make on a mid-range phone than on a budget handset.

Feature phones and smartphones priced under Rs 5,000, on the other hand, are expected to see an increase of about Rs 150-200. This may have a greater impact on the buyers since small price hikes affect the entry-level segment worse.

Brands, as mentioned earlier, are yet to make an announcement in this regard though. We will have to wait for an official word from major players such as Xiaomi, Samsung, OPPO, Vivo, OnePlus, etc., to see how much more smartphones will cost going forward.

Why did the government increase import taxes?

The objective of this increase in import duty of displays and touch panels is to promote local manufacturing of display panels since smartphone brands operating in India import these panels from China, South Korea, etc. While this increase in import taxes — in effect since October 1st this year — may seem abrupt, it has been in the pipeline for over a year. It was actually slated to go into effect on April 1st, 2019, but had been pushed back twice as the mobile industry appealed to the government for deferments. However, the government did not budge on the rollout this time, despite the industry urging for another delay.

What does the smartphone industry say?

The import duty hike should have been rolled over due to exceptional circumstances caused by the COVID-19 pandemic: Industry body India Cellular Electric Association (ICEA)

Industry body India Cellular Electric Association (ICEA) Chairman Pankaj Mohindroo said this delay in ramping up local display manufacturing was “a rare miss” for the smartphone industry. Nonetheless, Mohindroo says the import duty hike “should have been rolled over due to exceptional circumstances,” referring to the COVID-19 pandemic. The industry is estimated to see a cost escalation of roughly Rs 50,000 crores due to this duty hike. The body counts Xiaomi, Apple, Motorola, Nokia, OPPO, Vivo, Realme, LAVA, Micromax, and Karbonn, as well as contract manufacturers Foxconn, Wistron, and Dixon, as members.

At the moment, only four vendors in India operate display and touch panel manufacturing units: Holitech, TXD, LCE, and CSOT. However, their production capacity is just 13.9 million for smartphone displays and only 11.4 million for feature phones until this October. With over 50 million smartphone sales estimated for the July-December 2020 period, the manufacturing capacity is clearly insufficient compared to the demand. Setting up a display production facility can cost a manufacturer as much as Rs 300-400 crores and may take as long as two years to become operational.

The Indian smartphone industry has been reeling from the double whammy of supply chain constraints due to COVID-19 and GST increase. Add to this the costs of setting up display manufacturing units and the never-ending appetite for smartphones among Indian users, it seems consumers may end up shelling more for smartphones in the short term as these devices become critical to online learning, work, etc.