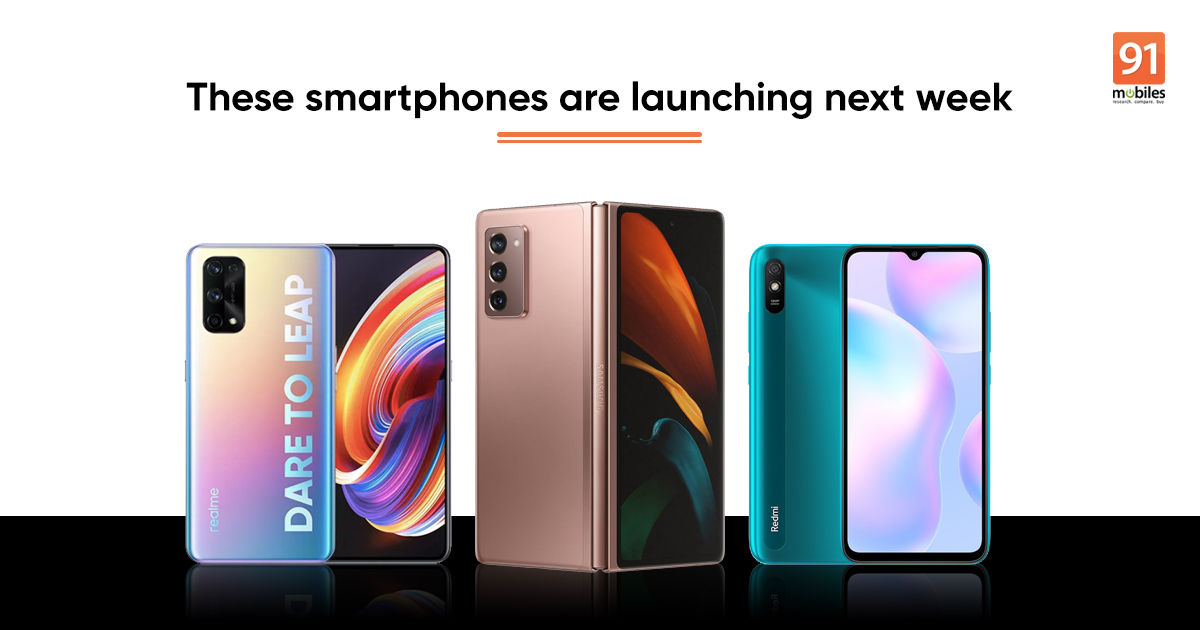 Tons of new smartphones were launched in India and globally in the month of August,  such as the Samsung Galaxy Note 20 series, Nokia 5.3, Moto G9, Realme C15, Redmi 9 Prime, and so on. It looks like September is going to be an equally crazy month for smartphone launches with a bunch of phones ready to be announced from the first week itself. This week, brands like Xiaomi, Realme, OPPO, and Samsung are set to launch brand new phones in the country and around the world. These include the Realme X7 series, Redmi 9A, Samsung Galaxy Z Fold 2, Realme 7 series, and OPPO F17 series.

Redmi 9A: launching on September 2nd

Xiaomi has been launching one Redmi 9-series phone after another over the past several months and the company is ready to launch another one on September 2nd. The Redmi 9A will arrive as an entry-level smartphone that will be priced below the newly launched Redmi 9. The Redmi 9A is already available in Malaysia and it comes with a 6.53-inch HD+ (1600×720) LCD display, MediaTek Helio G25 chipset, 13MP primary camera, and 5,000mAh battery.

OPPO F17 series will go official in India on September 2nd. The company will be launching the OPPO F17 and F17 Pro models, both of which are confirmed to be priced under Rs 25,000. The OPPO F17 Pro, in particular, will be among the sleekest and lightest mid-range phones in its segment. OPPO has also revealed that the Pro model will come with a 48MP quad-camera setup and 16MP Dual Depth selfie camera system at the front. Meanwhile, the vanilla OPPO F17 is rumoured to launch with a 6.44-inch FHD+ sAMOLED display, Snapdragon 662 chipset, 16MP quad-camera setup, and 30W fast charging support.

Soon after the Realme X7 launch in China, the company will unveil the Realme 7 series in India. The Realme 7 and 7 Pro smartphones are set to succeed the Realme 6 series and will boast powerful mid-range specifications. The phones are already confirmed to come with a punch-hole display, 64MP quad cameras, and up to 65W fast charging support. Realme is yet to reveal details such as the phones’ processors, battery capacities, and displays.

Samsung announced the Galaxy Z Fold 2 alongside the Galaxy Note 20 series last month, but the company plans to officially launch the foldable phone on September 1st. The Unpacked Part 2 event will see Samsung talk in-depth about the Galaxy Z Fold 2 and will likely reveal the price and full specifications as well. The successor to the Galaxy Fold offers a 6.2-inch bezel-less Infinity-O display on the cover and a 7.6-inch Infinity-O foldable display. Samsung is also offering a 120Hz refresh rate, triple rear cameras, and a 4,500mAh Dual Intelligent battery.

These are some of the phones that we know for sure are launching this week in India and globally. A lot more phones are expected to launch this month, including the Samsung Galaxy M51 in India and the POCO X3 globally. 91mobiles will be on top of, so stay tuned to this space for the latest in smartphone launches.