91mobiles.com
Home News These 5 brands are not attending MWC 2020, the biggest tech event... 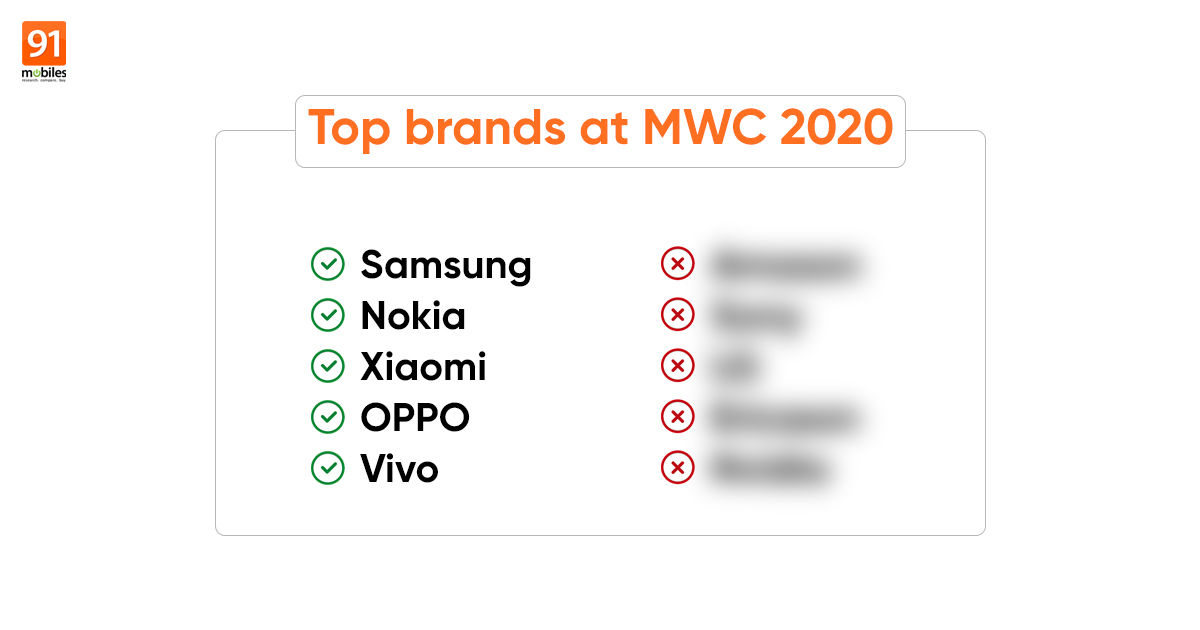 Some major companies are withdrawing from Mobile World Congress (MWC) 2020, which is set to begin from February 24th, over coronavirus concerns. Brands have cited public health and safety of employees, customers, and stakeholders among the reasons for not attending the biggest tech trade show in Barcelona, Spain. Declared a public health emergency by the World Health Organization (WHO), coronavirus is a pneumonia-like illness that, as of February 10th, has killed over 900 people. The virus outbreak has mostly affected China – which is home to a number of companies that make for a huge proportion of attendees at MWC every year.

Amazon will not be attending MWC 2020 citing fears over coronavirus. “Due to the outbreak and continued concerns about novel coronavirus, Amazon will withdraw from exhibiting and participating in Mobile World Congress 2020, scheduled for February 24th-27th in Barcelona, Spain,” the company’s spokesperson said in a statement to TechCrunch. It’s unclear what Amazon had on the cards for the upcoming trade show, but the company usually announces its hardware products and cloud services.

Sony has backed out from the MWC 2020 event as well. The Japanese multinational has been closely monitoring the evolving situation following the novel coronavirus outbreak. “As we place the utmost importance on the safety and wellbeing of our customers, partners, media, and employees, we have taken the difficult decision to withdraw from exhibiting and participating at MWC 2020 in Barcelona, Spain,” said Sony in a statement posted on its website. Rumours were rife that the vendor could launch its flagship Xperia 5 Plus at the event.

In addition to Amazon and Sony, LG is also backing away from MWC this year. The South Korean phonemaker’s mobility products created for the show would instead be shown at separate events in the “near future.” For now, LG has decided to withdraw from exhibiting and participating in MWC 2020 later this month in Barcelona, Spain. “This decision will prevent needlessly exposing hundreds of LG employees to international travel, which most health experts have advised,” the company added.

LG was expected to launch its flagship smartphone with Snapdragon 865 SoC at the event.

“The health and safety of our employees, customers, and other stakeholders are our highest priority,” said Ericsson’s President and CEO Börje Ekholm in a statement. “We were looking forward to showcasing our latest innovations at MWC in Barcelona. It is very unfortunate, but we strongly believe the most responsible business decision is to withdraw our participation from this year’s event.”

Ericsson has further added that it’ll be holding separate events at a later date to demo its products and content created for the MWC 2020 trade show.

Computer game company Nvidia is also pulling out from MWC 2020 citing public health risks around the coronavirus. “Ensuring the safety of our colleagues, partners, and customers, we regret not attending the upcoming tech trade show. We have been looking forward to sharing our work in AI, 5G, and vRAN with the industry, but believe this is the right decision,” per the company. It’s not clear what was the company planning to showcase at MWC this year.

While Samsung will be there, it won’t send as many executives to the world’s largest mobile conference as in years past. Xiaomi, Realme, Huawei, OPPO, Vivo, Motorola, and Nokia, among others are also expected to cut down their taskforces for the upcoming MWC 2020.

GSMA – the organization that runs MWC – has put out an updated statement to counter the spread of the coronavirus. Travellers from China’s Hubei province, where the outbreak began, will not be permitted access to the event. The rest of the visitors, who were in other regions of China, will need to prove that they have been out of the country 14 days beforehand. Additional medical personnel will also be on-site along with other measures to reduce the risks posed by the disease, including a no-handshake policy.