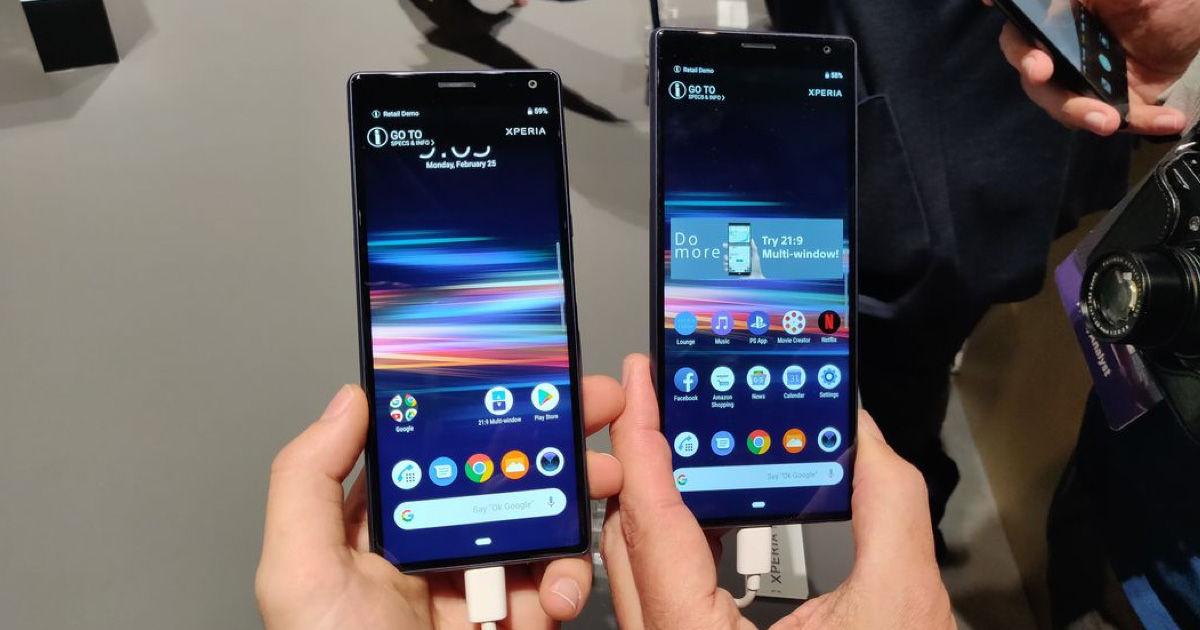 “Sony’s latest mid-rangers have been designed for video viewing”

Japanese tech giant Sony’s latest affordable smartphones, the Xperia 10 and the Xperia 10 Plus, have just been announced at the company’s MWC showcase, and seem to have been designed with video watching in mind. I managed to get my hands on them and here’s what I make of the devices. 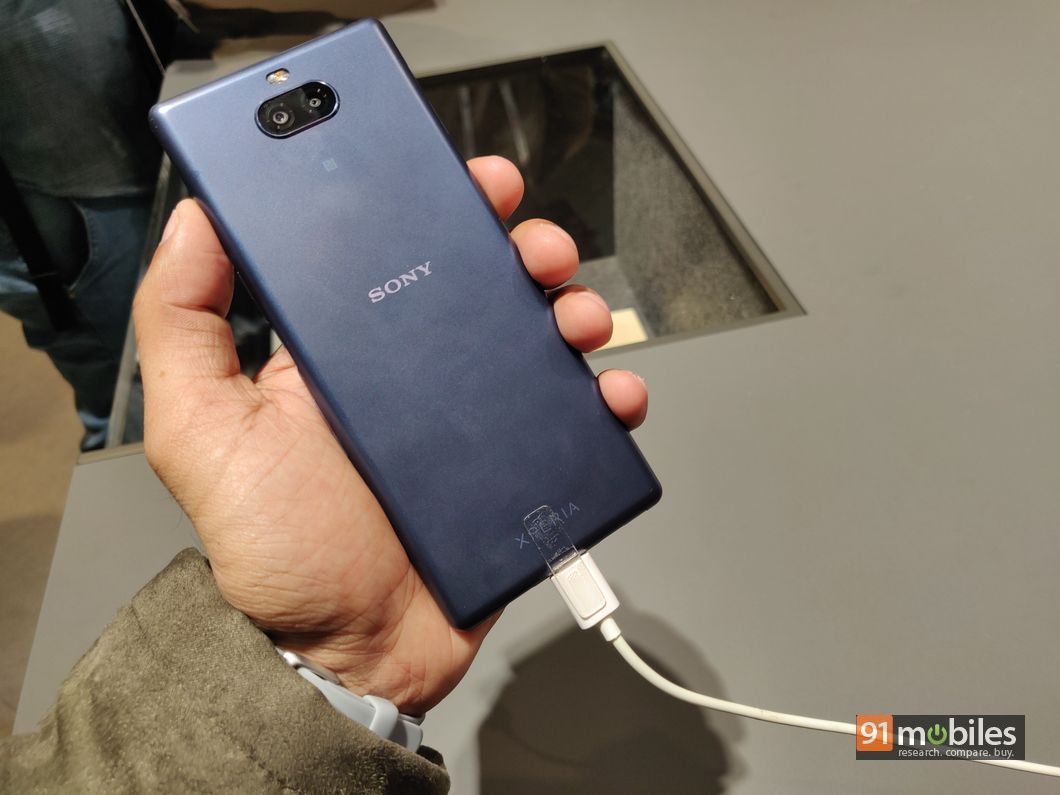 Both, the Xperia 10 as well as the Xperia 10 Plus draw parallels to each other in numerous ways. For starters, the handsets have been constructed using the exact same design language and from a distance, look identical. However, upon closer inspection, you’ll immediately notice the taller form factor of the 10 Plus as the device comfortably towers over the Xperia 10 by some margin. Now, the design in itself is quite subtle and both the phones retain the company’s iconic boxy appearance. However, from what I could pick up whilst chatting with fellow journalists on the show floor, the design of the new mid-rangers is extremely polarising. 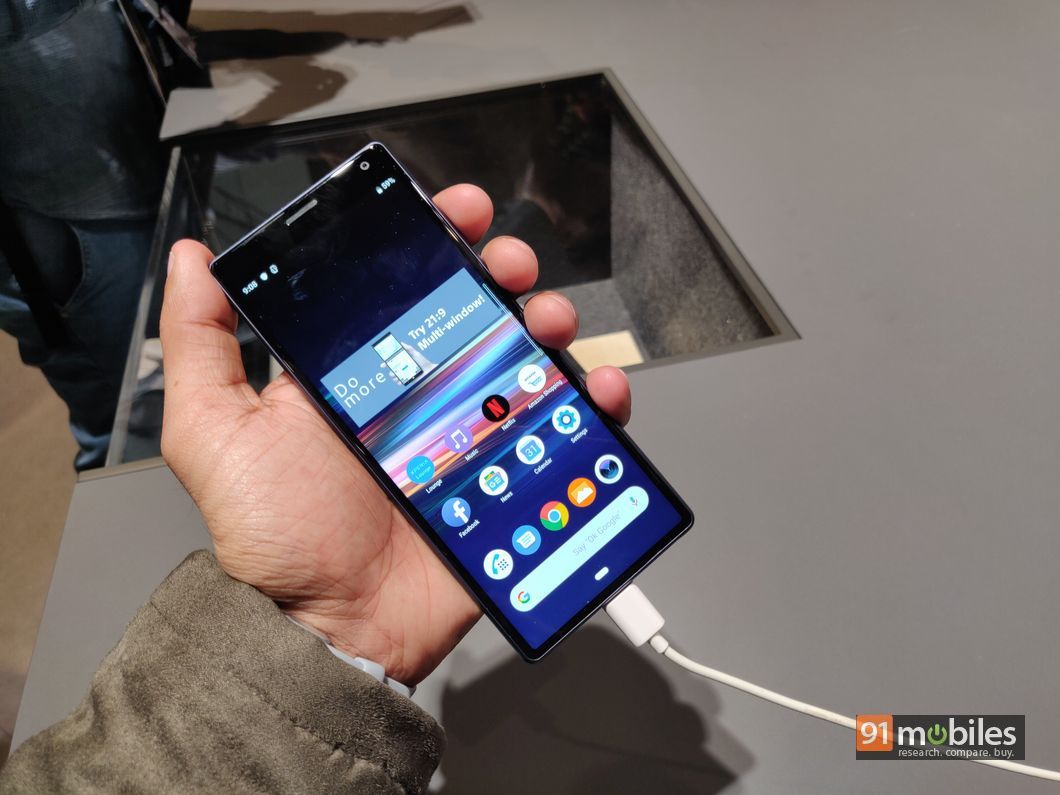 On one hand, I found like-minded people who appreciated Sony’s commitment to its design ethos and the handsets boxy look, whereas, on the other, there were talks about the new Xperia 10 models looking a bit too bland. Now, I’ll let you be the judge, so scroll through the attached gallery and let me know in the comments below what you made of the design of the Xperia 10 and the Xperia 10 Plus. 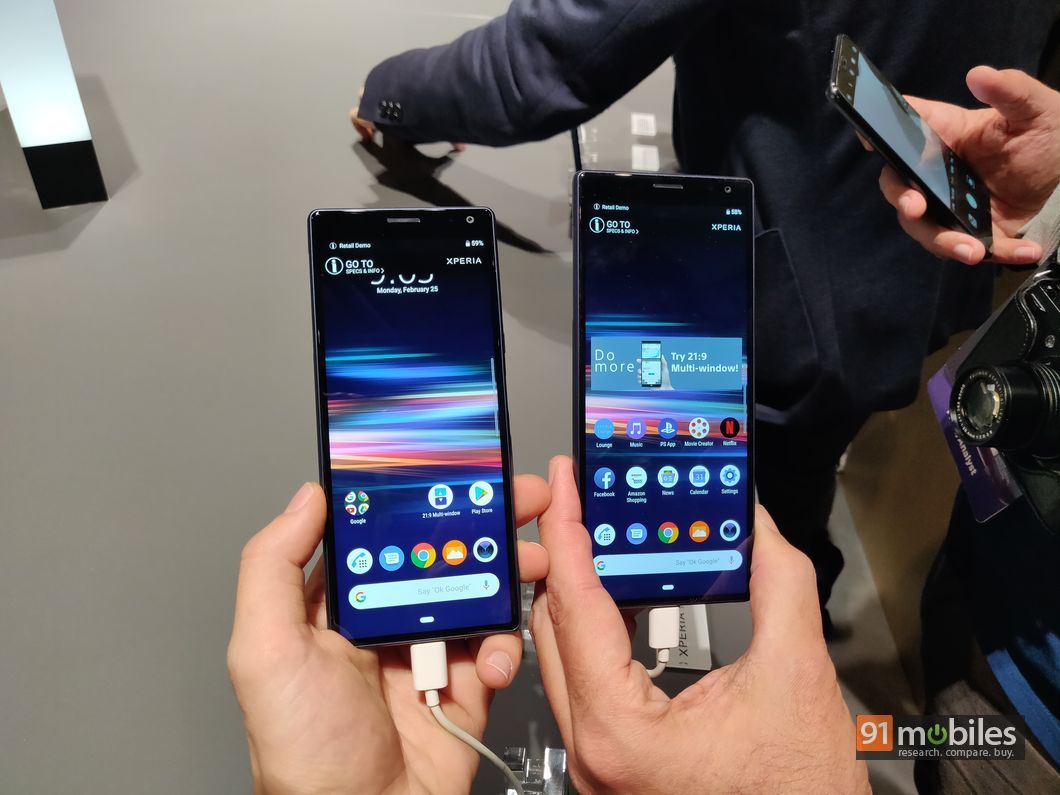 Seeing how both the smartphone sport a taller aspect ratio than most other devices in the market, they’re not the most comfortable handsets to use with just one hand. While I could acclimate myself to the Xperia 10’s form factor, try as I might, I couldn’t touch the corners of the 10 Plus without the phone sliding through my fingers. On the flip side, the added height works wonders for multi-tasking, and you can comfortably open two apps on the handset’s screen at once. 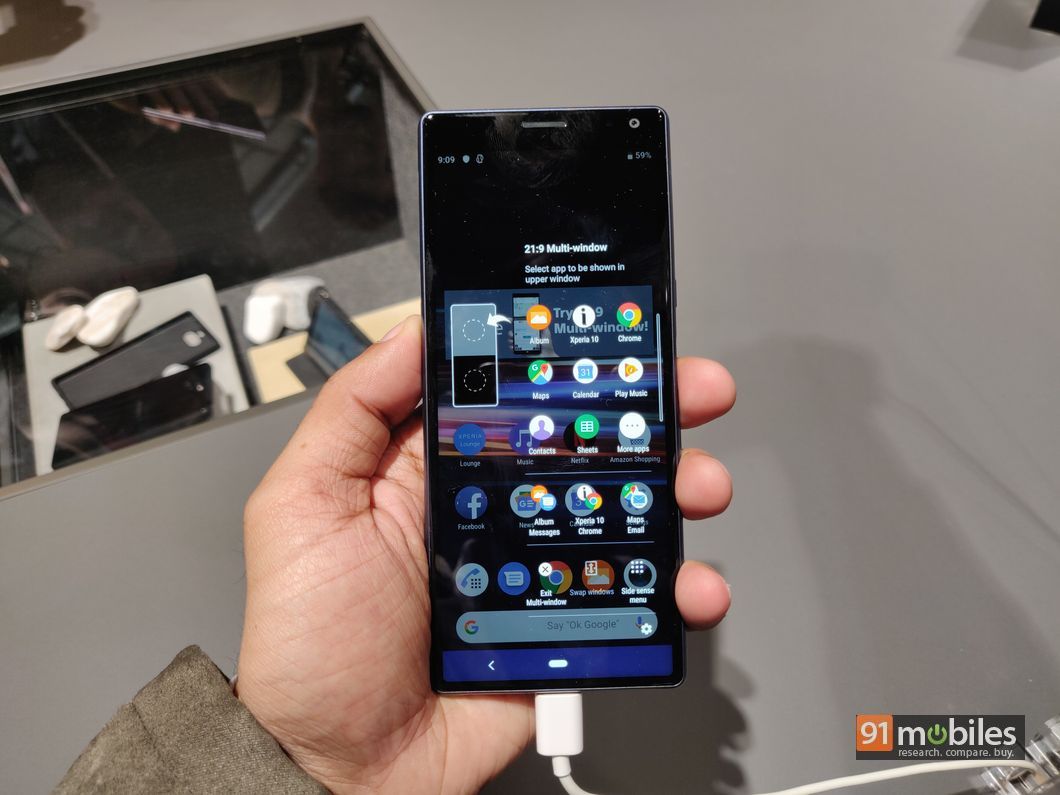 For ports and buttons, both the smartphones feature the power button, the volume rocker as well as the fingerprint sensor on the right-hand spine. In my opinion, Sony should’ve positioned the volume rocker on the left, as the current setup feels a bit cramped. I couldn’t test the accuracy of the fingerprint sensor during my brief stint with the devices on the show floor, so stay tuned for more information on the same. 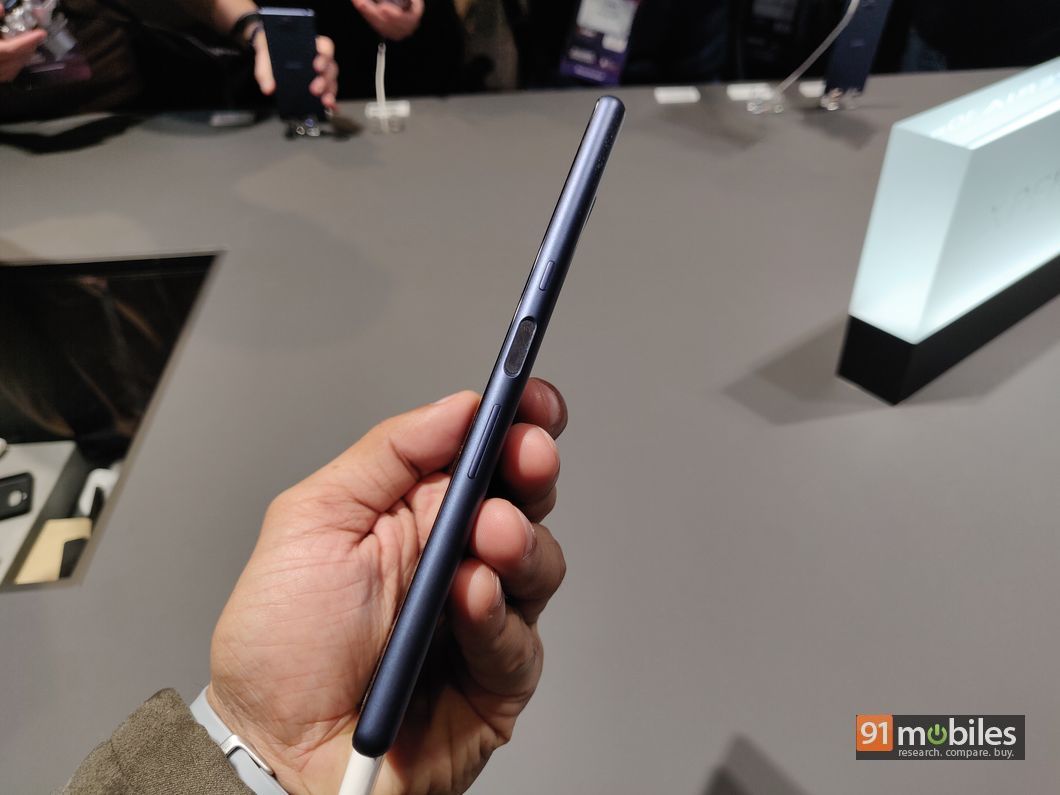 The USP of both, the Xperia 10 as well as the Xperia 10 Plus, is the presence of a 21:9 aspect ratio display, which can output wider, more immersive videos via compatible apps like Netflix. In fact, as per the company, most creators prefer to shoot videos in the wider aspect ratio and hence, the reason to bring the technology to the mainstream. While the Xperia 10 ships with a 6-inch IPS panel, the 10 Plus sports a bigger 6.5-inch display. That said, both the panels are capped at FHD+ resolution and ship with a layer of Corning’s Gorilla Glass v5 on top. The quality of the panels felt excellent and the displays on both the smartphones exhibited dark blacks, punchy colours and get sufficiently bright. 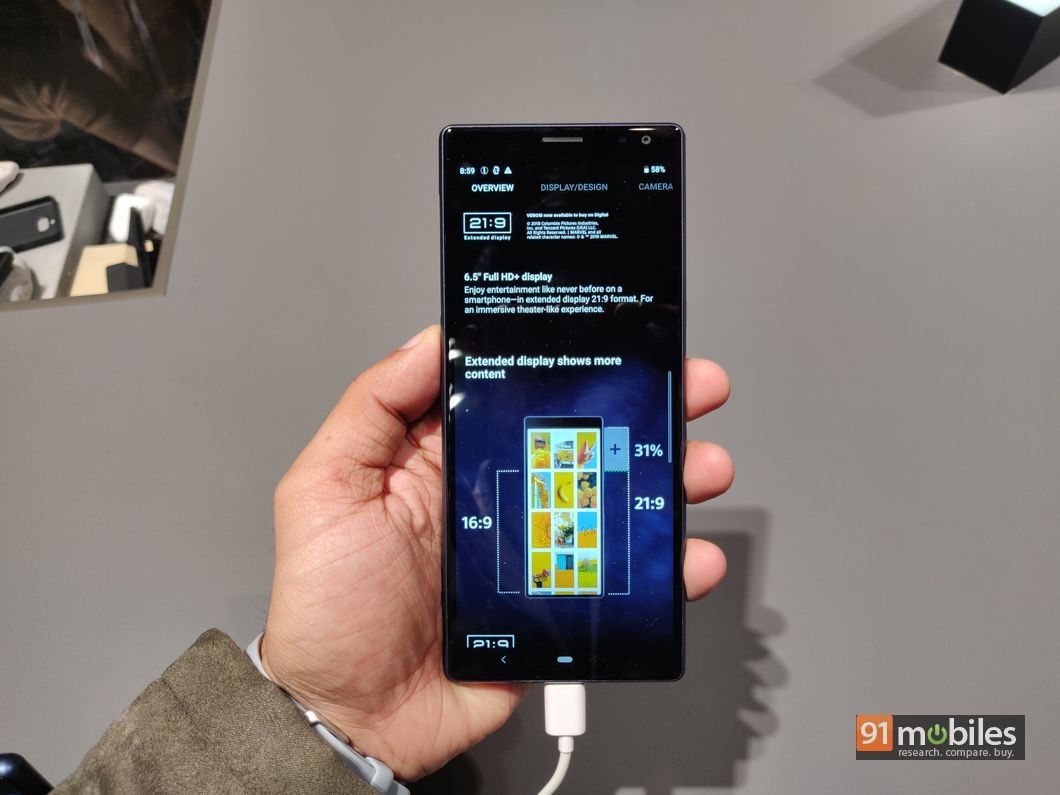 Driving the smarts on the Sony Xperia 10 is a Qualcomm Snapdragon 630 processor which is paired with either 3GB or 4GB of RAM, depending upon the variant. On the other hand, the Xperia 10 Plus comes with a Snapdragon 636 processor which works alongside either 4GB or 6GB of memory. Both the devices feature 64GB of built-in storage with support for expansion up to 512GB by means of a microSD card. Despite not featuring the latest mid-range CPUs, the smartphones performed admirably during my short stint with them. Apps opened swiftly and there was nary any lag or stutter in UI transitions. However, from a longevity standpoint, I would’ve preferred if the smartphones were powered by a Qualcomm Snapdragon 712 or an SD 675 chip. 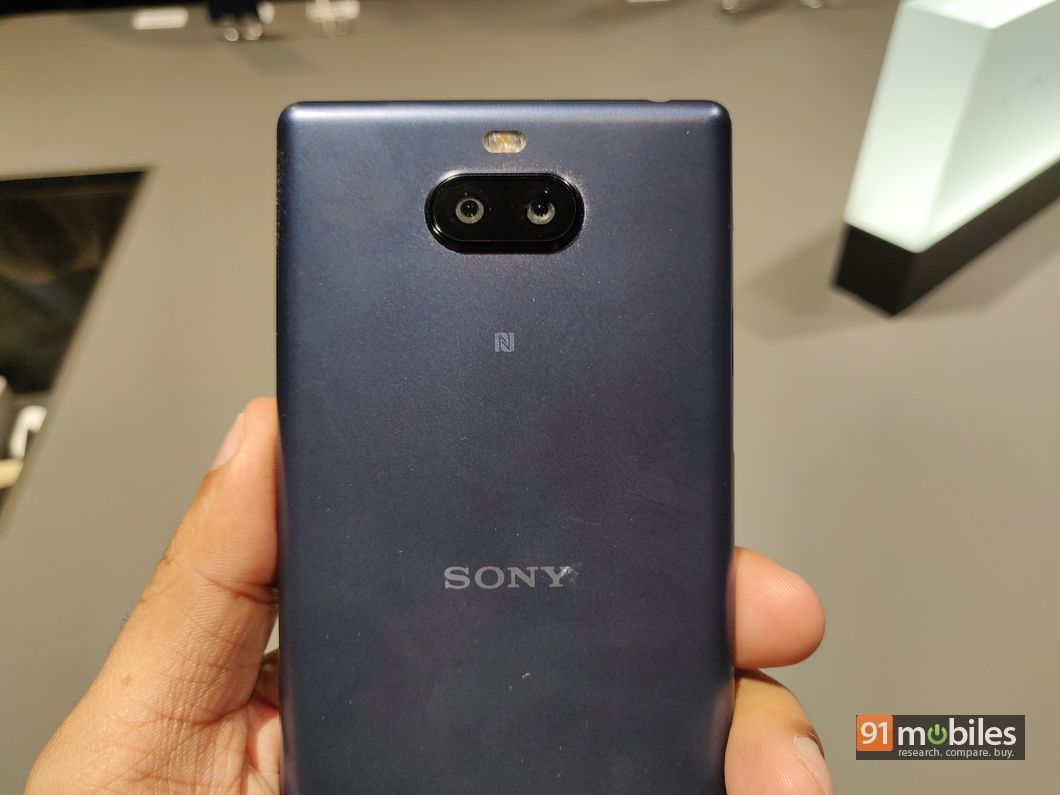 For optics, both the smartphones feature dual-camera setups on the back, albeit with varying specs. The Xperia 10 Plus is equipped with12MP and 8MP shooters on the back, with f/1.75 and f/2.4 aperture respectively. The Xperia 10 features a 13MP main shooter and a 5MP assisting shooter with f/2.0 and f/2.4 aperture respectively. For selfies, both the smartphones come with identical 8MP front cameras with f/2.0 aperture. 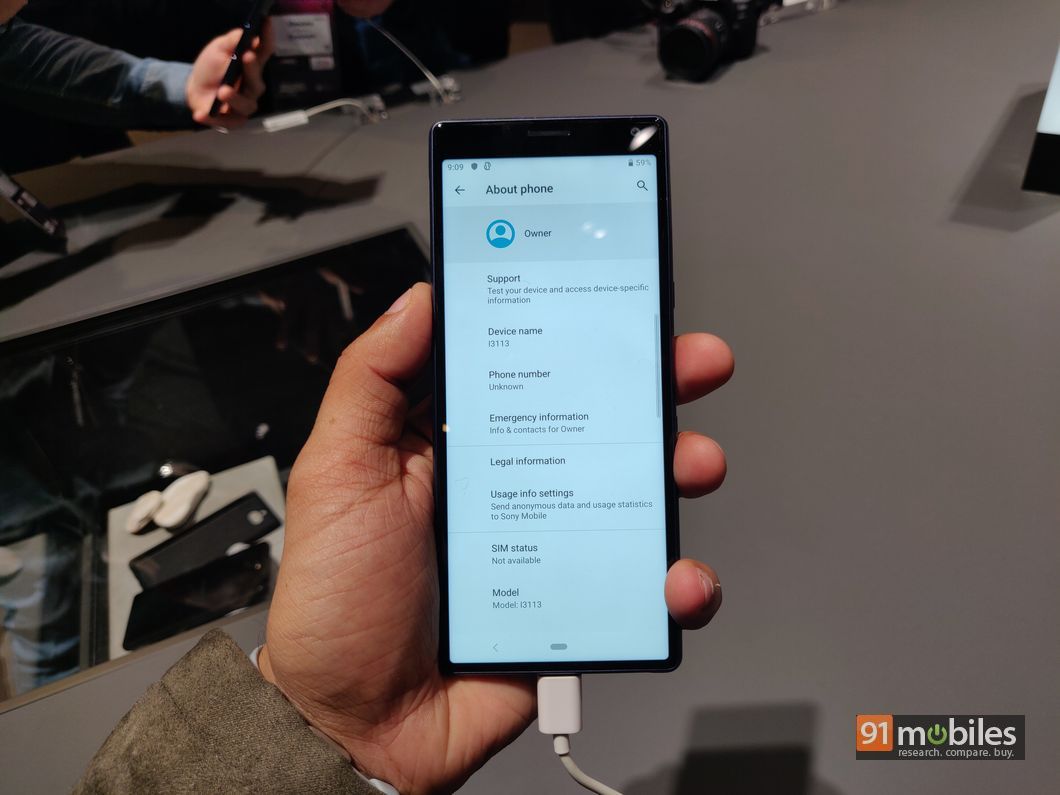 In the software department, the company’s latest offerings boot Android Pie out of the box. The handsets come with support for Bluetooth v5.0, as well as a ton of audio codecs including the company’s LDAC, aptX HD and DSEE HX. The battery size on the Xperia 10 is capped at 2,870mAh, whereas the 10 Plus offers a slightly bigger 3,000mAh cell. As per industry sources, the pricing for the Xperia 10 starts at $345, whereas the Xperia 10 Plus will set you back by $430. For more news and information, stay tuned to our blog.