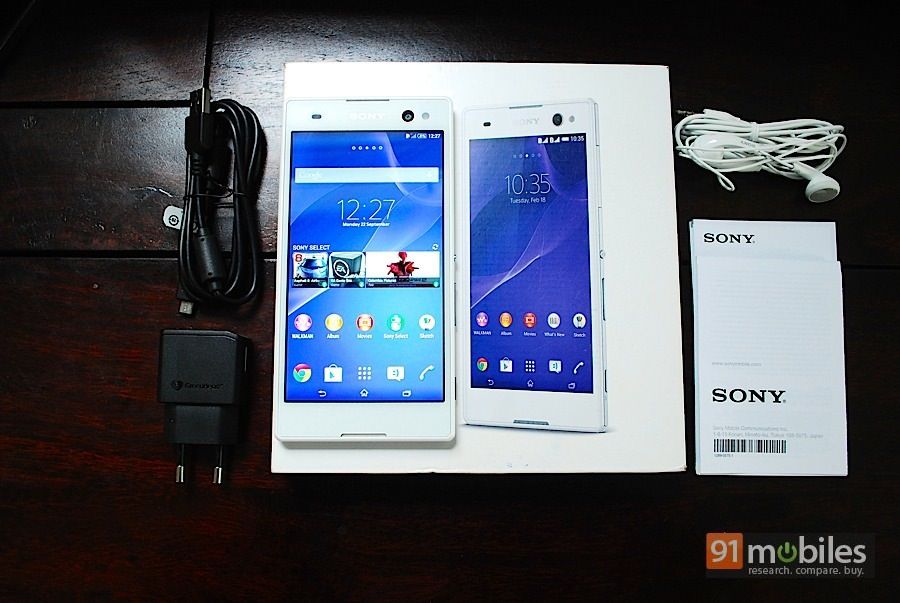 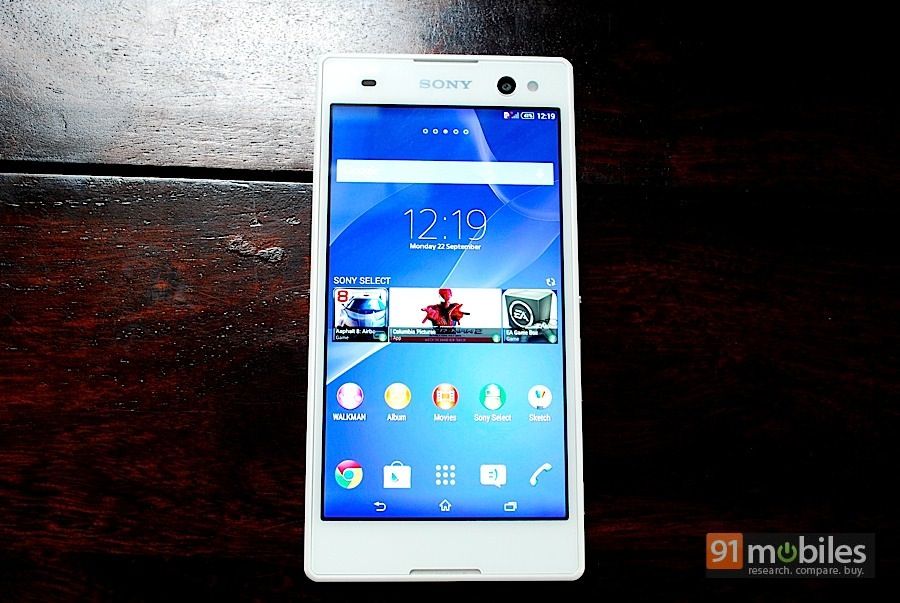 The Sony Xperia C3 Dual, which was launched in India recently, is the brand’s first “PROSelfie” smartphone. Targeted specifically at users who suffer from a strong case of selfie addiction, the Xperia C3 features a 5-megapixel wide-angle camera and a soft LED flash in the front, that promise to make your mug shots look flaunt worthy. We’ve got the device in our labs, but before we begin what will undoubtedly be our most narcissistic review yet, we’re going to start with an unboxing.

The Xperia C3 comes in the standard square Sony packaging. The flat box opens up from the back, revealing the smartphone tucked inside a cardboard cradle. Removing it exposes the user guide and documentation underneath. There are two narrow pockets on the left and right, which hold the 2-pin wall charger, USB cable and a pair of white headphones.

Now that we’ve taken a look at the box contents, let’s take a closer look at the smartphone itself. In terms of looks, the Xperia C3 looks quintessentially Sony, featuring the company’s OmniBalance design theme, with its unibody rectangular frame and rounded edges. The smartphone is made out of plastic, which is probably why it’s so light, tipping the scales at 150g. 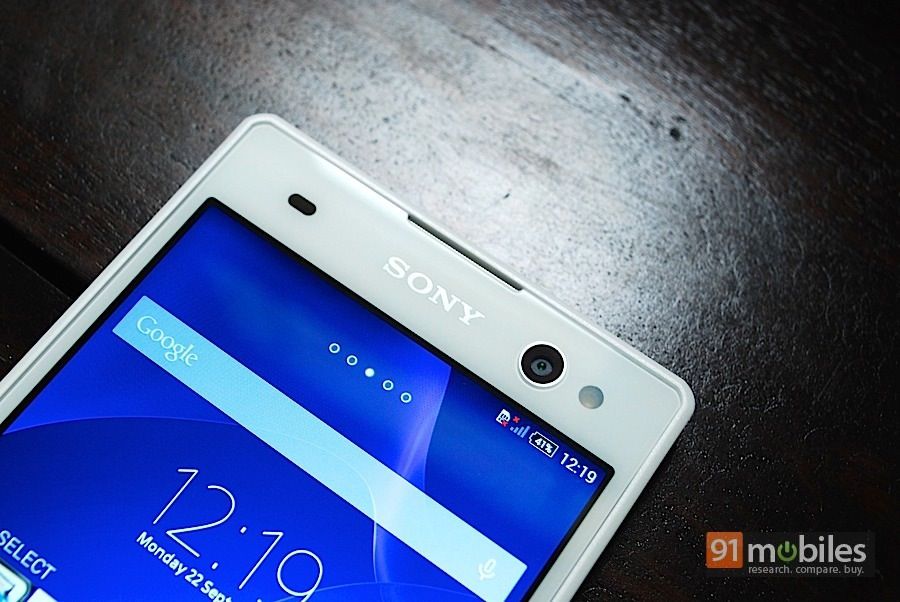 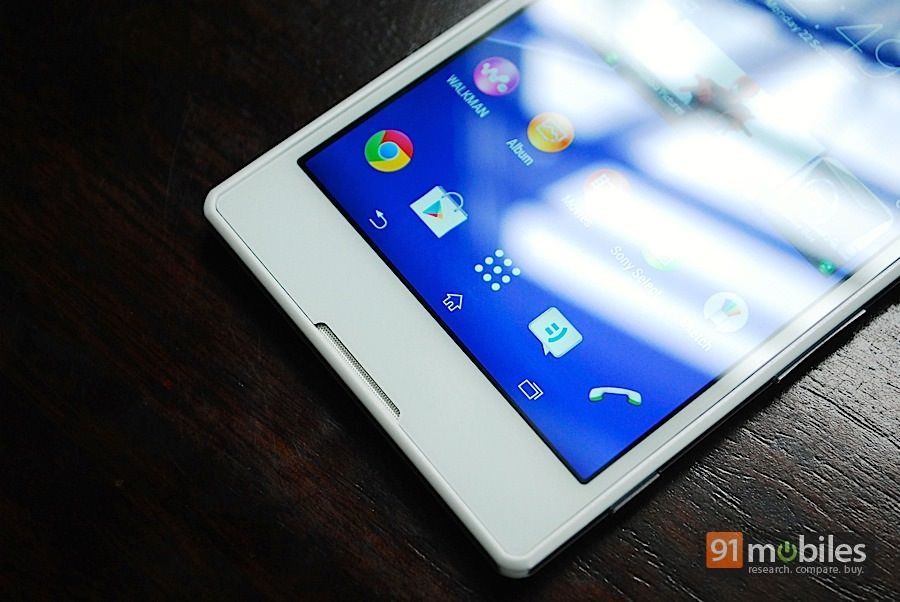 The bezels above and below the display are fairly wide, with the one on top holding the earpiece, notification LED and sensors. The front camera is quite prominent, thanks to it’s large round lens with chrome detailing. The soft LED flash is placed next to it. The fascia features the primary microphone at bottom centre, but is devoid of any Android hardware buttons, as these are available as software overlays on the display. 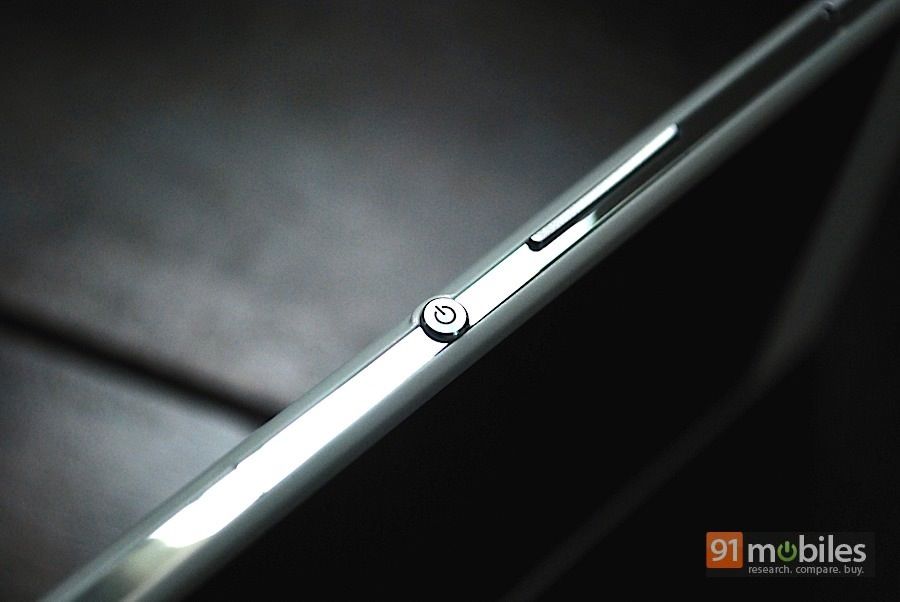 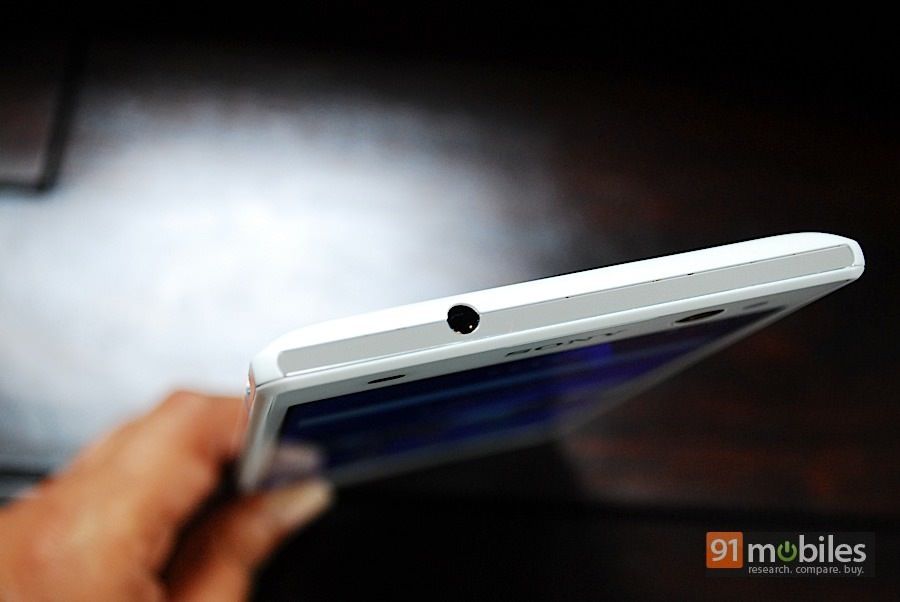 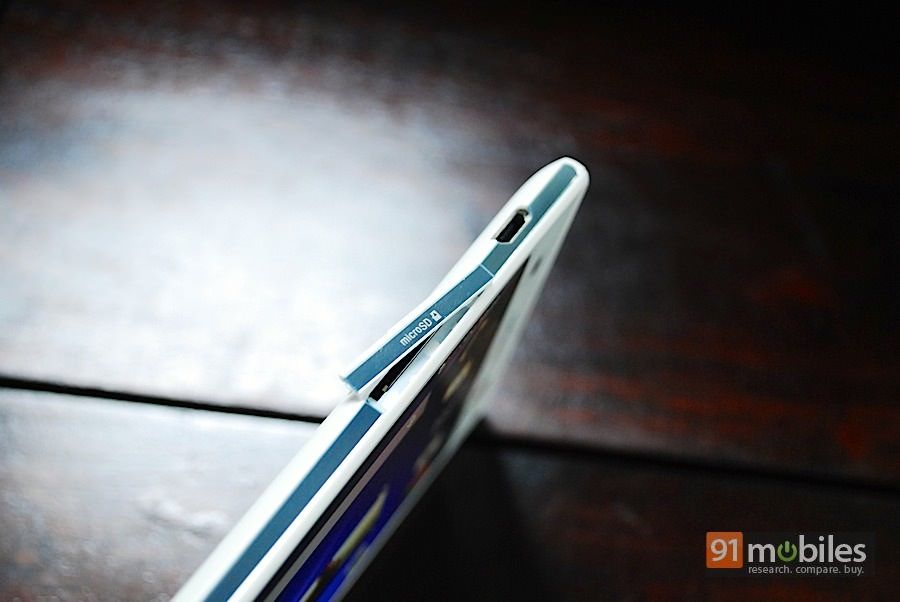 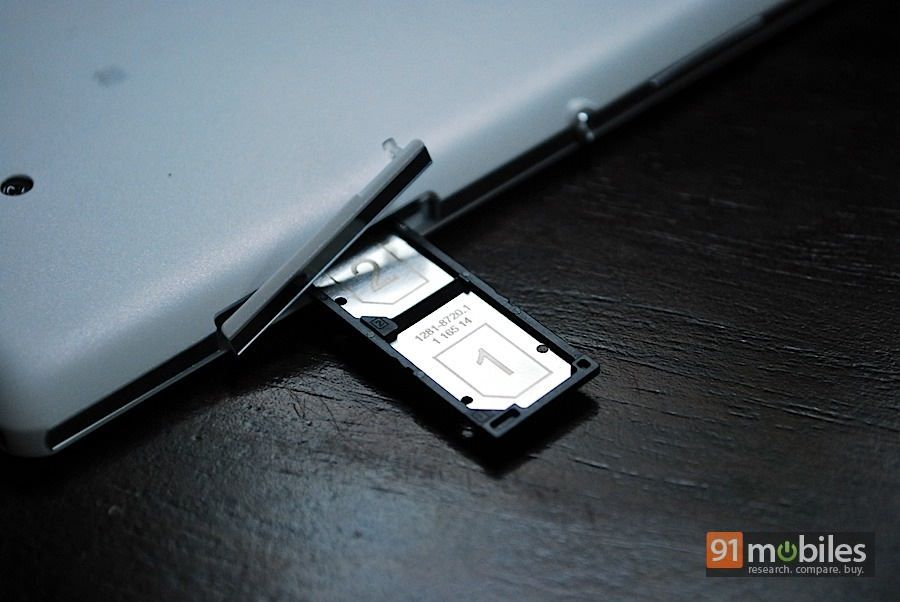 The edges of the smartphone are inlaid with chrome strips, but these are made of plastic and pick up smudges easily. The chrome detailing does make the Xperia C3 look very slim though, seemingly shaving a few millimeters off its already thin 7.6mm frame. The right spine is home to most of the ports and buttons. In the centre, you’ll find the watch-crown inspired signature Sony power button, with the volume rocker and a dedicated camera button just below. Towards the top, there’s a flap that can be pried open to reveal a double micro-SIM card tray. The left spine has a similar flap for the microSD card slot. Right above it, you’ll find the micro-USB port. The 3.5mm audio jack is located on the top edge, while the bottom is bare. 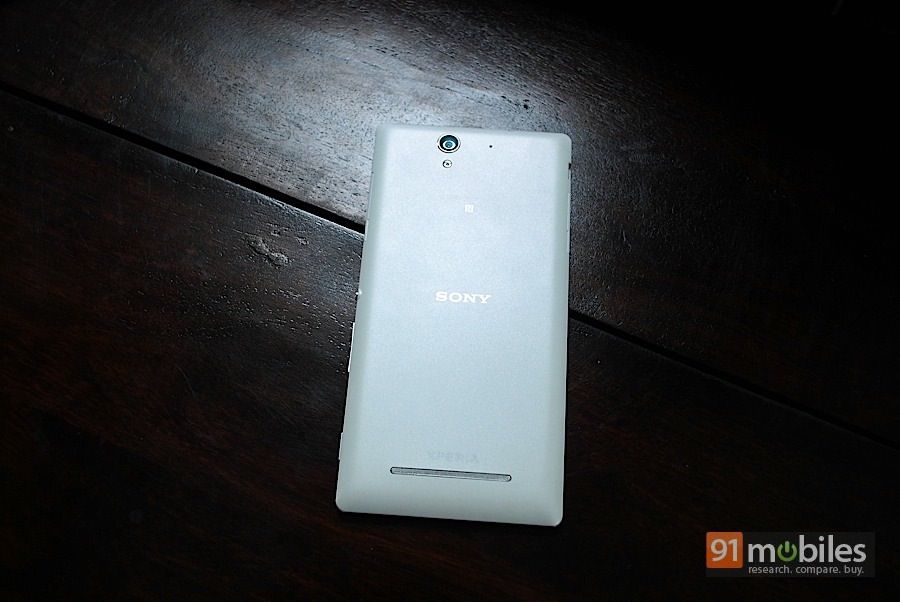 The back panel is made of a matte-finish plastic that does a good job of hiding fingerprint marks. The 8MP primary camera and flash are on top, flanked by the secondary microphone on the right. A single loudspeaker encased behind a long metallic grille is at the bottom. 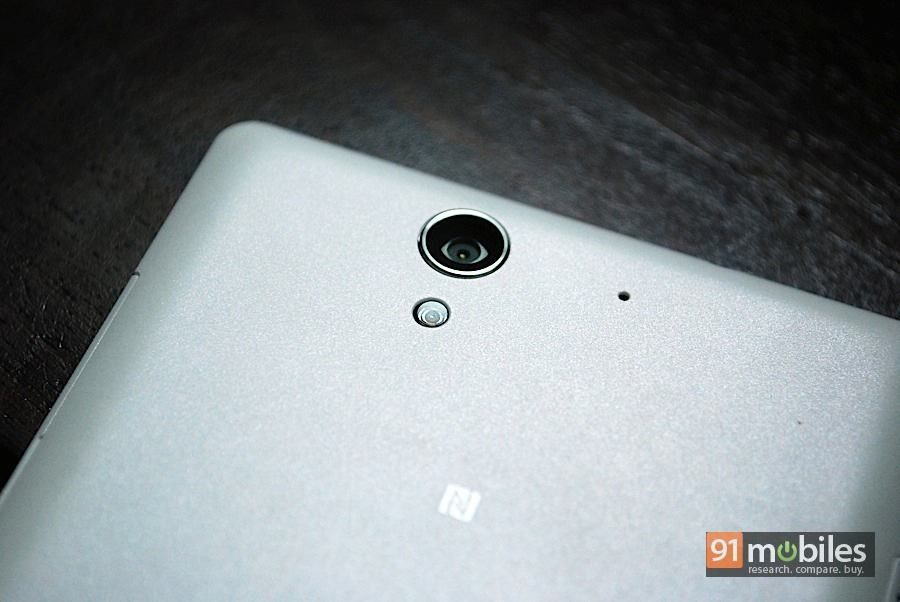 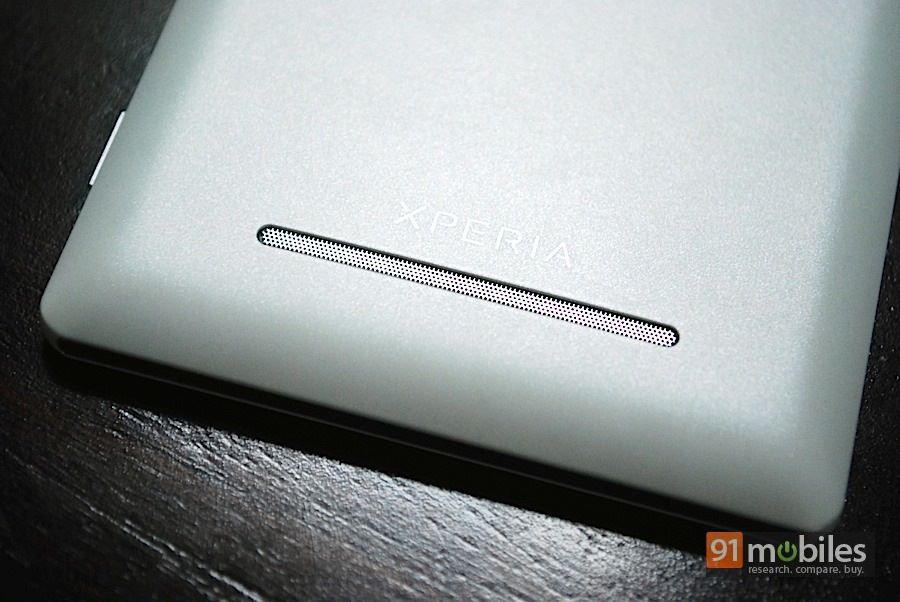 The Xperia C3 features a large 5.5-inch display, which puts it square in the middle of phablet territory. The display bears HD resolution, and even though the 267ppi pixel density is on the lower side, the screen appears sharp and vibrant.

Powering the show is a quad-core Snapdragon 400 processor clocked at 1.2GHz, aided by 1GB of RAM and an Adreno 305 GPU. During the short time we’ve spent with the device so far, it seems smooth and zippy, but we’ll reserve our final comments on performance for the full review.

There’s 8GB of internal storage, out of which a little under 5GB is user available. The device is fuelled by a non-removable 2,500mAh battery, and features Sony’s STAMINA mode to extend battery life. Connectivity options include 3G (on both SIMs), Wi-Fi, Wi-Fi Direct, DLNA, Bluetooth 4.0, NFC and GPS. 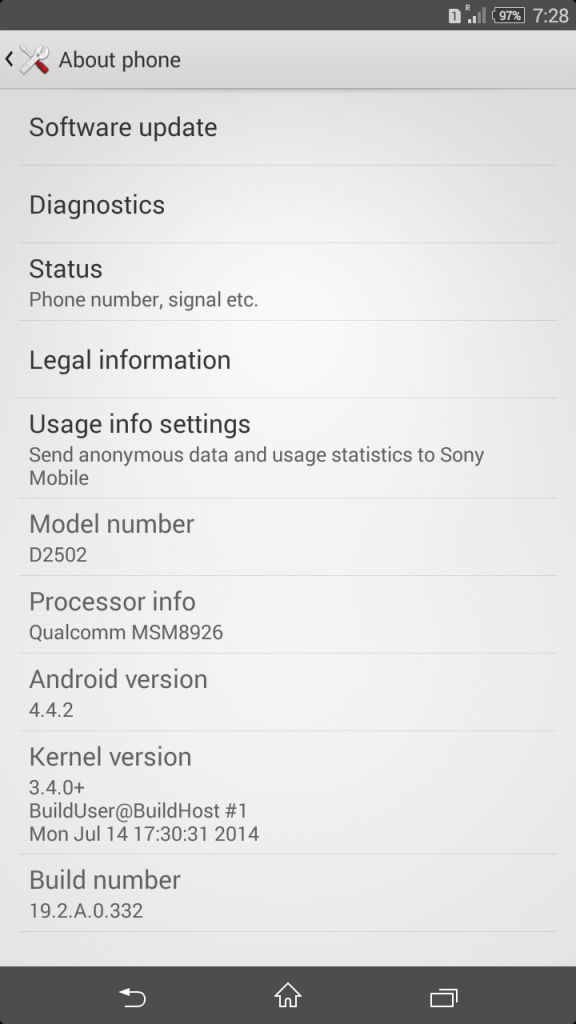 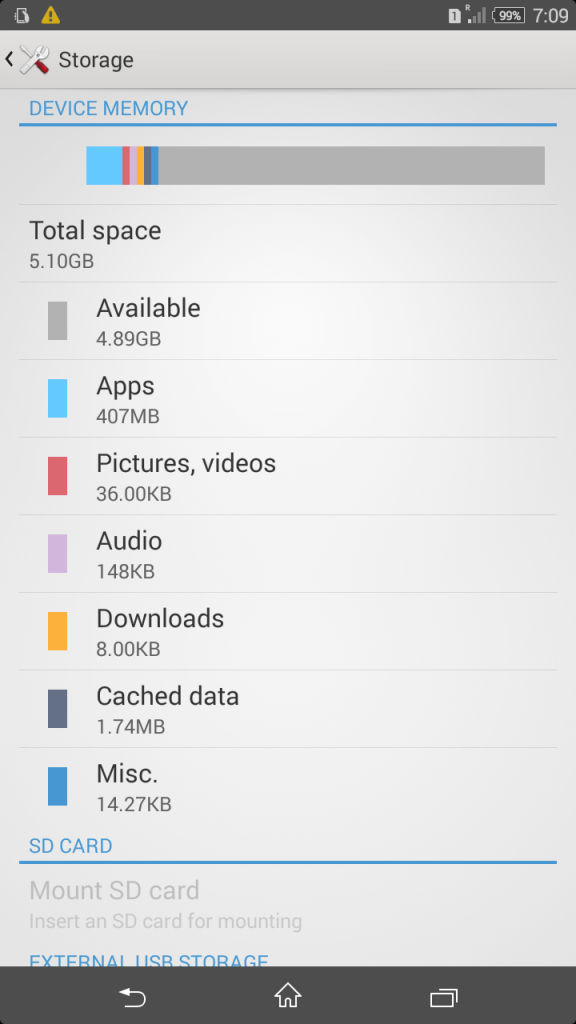 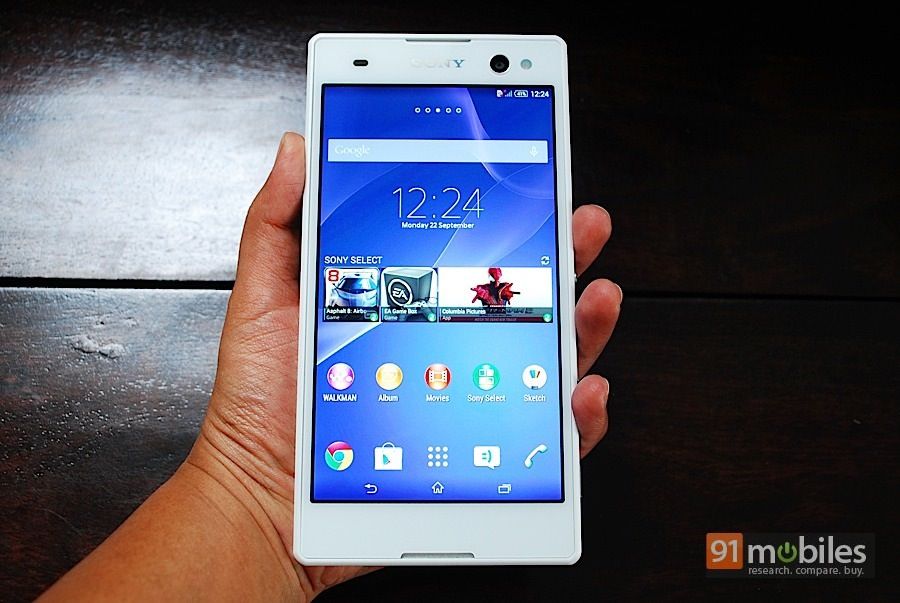 Our first impressions of the Xperia C3 have been satisfactory so far, but the price tag of Rs 23,990 may deter even the most determined selfie takers, given that there are plenty of compelling options like the HTC Desire 816, Asus Zenfone 6 and Lenovo Vibe X which offer similar features (minus the front facing flash) at a lower price. We’ll be putting the device’s cameras and performance to the test over the next week, so stay tuned for the final verdict.