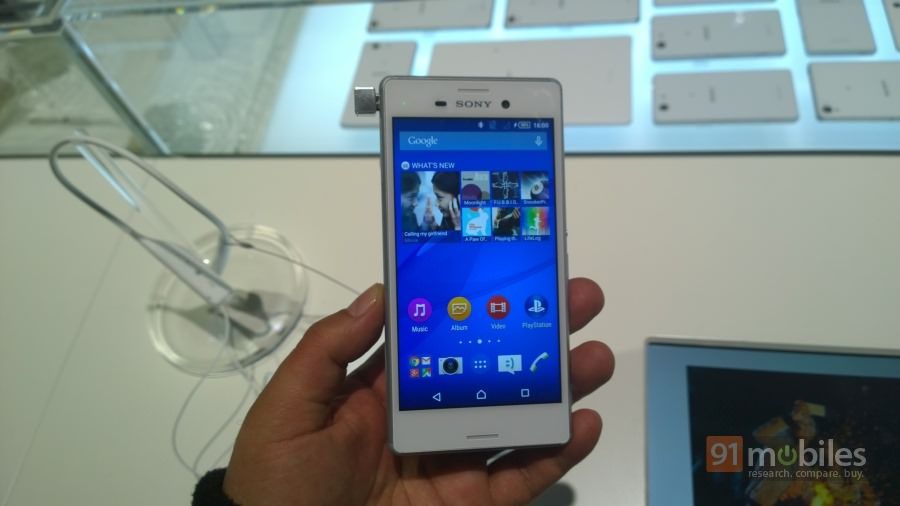 Sony’s been following a six-monthly schedule for unveiling flagship smartphones since some time, using the annual MWC and IFA shows each year as launch platforms. This year however, the Mobile World Congress came and went without a new flagship from the Japanese brand seeing light of day. While CEO Kazuo Hirai’s statement about the brand looking to exit the smartphone market may or may not have something to do with it, Sony did have a couple of interesting new smartphones at MWC. The Xperia E4g (first impressions) brings LTE on a budget, while the Xperia M4 Aqua is a new mid-ranger that you can take into the shower with you. To give credit where it’s due, we’d have to say that Sony’s been the only brand churning out mainstream waterproof phones on a regular basis, both in the upper and the mid-range segments, and therefore, deserves kudos for bringing this useful feature to the masses. And do we really need to tell you why it’s important? Ask one of our colleagues who played holi with his phablet in his pocket. Protection from beer liquid spills and rain are obvious, but a waterproof phone also gives you the freedom to cavort around the pool or on the beach freely, without worrying about damage. And with the Xperia M4 Aqua, Sony has yet another waterproof smartphone for you… and we’re hoping the brand would be pricing it sensibly to make sure it’s affordable for most. 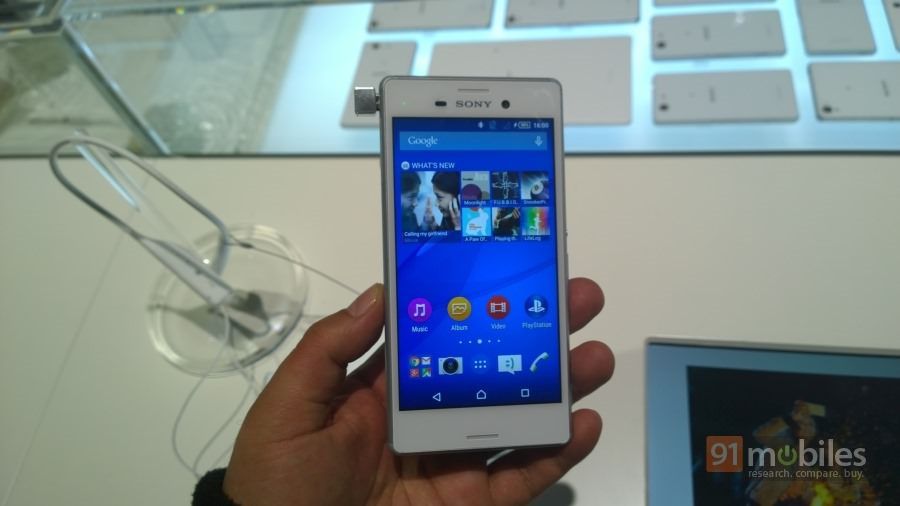 Let’s take a closer look at the new device and check out what it brings to the shower table.

The M4 Aqua looks like a typical Xperia with its OmniBalance design… but instead of the blocky slabs of yore, now features curvy spines and rounded corners… just like the Xperia Z3 (review). Let’s face it – you’re not going to turn any heads with the M4 Aqua, but the build quality is solid. The metallic frame on the sides does add a bit of flair to the looks, and as you can make out… the demo unit we tried came in white. The device also comes in black and coral. Just like the Xperia Z3, the M4 Aqua also comes with shock-proof rubber bumpers on the corners, so Sony sure is serious about the build quality. 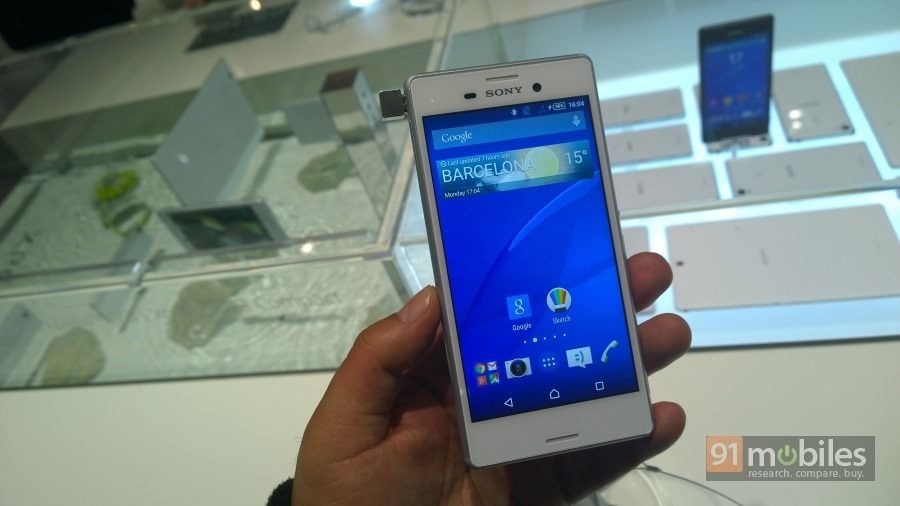 The front is dominated by the 5-inch 720p screen, with wide bezels on the top and bottom. The device features front-facing stereo speakers, and you’ll find them placed symmetrically opposite each other on the bottom and top of the screen. Next to the top speaker which also includes the earpiece, you’ll also find the sensors and a 5-megapixel camera. The latter features a 22mm wide-angle lens with an 88-degree field of view, and also offers a Superior Auto mode (hitherto a feature of only the rear camera) that optimises setting based on shooting conditions. 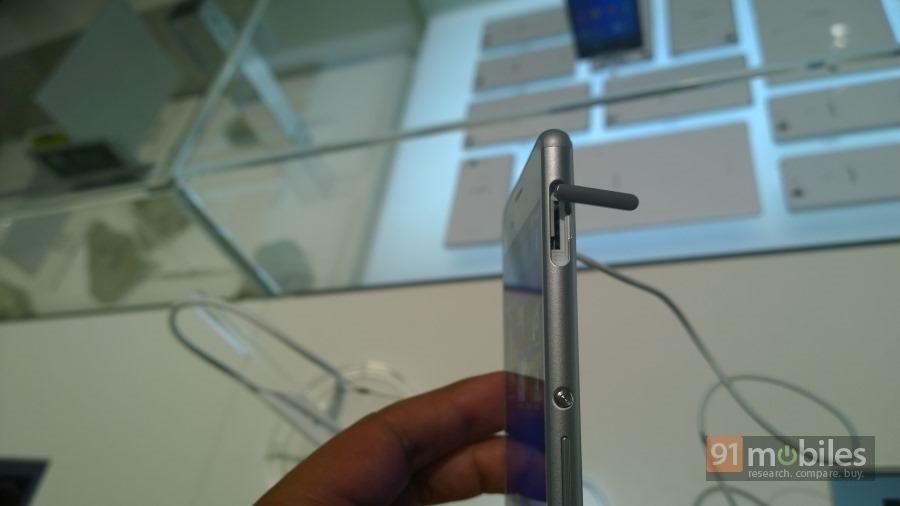 On the left is a micro-USB port and a tab-covered microSD card slot, while the SIM slot is on the right… again covered by a plastic tab. The right also holds the standard Sony power key – a circular button finished in metal. A volume rocker and a dedicated shutter key for the camera is also placed here. The latter is quite noteworthy, since it’d allow you to shoot underwater too – touchscreens are basically useless when they’re wet you see. The 3.5mm audio socket is on top, as usual. 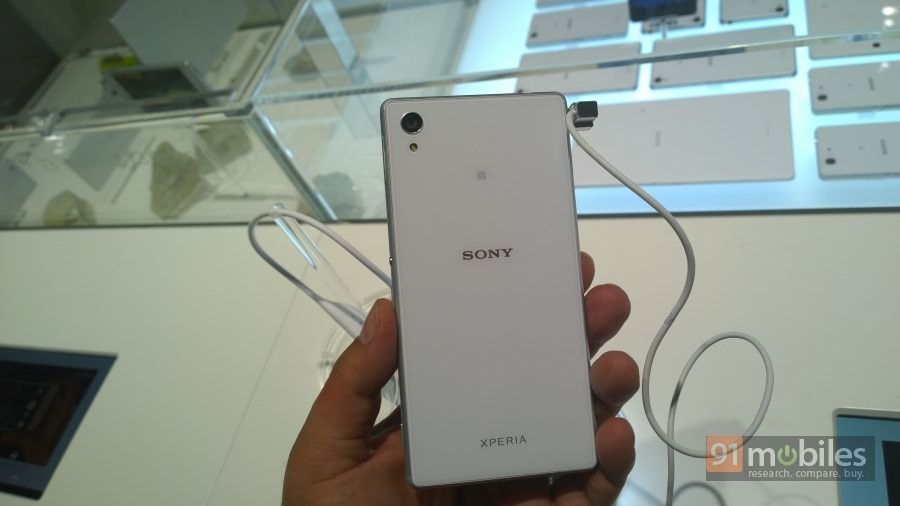 The rear is clad in polycarbonate, but it almost feels like glass. You’ll see the primary camera lens, along with the flash, a tiny NFC logo indicating the exact spot where the device needs to be tapped for using this functionality, along with Sony and Xperia branding. The rear shooter offers a resolution of 13-megapixels, and features an Exmor RS sensor, along with HDR for both photos and videos. 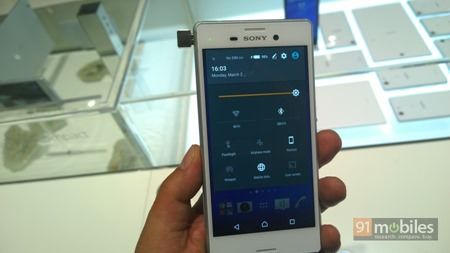 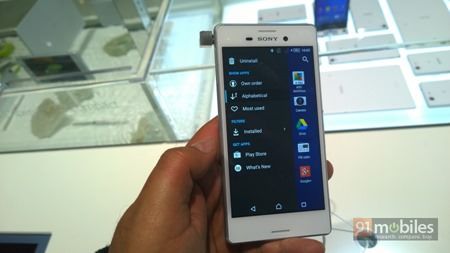 The M4 Aqua runs Sony’s custom skin we’ve seen earlier, but with one significant difference – the base this time is Android Lollipop. As usual, Sony’s customisations are quite subtle, so much so that the drop-down quick settings panel looks very similar to stock Android. There’s the usual sidebar that lets you sort and manage installed apps, along with a bunch of apps from Sony.

With a 64-bit octa-core Snapdragon 615 (including a quad-core 1.5 GHz Cortex-A53 cluster and a quad-core 1.0 GHz cluster) ticking under the hood, along with 2 gigs of RAM, basic operation seemed quite speedy in our brief usage of the device. There’s 8GB of expandable storage (some variants offer 16GB), and tons of connectivity options including 4G, DLNA, NFC, Miracast, and ANT+, along with the usual Wi-Fi, Bluetooth and A-GPS. Sony’s promising up to two days of usage on a single charge with the 2,400mAh battery sealed inside the device, and you’ll find a few battery-saving modes such as an Extended Standby Mode and an Ultra STAMINA Mode too. 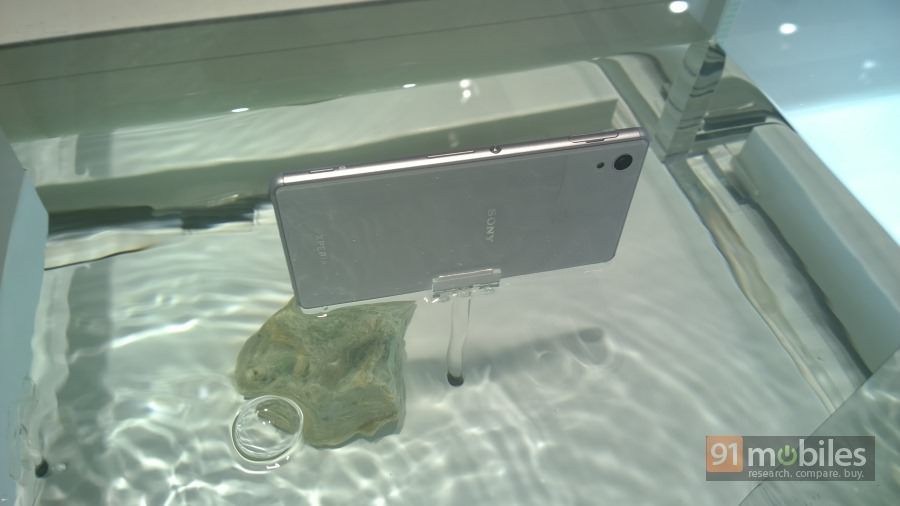 Imperviousness to water and dust is the mainstay of the device of course, and the Xperia M4 Aqua actually boasts IP65/668 rating. Basically, this means you can submerge the phone in up to 1.5m of fresh water for a period of up to 30 minutes, without risk of damage. Goa, here we come (as soon as Sony launches it in India and sends one our way for a review, of course).