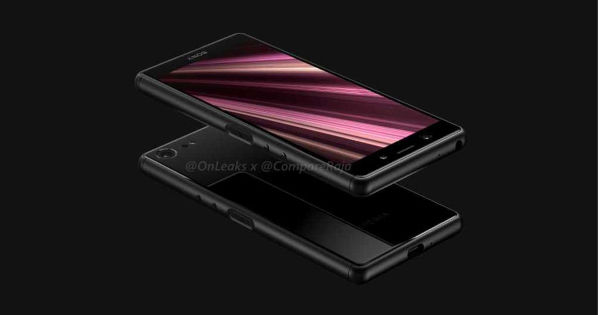 Sony’s upcoming flagship Xperia XZ4 was recently spotted CAD-based renders and a 360-degree video, sporting triple cameras and a premium glass-sandwich design. Now, 3D renders and 360-degree videos of Xperia XZ4 Compact have been spotted on the Internet. The new leaks comes from the collaboration of Compareraja and @OnLeaks, giving us the first look of the upcoming phone.

The leaked images of the smartphone reveal the signature blocky glass slab design of the brand. The Xperia XZ4 Compact is seen featuring a single camera on the rear panel and one on the front, both accompanied by LED flash. The Xperia branding can be seen at the rear as well as the chin of the device. It is surprising to see that in an era of 18:9 display even in budget segment, Sony seems to be sticking to 16:9 ratio as the XZ4 Compact can seen sporting huge bezels on top and bottom. Other details revealed by images include 3.5mm audio jack, dual front firing speakers and side-mounted power button with fingerprint scanner embedded in it.

Unfortunately, not much is known about the specifications of the Xperia XZ4 Compact. However, the report states that the smartphone will come with a 5-inch display with an unknown resolution. The renders also reveal that the upcoming smartphone will measure  139.9 x 66.5 x 9.3 mm roughly. For other information, we will have to wait for the brand to announce them.

Unfortunately, there is not a hint of details regarding the launch timeline and price. We will bring you more updates soon as they turn up, so stay tuned.