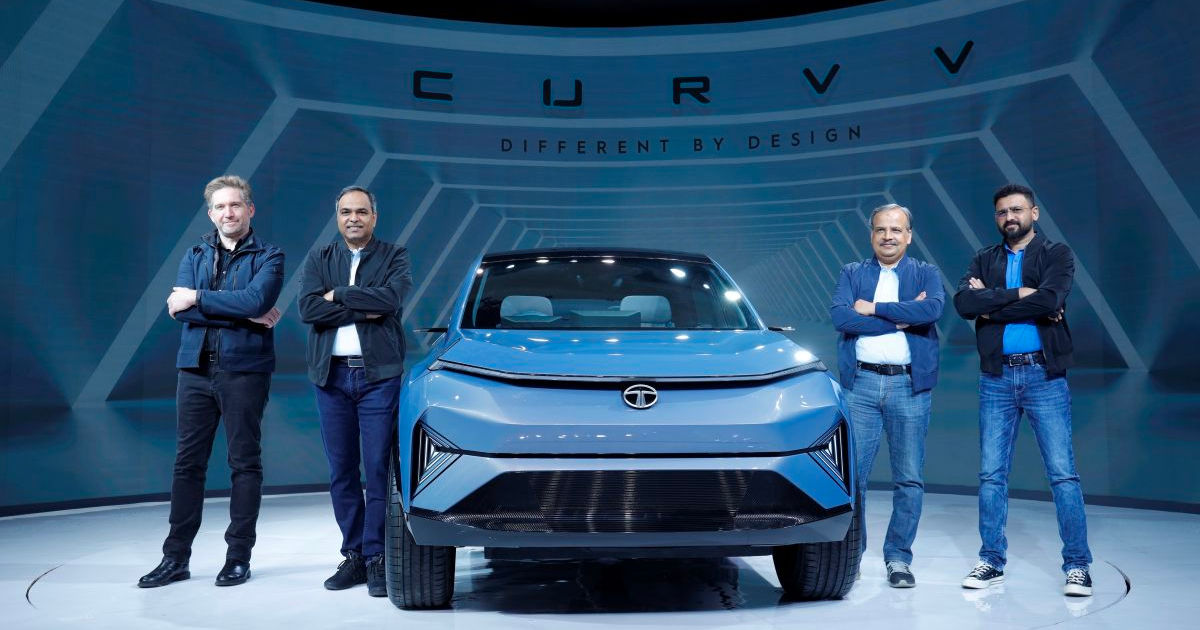 Tata Motors unveiled its 2022 Tata Curvv concept electric car as a mid-size offering that is set to launch in a couple of years. The Tata Curvv, as we wrote earlier, will sit above the Tata Nexon SUV. The commercial model will go on sale in India by 2024. The name of the upcoming Hyundai Kona and MG ZS EV rival model from Tata has not yet been finalised. The new Tata Curvv EV will adopt Tata’s next-generation Digital Design language and will be based on Generation 2 EV architecture. ICE versions of the same are also expected to follow.

A New Electric SUV Concept that is #DifferentByDesign. The 2022 Tata Curvv EV showcases Tata Motor’s new Digital Desing language and can be expected to be adopted by other SUVs in the company’s lineup. The front as seen in the teaser looks sharp and bold despite being minimalistic. An LED lightbar that mimics Tata’s earlier Humanity Line ends in two vertical looking slats that cohesively connect the bonnet and lower half near the front fenders. The triangular main headlamp assembly crowns the bumper on the edges and hosts the large angular air dam up front.

The side profile as expected gets a sloping roofline that suggests its coupe-like design theme. The squared-off wheel arches impart the butch characteristics of the SUV. The side profile is garnished by the sporty-looking alloys as well as a generous amount of gloss black cladding that accentuate the car’s rugged genes.

At the rear, the light bar runs across the width of the car and joins the vertical and angular main tail lamp cluster. The steeply raked rear glass is outlined by what would end up being the third brake light. The bumpers at the rear are flanked by triangular air vents mimicking the front fascia.

The interiors of the Tata Curvv sport a minimalistic design but brings in flavour in the form of a layered design, an LED strip (possibly ambiently lighting), a fabric material for soft-touch surfaces, and a tech-rich dual-screen layout. There’s a new two-spoke steering wheel design and a floating centre console design that is disconnected from the main console. The centre extension also gets a rotary gear selector. New ages tech goodies such as a panoramic sunroof will also be part of the package.

The Tata Curvv EV has been conceived with the underpinning of the Generation 2 EV architecture from Tata Motors. This platform will spawn various other models in the future as well and will facilitate various body styles. Much like the Tata Nexon EV which is a heavily modified version of the Gen 1 platform, the Gen 2 platform will also be capable of housing larger battery packs as well as other powertrain options. Interestingly, the new Gen 2 platform on which the Tata Curvv will be based, is capable of handling a dual-motor setup and thus allow an all-wheel-drive setup.