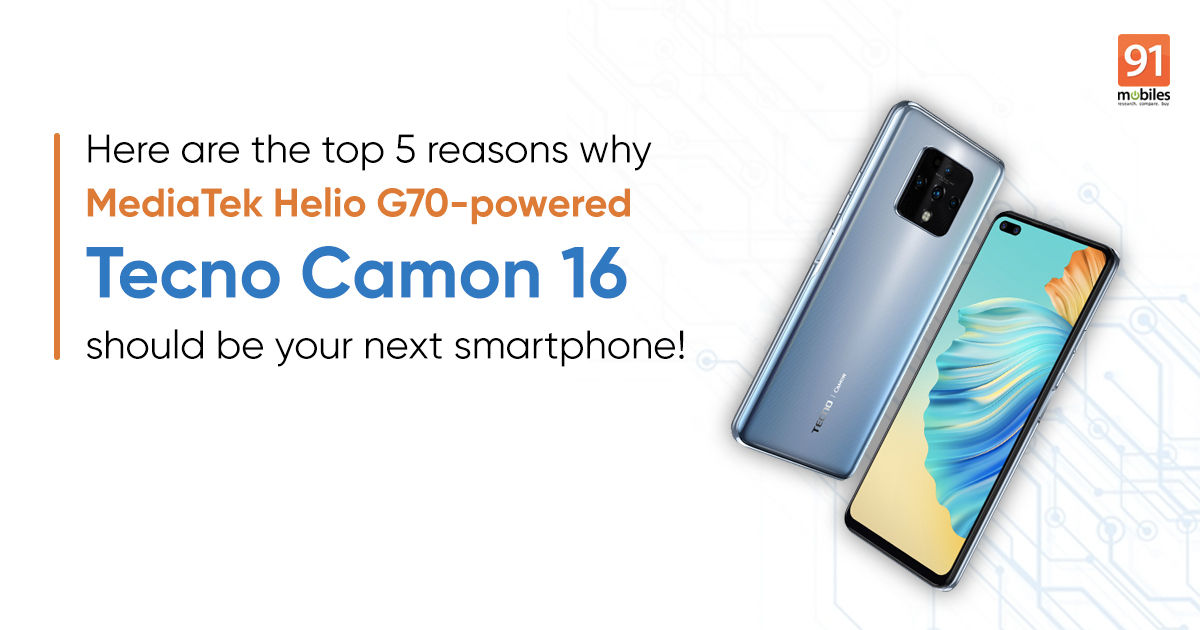 The Tecno Camon 16 is an affordable smartphone that rises above and beyond its price tag, offering a fair share of interesting features. That’s not only because it offers the power of the MediaTek Helio G70 chipset, but also due to the other advanced features it has been equipped with. Priced at just Rs 10,999, it impresses in most departments and looks attractive as well, all thanks to the thoughtful design that has gone into its build. One of the most striking aspects of this phone is its front surface that’s almost entirely covered by the screen. The phone’s rear sports a metallic finish and holds a quad camera setup inside a square-shaped module, giving it a stylish look. In fact, this device is one of the most affordable smartphones in India that offer a 64MP quad camera setup. If you’re interested in knowing more about the smartphone, you’ve come to the right place. Here are five reasons why you should buy the MediaTek Helio G70-powered Tecno Camon 16.

For offering a superior photography experience than its peers, the Tecno Camon 16 holds a 64MP quad camera setup on its rear surface. This capable camera system comes packed with a considerable number of additional perks as well. The main 64MP snapper features a wide lens, while there are 2MP depth and macro cameras present on the unit as well. The fourth shooter is an AI camera that enables several camera traits like Ultra Night Portrait, AI Beautification and more.

But of course, none of that would be possible without the aid of the MediaTek Helio G70 chipset, which has been built with the aim of offering advanced multi-camera photography with the help of its secure ISP. That’s not all, this SoC also comes with a dedicated depth engine for delivering enhanced depth calculations for your portrait shots. It’s home to a Rolling Shutter Compensation (RSC) technology as well, that enhances video panning and supports ultra-fast slow-motion capture. It’s no surprise then that the Tecno Camon 16 offers 120fps slow-motion videos through its rear camera.

And while capturing selfies, a special Eye Focus technology tracks your eyes to ensure that the focus stays on you. Selfies are taken care of by a 16MP front camera that along with the high resolution, also offers FHD video support. This is one more feature made possible by the top-notch MediaTek Helio G70 chipset, which provides ample support for camera hardware.

A host of distinct AI features will make you want to buy the Tecno Camon 16. And all of those are made possible by the MediaTek NeuroPilot support onboard the MediaTek Helios G70 chipset. This artificial intelligence ecosystem is in full compliance with Android Neural Networks API (Android NNAPI), which means manufacturers can ensure ultra-quick performance and great power efficiency while enabling AI features in their phones.

On the Tecno Camon 16, these features are highlighted by TAIVOS (Tecno AI Vision Optimization Solution), which uses multiple algorithms that have been developed using data from a study of more than 10 million skin tones. TAIVOS makes use of this data to offer better portrait images, improved low-light performance and more. The presence of this technology greatly improves photos and videos captured by both the front and rear cameras of the phone.

TAIVOS is also part of the AI Beautification 4.0 trait of the Tecno Camon 16, which enhances individual facial features and provides a customisable beautification experience. What’s more, the beautification works while capturing videos as well. The AI technologies onboard the MediaTek Helio G70 are also harnessed by the phone’s YUV Super Night Mode that renders stunning shots even under low light by using multi-frame continuous shooting and some AI magic. The Camon 16 features AI Scene Recognition as well. This third-gen technology from the company recognises 16 distinct scenes and tailors the camera’s settings to best capture them. 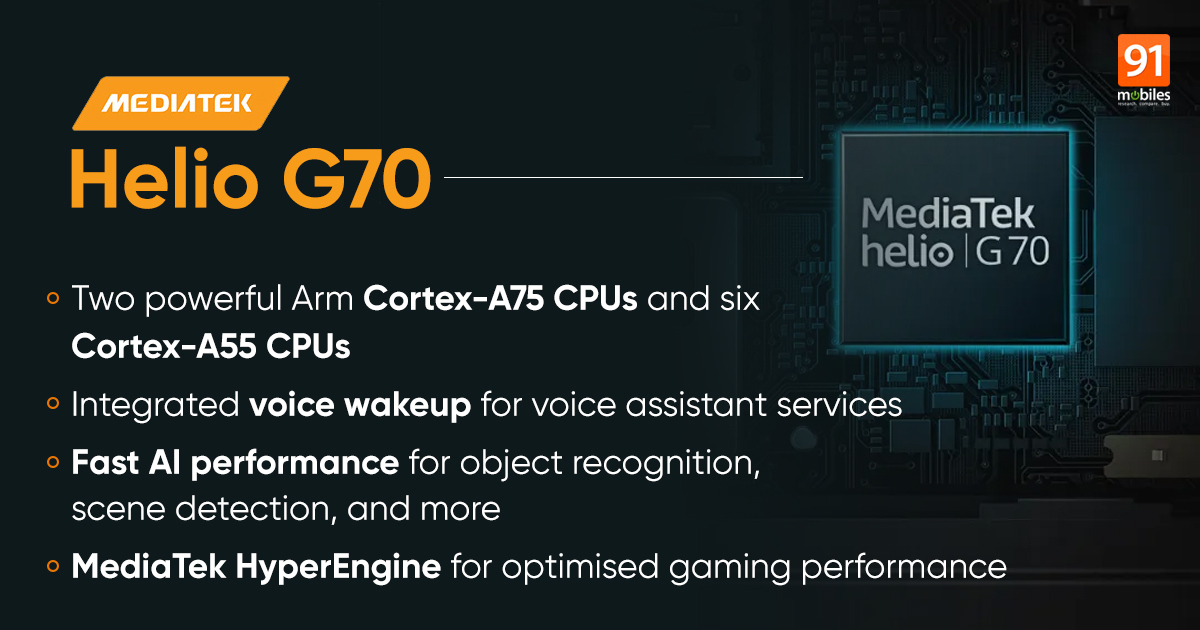 With the MediaTek Helio G70 chipset at its heart, the Tecno Camon 16 is able to provide smooth performance for daily tasks as well as gaming. It does that with the help of a 2GHz octa-core CPU and a Mali-G52 GPU. But the main ingredient in the mix is the MediaTek HyperEngine Game Technology that’s aimed at ensuring fast and smooth action in all your favourite online multiplayer games. While you’re indulged in gaming, it makes sure that there’s dynamic management of CPU and GPU memory to not just deliver smoother performance but also manage power consumption efficiently. For online games, its ability to intelligently predict Wi-Fi and LTE concurrency is a major boon. The MediaTek HyperEngine Game Technology also makes sure that your connection doesn’t drop even for a moment when there’s an incoming call during your gaming sessions.

The Tecno Camon 16 has been equipped with a large 6.8-inch IPS LCD panel with HD+ resolution. Despite this big panel, the phone’s size has been kept small thanks to the slim bezels. This also means it’s a full-screen front surface, which does wonders for the immersion levels that the phone is able to offer. Whether it’s watching movies or playing games, this panel will ensure that you’re fully engrossed in the content. Instead of a notch, it uses a Dot-in punch-hole for housing the front camera, making sure that there’s little to no hindrance to your visual experience. 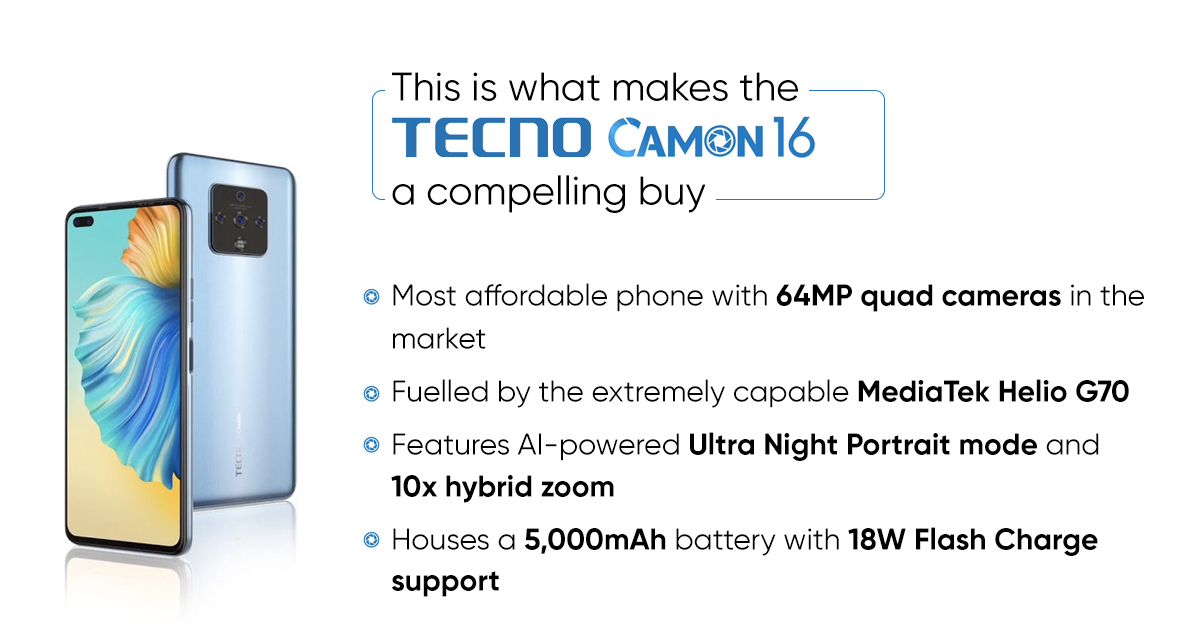 Beneath the beautiful exterior of the Tecno Camon 16 lies a 5,000mAh battery that will easily last you an entire day, no matter how extensive your usage. And by the end of the day, you’ll still have some juice left in your phone for some bedtime browsing. This 5,000mAh battery is supported by 18W fast charging, moreover. That being said, the presence of the MediaTek Helio G70 chipset onboard this phone is great news for battery efficiency. Just like the MediaTek HyperEngine Game Technology harnesses CPU and GPU usage efficiently while gaming, the various other optimisations on the chipset make sure that you ride through the day without wasting any battery life.

These five factors really make a big case for the MediaTek Helio G70-powered Tecno Camon 16 smartphone. It’s a compelling handset to buy and its low price of Rs 10,999 gives you one more incentive to go for it.