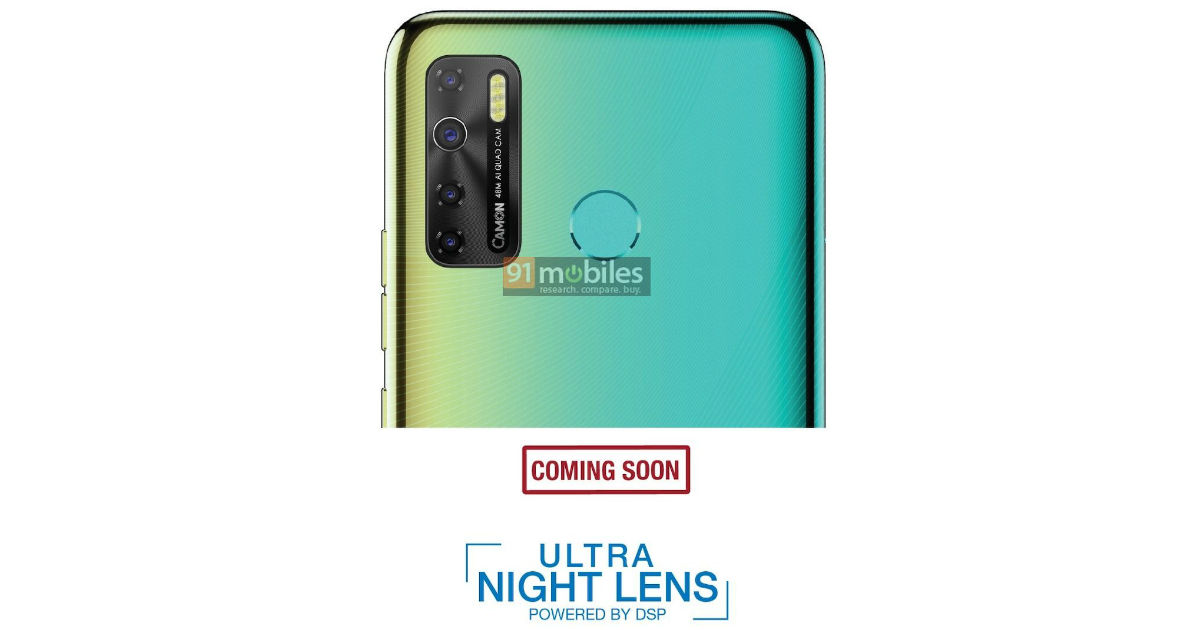 91mobiles has exclusively learned from industry sources that TECNO is gearing up to launch a new Camon-series smartphone in India with 48MP quad-cameras. The TECHNO 48MP quad camera phone will launch in India later this month with a price tag under Rs 10,000 price segment, as per our sources. We have also obtained a render of the phone that shows the rectangular camera module with LED flash, and Camon and 48MP AI quad-camera carving. The handset will rock Ultra Night Lens powered by a DSP. It has a rear-mounted fingerprint sensor for security and a gradient colour design.

As per the render, the volume rocker and power button are present on the right side of the TECNO Camon smartphone. Unfortunately, nothing much is known about the upcoming TECNO Camon phone at the moment. This will be among the few 48MP quad camera phones to launch in India under Rs 10,000. The smartphone will directly take on the Redmi Note 8.

TECNO Spark Go Plus was the company’s most recent launch in India. The smartphone flaunts a 6.52-inch HD+ display with 1,600 x 720 pixels resolution, 20:9 aspect ratio, and 480 nits brightness. It is powered by a 2GHz quad-core MediaTek’s Helio A22 processor coupled with 2GB RAM and 32GB storage that is further expandable up to 128GB via microSD card. The TECNO Spark Go Plus boots Android 9.0 Pie with HIOS 5.5.2 custom skin on top.

In terms of optics, the TECNO Spark Go Plus rocks an 8MP f/2.0 rear camera with dual-LED flash, AI beauty mode, and bokeh effect. On the front, there is an 8MP snapper for selfies and video chats. There is a rear-mounted fingerprint sensor for security, along with Face Unlock 2.0 for facial recognition. The TECNO Spark Go Plus measures 166.7×75.8×8.4mm and packs a 4,000mAh battery with AI-based power-saving and safe charging features. Connectivity features dual 4G LTE support, Wi-Fi b/g/n, Bluetooth 4.2, and GPS.