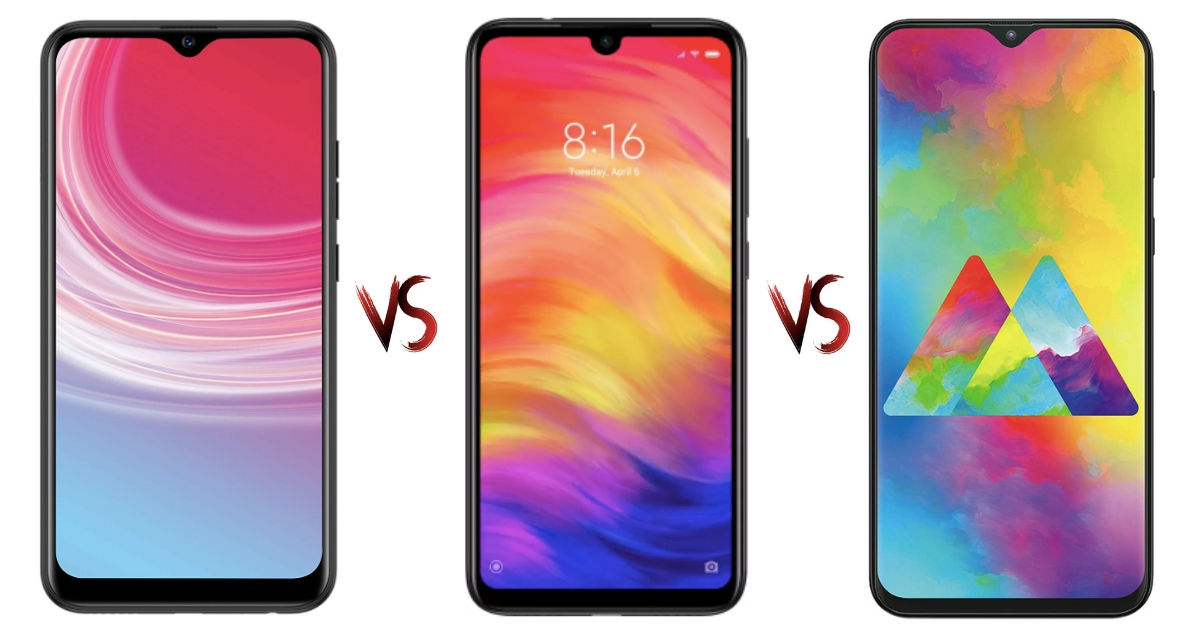 Tecno, a Chinese smartphone manufacturer, recently released the CAMON i4 (first impressions) in India as the cheapest triple-rear camera smartphone in the country. If you haven’t heard of this brand, do not worry, it only entered the Indian market two years ago. The company only has a few phones on sale, with the new CAMON i4 being positioned as a mid-range smartphone. It will be competing against similarly priced devices from Samsung, Xiaomi and others. In this post, we are going to compare the Tecno CAMON i4 price in India and specifications with those of the Redmi Note 7 and the Samsung Galaxy M20.

The CAMON i4 by Tecno is a mid-range smartphone with a budget price tag. The 2GB RAM + 32GB storage variant is priced at Rs 9,599. If you would like the 3GB RAM variant, then that would cost Rs 10,999. There’s also a top-end version with 4GB RAM and 64GB of onboard storage, which is priced at Rs 11,999. The phone is available in Midnight Black, Nebula Black, Aqua Black and Champagne Gold.

Coming to the differences in specifications, let’s start with the most important selling point of the new Tecno CAMON i4. The smartphone comes with a triple-rear camera setup, which is unheard of in the price segment. It features a primary 13-megapixel sensor, which is paired with an 8-megapixel wide-angle lens, and a 2-megapixel depth sensing unit. The camera setup is aided with AI software with features such as Beauty mode, AR mode, AI Auto Scene Detection, Night Algorithm 2.0, Rear Super Quad flash. A 16-megapixel sensor is available for selfies.

Now, let’s talk about the other features of the phones. The CAMON i4 features a 6.22-inch HD+ LCD panel with a notch at the top. It gets a plastic body with grooves at the back for better grip. Both the Redmi Note 7 and the Samsung Galaxy M20, come with a 6.3-inch FHD+ display and a tiny notch. The Xiaomi phone gets a glass back, whereas the Samsung model features a plastic shell all around.

In terms of performance, the Redmi Note 7 is the winner, since it features a Snapdragon 660 chipset. The CAMON i4 gets two options for processors. The 2GB and 3GB RAM variant gets a MediaTek Helio A22 processor, whereas the top variant gets the Helio P22 chipset. The Samsung phone is powered by the Exynos 7904 processor. All three devices feature a microSD card slot for storage expansion.

The CAMON i4 boasts a 3,500mAh battery and the Redmi Note 7 features a larger 4,000mAh cell. However, this battle is won by the Galaxy M20, which comes with a massive 5,000mAh battery. All three devices support fast charging, come with the USB Type-C port, rear mounted fingerprint scanners, and 3.5mm headphone jack. As for software, the CAMON i4 runs Android 9 Pie out of the box with HiOS 4.6 UI on top. The Redmi Note 7 and the Galaxy M20 also run on Android 9.0 Pie, with their respective custom UIs on top.

In conclusion, if you are looking for a budget smartphone with the most number of features, then the Tecno CAMON i4 is something to consider. However, the Samsung Galaxy M20 has a larger battery and is probably more reliable, similar to the Xiaomi phones.