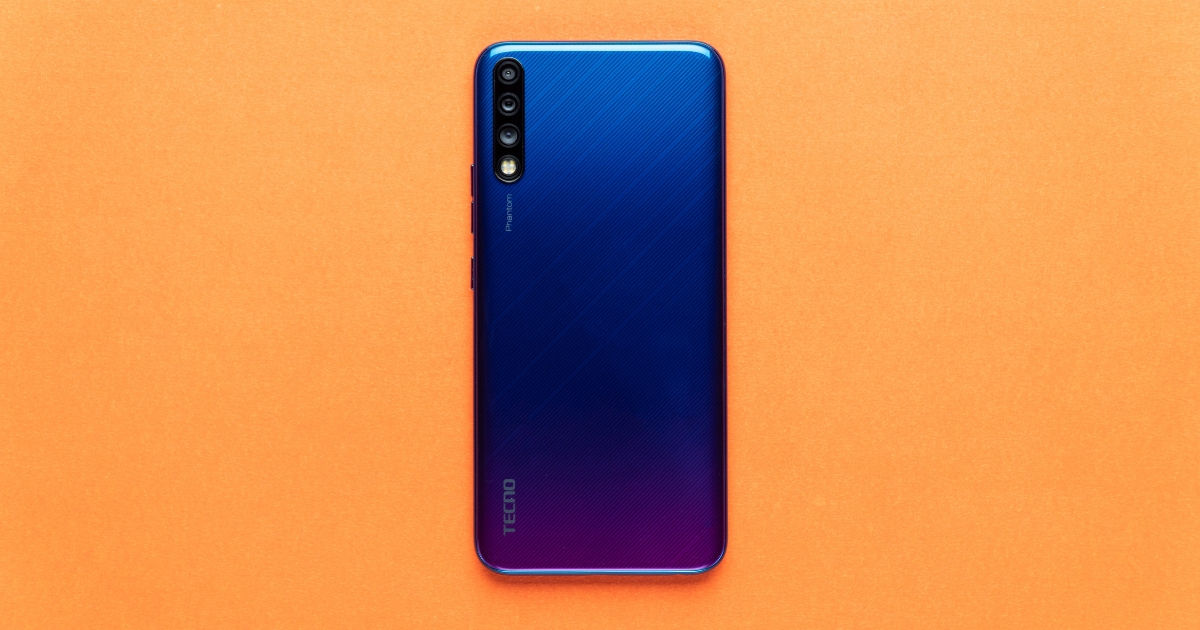 The fact that online-centric brands like Xiaomi, Realme and even OnePlus are bulking up their offline presence in India goes on to show that the brick-and-mortar route is a vital channel for building up market share. And one brand that has had continued to have a dogged focus on offline retail shops is Transsion Holdings-owned TECNO. The phonemaker made its debut in April 2017 in India and mainly caters to the budget segment in the country. But with its latest offering, the company is changing its tack. Christened the TECNO Phantom 9, the handset not only offers the latest features, but also marks the brand’s foray into the online retail space. We recently got it in our labs, and as is customary, we took it through an unboxing and hands on.

The TECNO Phantom 9 ships in a rectangular box with a grey hue, bearing the outline of the smartphone up top, which is a unique touch. As soon as you open the package, you’ll find a cardboard enclosure which has a SIM-ejection tool, some documentation, and a soft, rubberised cover. Underneath that, you’ll find the handset itself, and below that, there’s a 10W wall adapter, a micro-USB cable and a pair of earphones. Now onto the device itself… 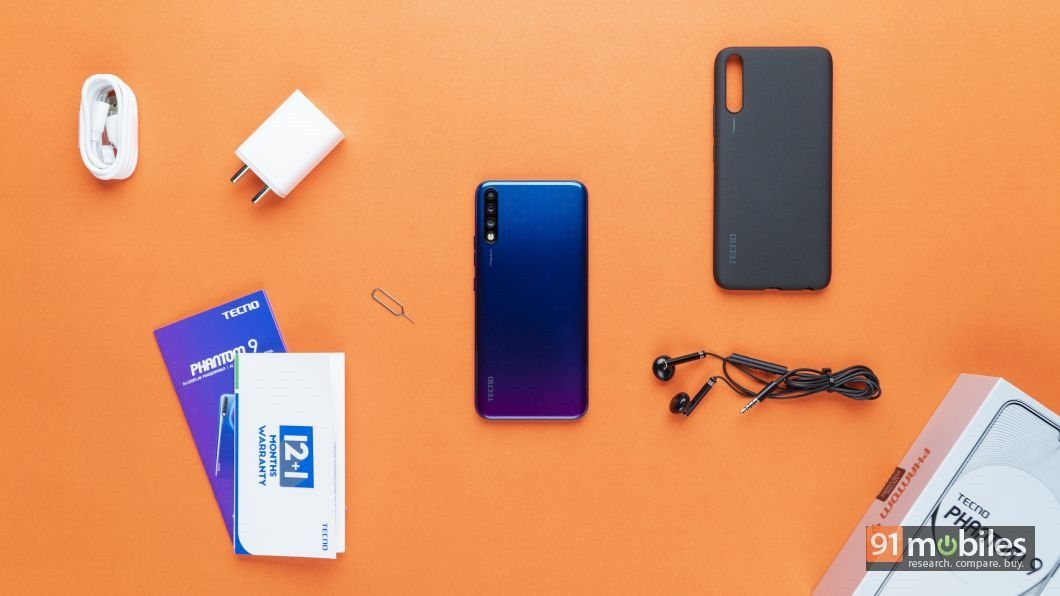 In the past few months, smartphone companies have been bringing their A-game when it comes to aesthetics of their offerings, and honestly, we’re not complaining. The TECNO Phantom 9 is also one such device which will grab your attention almost immediately. Up front, it features slim bezels all around with a waterdrop notch on the top of the panel. But it’s the rear panel that’s the star of the show (in this case, the handset). The gradient hue goes from blue to purple (dubbed Aurora), and looks quite stunning, for the lack of better word. What adds to the charm are diagonal lines, which also looks quite pleasing by bouncing off the light falling on the surface. 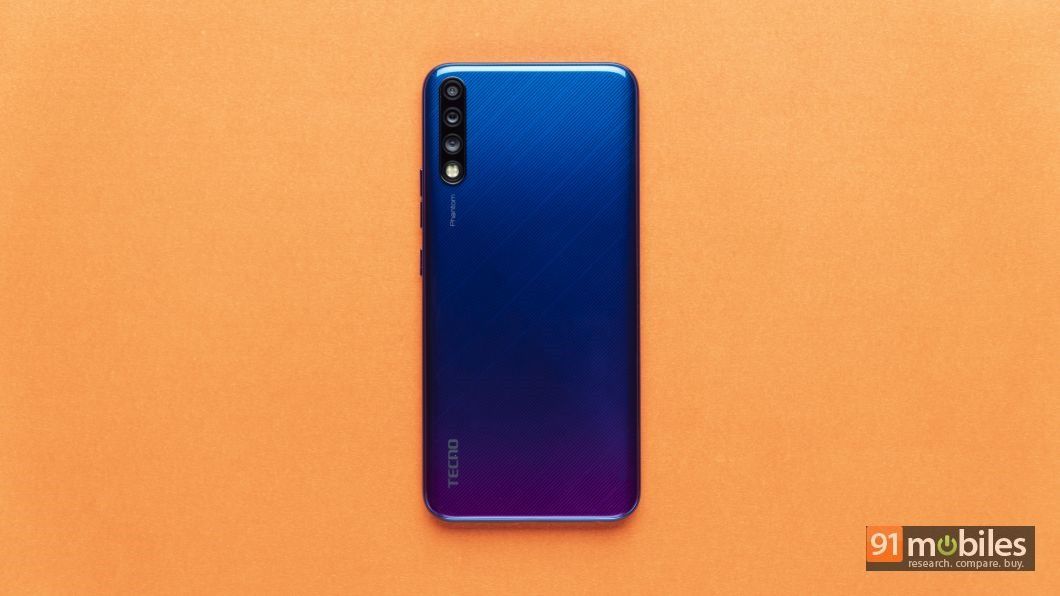 Pick up the Phantom 9, and you’ll be surprised how light it feels. Tipping the scales at 167g, the device is quite lightweight. It’s sleek too, with its waistline measuring 7.85mm. As far as buttons and ports are concerned, you won’t find anything out of the ordinary, though I think, it’s high time that phonemakers adopt the USB Type-C standard.

One thing that’s missing is a fingerprint sensor. That’s because the brand has opted for an under-display fingerprint reader. The authentication method works quite well, though I wouldn’t say that it’s the fastest I’ve come across. But the fact that the Phantom 9 is among the most affordable phones with an optical fingerprint module makes us overlook that. Of course, you could use the face unlock on the handset as well. 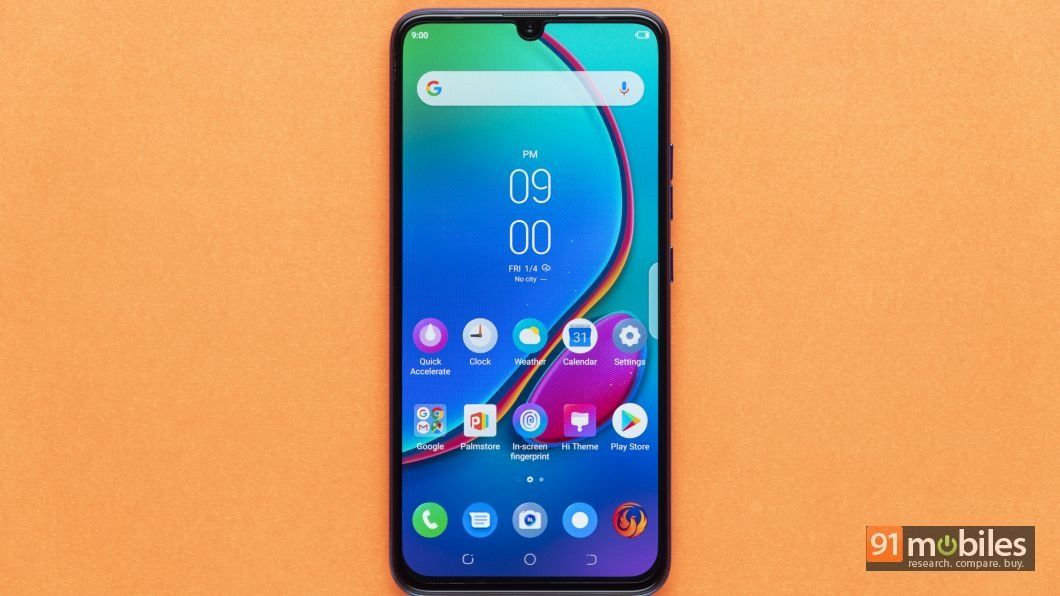 Speaking of which, the TECNO Phantom 9 is bestowed with a 6.4-inch display, which bears full HD+ resolution. Thanks to the AMOLED panel, the screen offers good contrast levels and vibrant colours, which should make reading text or watching videos an enjoyable experience.

Another pull factor of the Phantom 9 is its cameras. At the back, the device features a trio of sensors, with the primary shooter rated at 16-megapixels and featuring an aperture of f/1.85. The main camera is paired with 8MP and 2MP snappers. For low light, there’s a quad-flash module and the camera app also comes with Night Algorithm 2.0 to enhance images in such situations. TECNO has also offered an AI mode to deliver better output, while the camera app offers both wide-angle and 2x zoom modes along with an option to capture super-macro shots (up to a distance of 2.5cm). For selfies, the handset makes use of a 32MP selfie shooter which also comes with a powerful pair of LED flash units to offer illumination in dim environments. 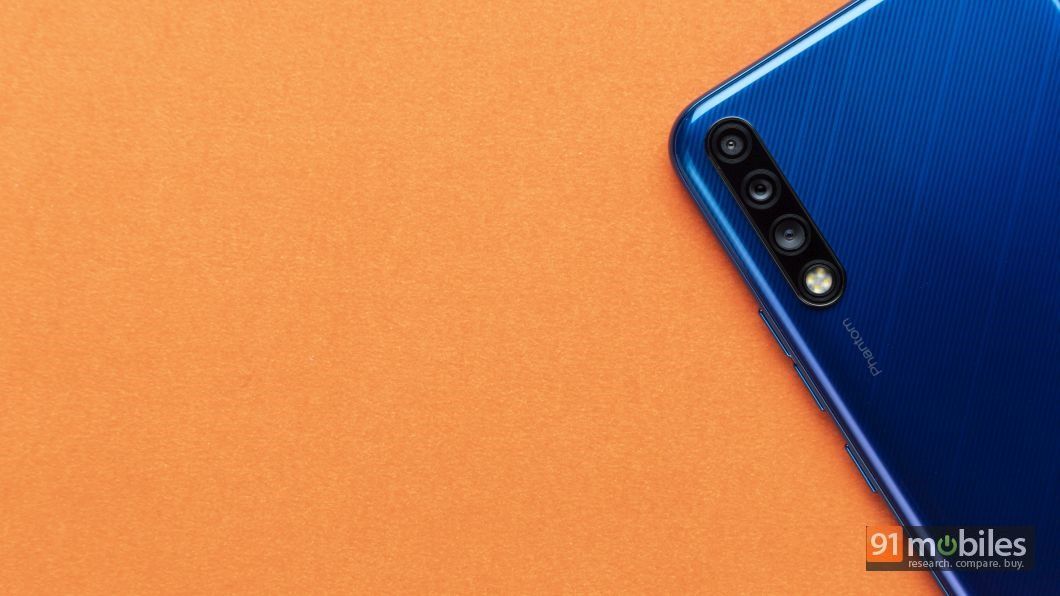 Under the hood, the TECNO Phantom 9 packs in MediaTek’s Helio P35 SoC, which works alongside 6GB RAM. The hardware combination should ensure smooth usage during day-to-day tasks, but I’m not sure how the device would handle intensive tasks or HD games such as PUBG, especially when compared to handsets that use powerful chipsets such as Snapdragon 675 and Snapdragon 710 in this price bracket. Taking care of storage is 128GB of memory onboard, which can be topped up by another 256GB via a microSD card.

The Phantom 9 sips juice from a 3,500mAh battery. On the storage side of things, the smartphone runs Android 9.0-based Hi OS 5.0. While the UI seems to be smooth, it’s laden with bloatware in the form of Asphalt Nitro, Facebook, Opera News, and PHX Browser among others. 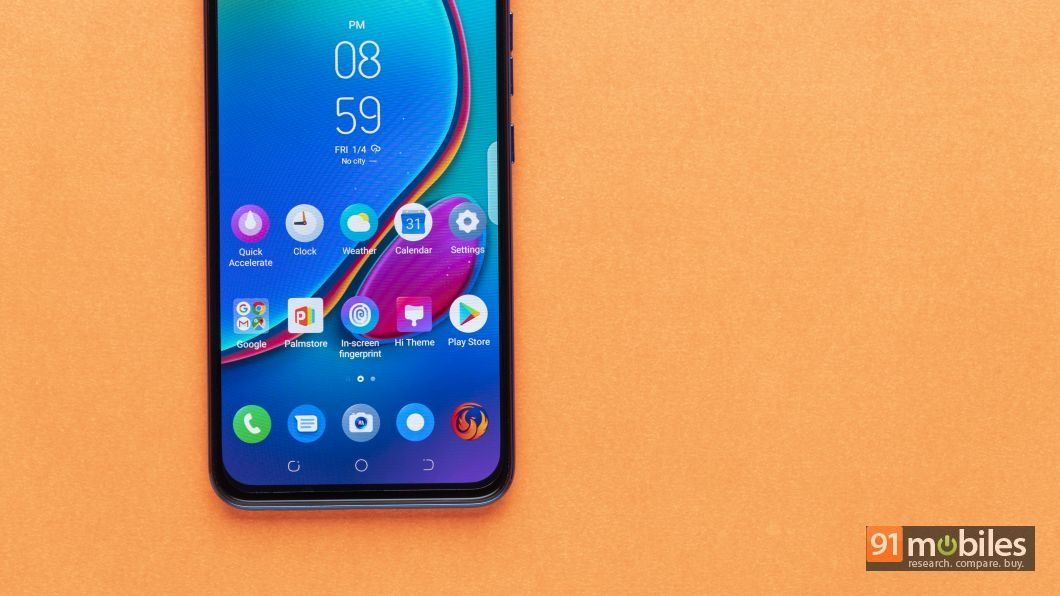 To sum up, with a price tag of Rs 14,999, the TECNO Phantom 9 brings interesting features such as an in-display fingerprint reader and a powerful set of cameras. But it’s also priced in the territory which is extremely competitive, and goes up against powerful offerings from both established players as well as new-age brands. Sample this: for the same price, you could get the triple rear camera-toting Vivo Z1 Pro (review) or Honor 20i (review), with the former shipping with the powerful Snapdragon 712 SoC. And for Rs 1,000 lower, there’s the 48MP camera-toting Redmi Note 7 Pro (review) and the Snapdragon 710-fuelled Realme 3 Pro (review). And the fact that TECNO is letting go of its biggest advantage — offline availability — could go against its newest launch. In short, the Phantom 9 is a commendable effort, but the going may not be easy for the brand.