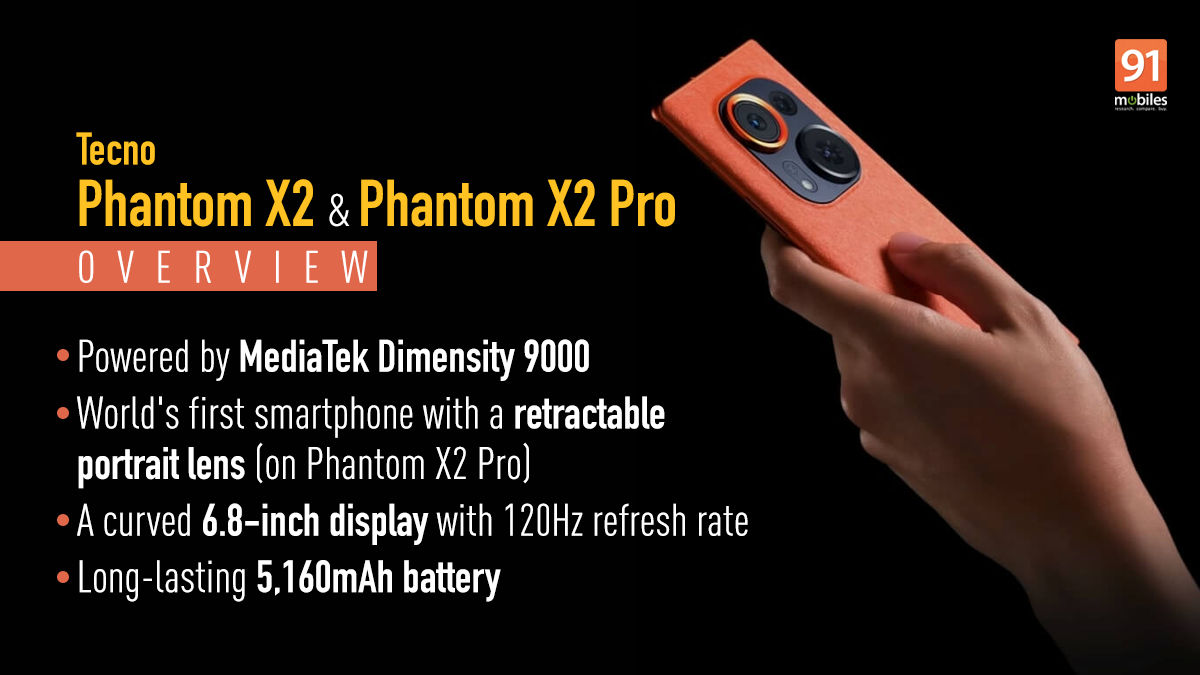 Tecno is known for its well-rounded offerings in the budget and mid-tier segments. But the Transsion-owned brand wants to shed that image. And it has gone all out to prove that by re-launching the Phantom series. The latest offerings in the Phantom range are bestowed with best-in-class features that can give several other premium devices a run for their money. Wondering why we are going gaga over the Tecno Phantom X2 and Phantom X2 Pro? Well, we give you five reasons why these flagship devices are worth watching out for.

MediaTek Dimensity 9000 is special in more ways than one… it was the world’s first chipset that was fabricated using TSMC 4nm process, and was also the first chip to feature Hybrid AI-GPU Super Resolution, and a lot more. That’s the SoC you’ll get with the newly launched Tecno Phantom X2 and Phantom X2 Pro. There will be nary an instance of lag with the octa-core processor featuring an Ultra ARM Cortex-X2 core running at 3.05GHz, and the remaining two clusters comprising 3 x 2.85GHz Cortex-A710 cores and 4 x Cortex-A510 cores taking care of high-intensity tasks or day-to-day activities, respectively.

Pair the potent chip with up to 12 gigs of RAM (8GB RAM on the Phantom X2), and the flagship duo will be able to hold multiple apps in their memories and let you switch between them instantaneously too. You’ll also get virtual RAM of up to 5GB. On the storage side of things, both the Phantom X2 and Phantom X2 Pro offer 256GB UFS 3.1 memory.

The powerful processor is complemented by an equally powerful GPU, which brings us to… 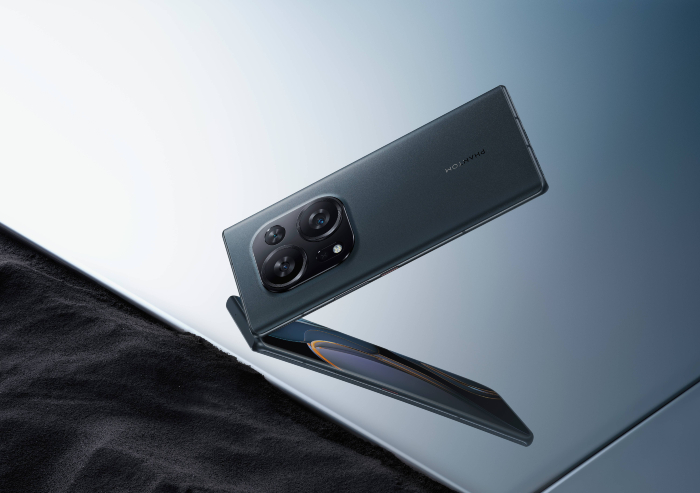 The Mali-G710 MC10 GPU features 10 cores and it enables the Tecno Phantom X2 and X2 Pro to render real life-like visuals. But that’s not all. MediaTek also offers its HyperEngine 5.0 gaming technologies which enhance the experience further. Chief among them is AI-based variable rate shading technology to offer smoother gameplay with minimal-to-no jitters. Then there’s raytracing support using Vulkan for Android. With Wi-Fi / Bluetooth Hybrid Coexistence 2.0 and Wi-Fi Fast Path, you’ll get a seamless experience without any hiccups.

Aiding the thermal efficiency is a hardware-based vapour chamber cooling system on the Tecno Phantom X2 and Phantom X2 Pro.

Now if you want to enjoy playing your favourite titles, then the display is as important, if not more, as hardware. The Tecno Phantom X2 and X2 Pro don’t disappoint in this regard with a large 6.8-inch curved display. The AMOLED panel promises punchy colours and sharp visuals with a full HD resolution. Add to it the high refresh rate of 120Hz, and the navigating and gaming experience will be super smooth on the handsets. Speaking of gaming, the devices also offer touch sampling rate of 360Hz.

Protecting the display against scratches and accidental nicks is a layer of Corning Gorilla Glass Victus.

Powerful triple cameras let you capture the world around you

You must have noticed that both the Tecno Phantom X2 and X2 Pro have a similar spec sheet, so what makes them different? Well, it’s in the imaging department. The Phantom X2 features a triple-camera array headlined by an optically-stabilised 64-megapixel f/1.6 shooter, paired with a 13MP ultra wide-angle snapper, and a 2MP depth sensor. The higher-end variant is for those who want impressive telephoto capabilities for optical zoom. That’s because the Phantom X2 Pro comes with a 50MP f/1.9 primary snapper, which is accompanied by a 50MP f/1.5 shooter that actually pops out – it’s the world’s first smartphone with a retractable portrait lens – to provide you with 2.5x optical zoom functionality. The third sensor is a 13MP lens for ultra-wide photography. The optics also get support from MediaTek Imagiq 790 ISP that supports 4K HDR video and AI-powered noise reduction among other things. This also comes in handy for low-light photography, promising sharp images without much noise. For selfies and video calls, Tecno’s latest offerings boast a high-res 32MP sensor up front. 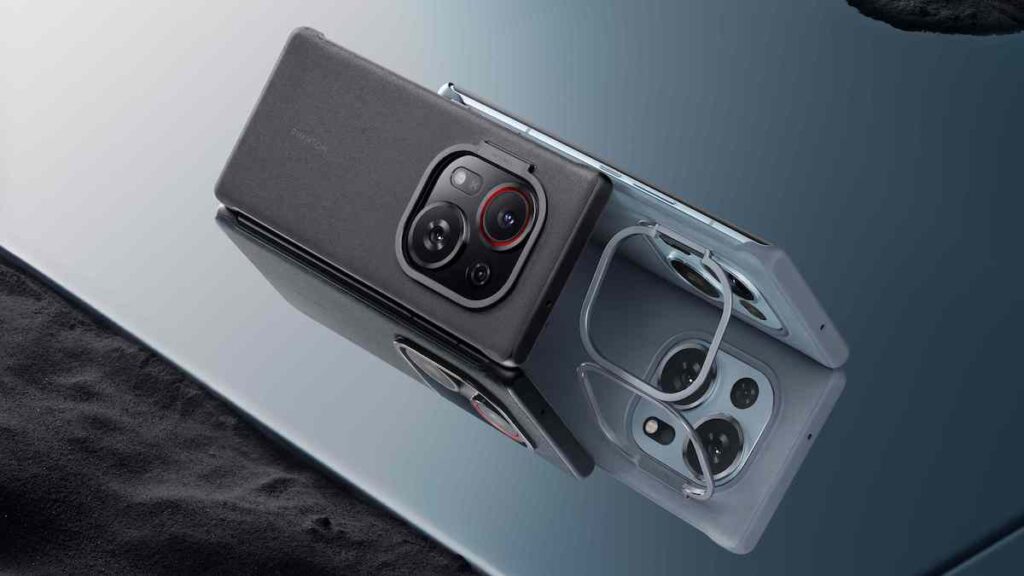 All in all, the Tecno Phantom X2 and Phantom X2 Pro are true-blue flagships that live up to their tagline of “Professional as a camera, Convenient as a phone” with their powerful hardware and software features.

A 5,160mAh battery that will last long

Tecno has made sure that the Phantom X2 and X2 Pro rightfully earn the flagship tag across all aspects. To ensure that the handsets don’t give up during the middle of the day, they come equipped with a capacious 5,160mAh Li-Po battery. The devices should last a day of use and then some more, even if you are a power user. If you do need to charge them, it won’t take long as they support 45W fast charging.

Of course, we have just scratched the surface in terms of what these flagships bring to the table. They are available in classy hues of gray and silver, and have a metal frame around to provide robust construction. They also support the latest connectivity standards, including 5G, Wi-Fi 5, Bluetooth 5.3, and more. The devices boot Android 12-based HiOS 12.0 that offers several user-friendly features. We are sure that you are as excited about getting your hands on Tecno’s latest and greatest as we are. However, you’ll have to be patient as the Phantom X2 and Phantom X2 Pro price in India and availability will be revealed later.