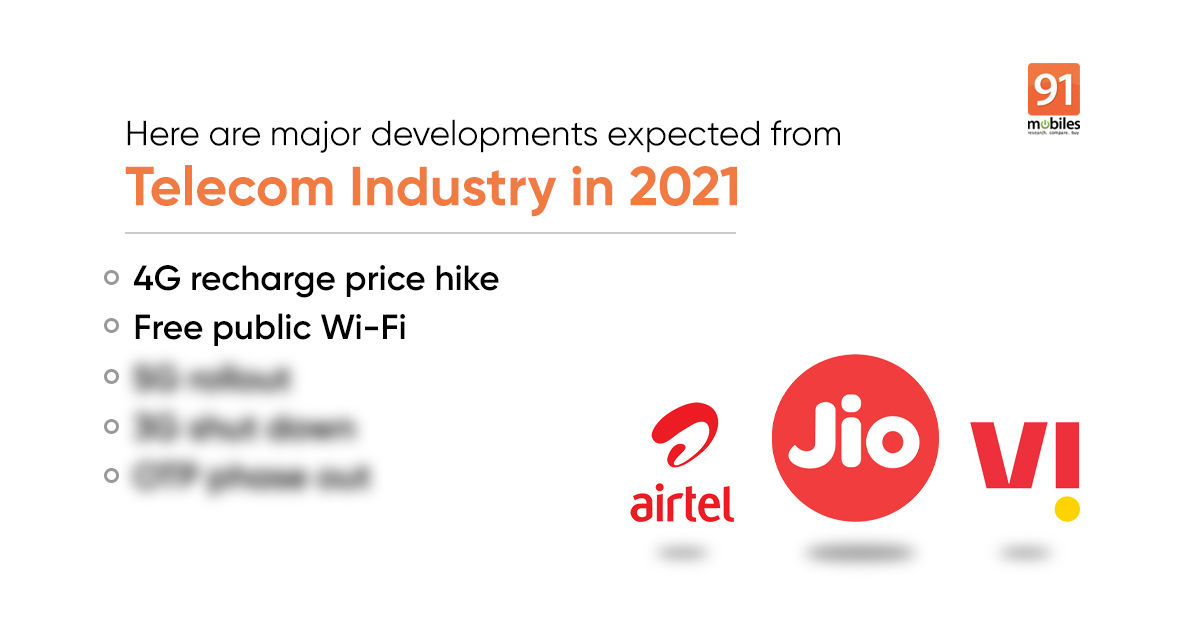 The Indian telecom sector is expected to undergo some major developments this year. The country’s 4G penetration is expected to increase further this year; leading telecom operators such as Airtel, Jio, and Vi could increase their tariffs; and 3G services may come to an end. Most importantly, 5G could finally be a thing in India as the Mukesh Ambani-promoted telco Jio is confirmed to launch the network later this year. The government will also conduct 4G spectrum auctions after nearly four years in March; the auction is expected to fetch about Rs 55,000-Rs 60,000 crore to the exchequer. Here’s a quick look at some top developments that may change the telecom industry in India in 2021.

Airtel, Jio, and Vi recharge packs may see a hike this year. Analysts believe that the telecom operator could increase the prices of their tariff by 15-20 percent. Vodafone Idea (Vi) will reportedly be the first telco to increase the prices of its recharge plans, ahead of Jio and Airtel. This will be the second tariff hike from the telcos in three years. Back in December 2019, leading telecom operators, including Jio, Airtel, and Vi, increased their prepaid plans by 25-40 percent in the country. Another round of hikes was expected in the last calendar year but it was postponed to 2021 due to COVID-19 shock, pending clarity on floor prices, and Vodafone Idea’s new branding and ongoing network integration.

PM Wani aka Prime Minister Wi-Fi Access Network Interface is the government’s pet project to elevate wireless internet connectivity in India. The project, which was launched in December 2020, allows unlicensed entities — including small vendors such as ration shops and tea stalls — to provide public Wi-Fi services by obtaining bandwidth from internet service providers. The PM Wani scheme is also said to benefit telcos, which can rely on increased bandwidth to handle the demand.

2021 could be the end of the road for 3G services in India. After shutting down its 3G networks from Chennai and Bengaluru, Vi has decided to do the same in Delhi on January 15th. As for Airtel, it’s also in the process to discontinue 3G services from its network. The telco has already pulled the plug from its 3G services from most regions across the country. That said, both telcos will continue to offer 2G networks due to the feature phone install base. Jio, which only operates in 4G, however, has urged the government to phase out 2G network from the country altogether. The company plans to increase 4G penetration with affordable 4G smartphones.

Airtel, Jio, and Vi are likely to phase out ‘one-time passwords’ or OTPs and introduce a new identity verification system. Per a report by ET Telecom, the telcos will soon verify customers using their mobile numbers using a new technology called Mobile Identity. The tech is said to be a secure universal log-in solution that matches the user to their mobile phone to log into websites and applications quickly without the entering usernames and passwords. The new verification system is currently being piloted and would be made available publicly post regulatory approval soon.

Last but not the least, 5G! The network is all set to make its debut later this year and Jio will take a lead on it by launching 5G in the second half of 2021 using in-house equipment. “Jio would take the lead in pioneering the 5G revolution in India,” Reliance Jio chairman and managing director Mukesh Ambani said at the India Mobile Congress 2020 (IMC 2020). Airtel and Vi will also follow the suit. 5G is the next evolution in mobile network technology and is already available in many parts of the world. The network has low latency and presents use cases such as AR/VR, AI, high-speed broadband, among others. A plethora of 5G capable handsets are already available in the market.