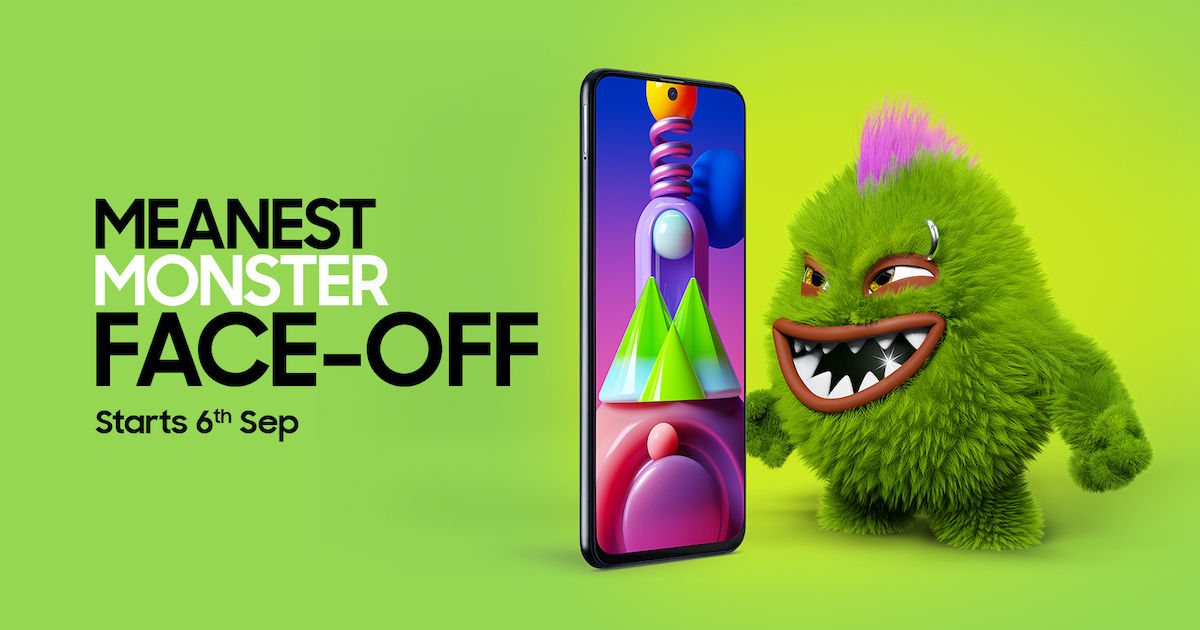 Samsung changed the smartphone industry last year with the launch of Galaxy M30s, the world’s first mainstream smartphone with a massive 6,000mAh battery. Now, the brand is raising the benchmark once again with the Samsung Galaxy M51 – the world’s first smartphone with a 7,000mAh battery! This new Samsung smartphone will give you total peace of mind if you are someone worried about running out of juice and eclipse the battery performance any other handset can deliver! But battery life is just one of the many things the Samsung Galaxy M51 excels at – this smartphone leads the mid-range segment in display quality, performance, and camera performance too, so you get the best of everything in one device!

So, let’s take a close look at some of the groundbreaking features that the new Samsung Galaxy M51 is set to bring to the M series lineup. 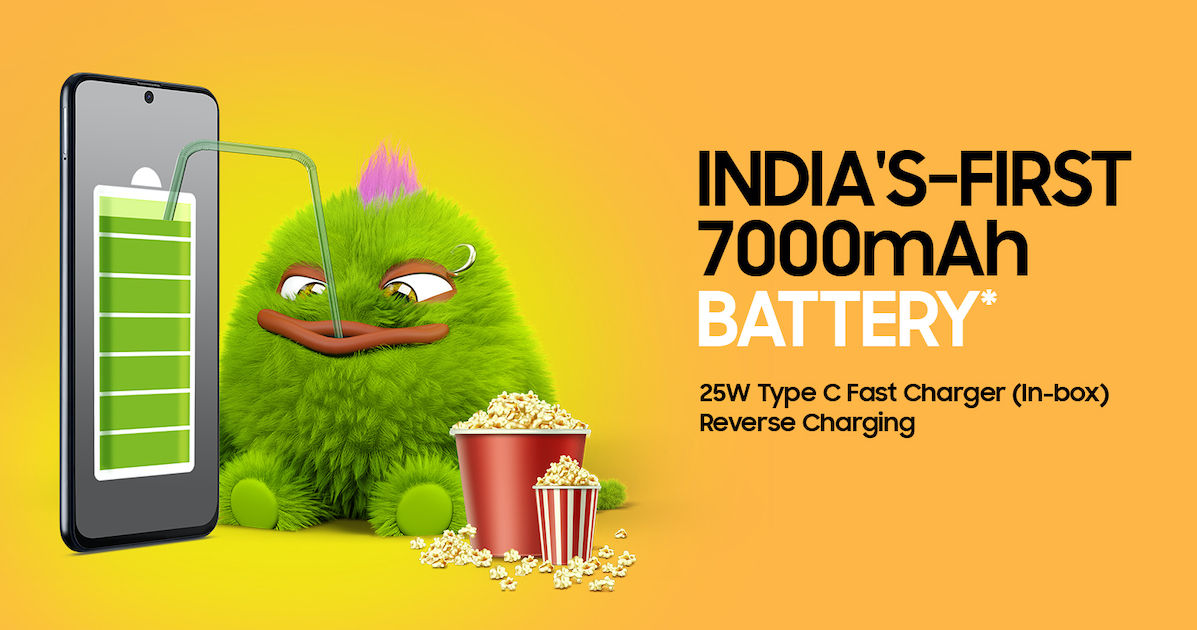 The Galaxy M series lineup was already known to have devices that offer the best-in-class battery life for consumers. Take the example of the recently launched Galaxy M31s and the Galaxy M21. Both these handsets feature a 6,000mAh battery that was already miles ahead of the competition in terms of sheer battery capacity and, therefore, battery life.

Not one to rest on past laurels, Samsung has gone several steps further and has packed a colossal 7,000mAh battery in the Galaxy M51. This makes the Galaxy M51 the first-ever mainstream smartphone to feature a battery capacity that rivals tablets. With this kind of battery prowess, consumers can expect the Galaxy M51 to easily last for a really, really long time. With excellent software optimisations and the super-efficient sAMOLED Plus display added to the mix, we are looking at a smartphone that will never give you anxiety about running out of charge. With the Galaxy M51 fully charged, you are easily looking at well over two days of battery life on a single charge – even with heavy usage.

Not content at offering the largest battery capacity ever on a mainstream smartphone, Samsung has also added extra features in the Galaxy M51 that will make life easier for the users. We are, of course, talking about the support for 25W fast charging that Galaxy M51 offers. Samsung also bundles this fast charger and cable in the box. With its battery capacity rivalling power banks, the Galaxy M51 also supports the reverse charging feature. Using this feature, consumers can charge other smartphones or wearable products like wireless headphones and smartwatches using just the Galaxy M51. 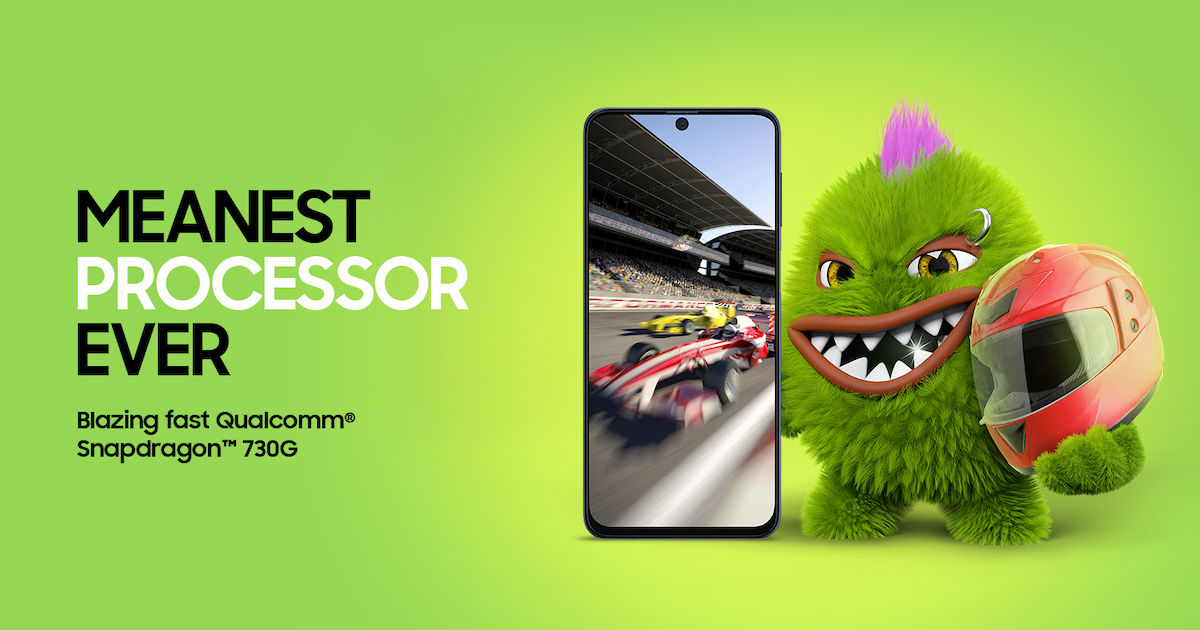 The Samsung Galaxy M51 cements its position as a performance beast in the mid-range segment thanks to the powerful Qualcomm Snapdragon 730G processor. Made using the 8nm manufacturing process, the Snapdragon 730G chipset is as efficient as it is powerful. This octa-core processor packs two ARM Cortex-A76 performance cores clocked at up to 2.2 GHz, and six ARM Cortex-A55 efficiency cores clocked at up to 1.8 GHz. The Qualcomm Snapdragon 730G chipset is an excellent choice for gaming enthusiasts and handles even the most graphics-intensive games with absolute ease thanks to the powerful Adreno 618 GPU.

With ample RAM, super-fast storage, and a powerful and ultra-efficient GPU at its disposal, the Samsung Galaxy M51 lives up to the title of the Meanest Monster yet in the Galaxy M series. 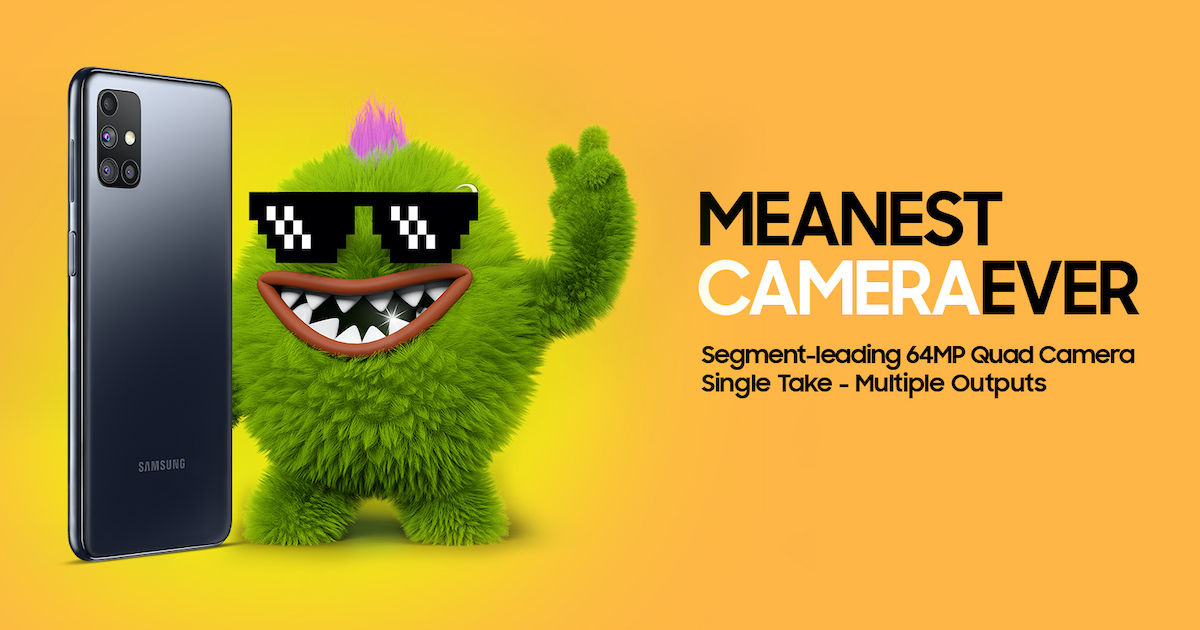 The Samsung Galaxy M series handsets are also known for their excellent camera performance. It is no surprise, therefore, to see the new Samsung Galaxy M51 packed with a wide array of superb camera-centric features that will make it the leader its segment when it comes to sheer camera prowess.

Samsung Galaxy M51 sports a 64MP quad-camera array at the rear, with support for the revolutionary Single Take feature. With Single Take, you can be assured of the fact that you will end up with a vivid memory of an important moment in multiple formats. This feature comes in especially handy when you are confused about capturing a specific moment in the form of a still image or a video. With the Samsung Galaxy M51 and Single Take, you get the option to have that memory in both the formats – seven still images and several three short videos with just one click! Single Take also lets users choose the best frame and share it immediately with friends and family.

Note that the Single Take feature is only scratching the surface as far as the overall camera capabilities of the Samsung Galaxy M51 go. The smartphone’s 64MP quad-camera setup and a high-resolution 32MP front-facing camera make it a powerful photography tool that can even give a complex to standalone point and shoot cameras. 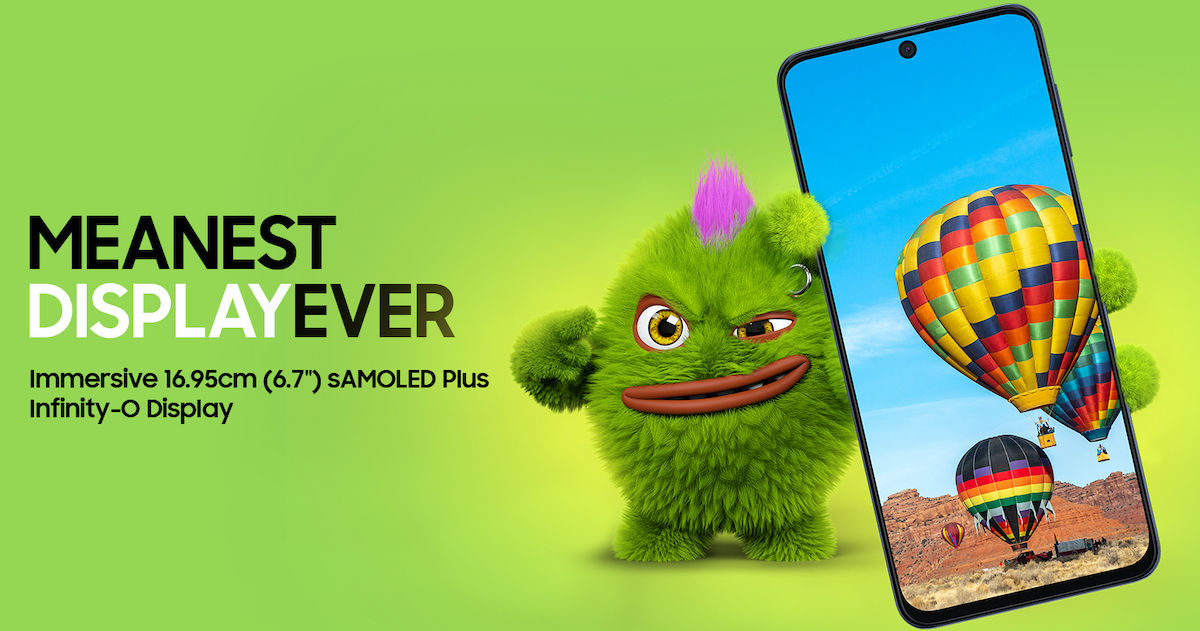 As the global leader in Super AMOLED display technology, it is not the least bit surprising that the Samsung Galaxy M51 gets the world-class, sAMOLED Plus panel. At 6.7-inches, this is the largest ever display to be used on the Galaxy M series. The display also gets a strategically placed, small Infinity-O ‘punch-hole’ for the front-facing camera that promises a distraction-free content consumption experience

As expected of a high-quality AMOLED panel made by Samsung, the expansive display of Galaxy M51 lets users watch high-quality content with rich colours and fantastic saturation levels. This makes Samsung Galaxy M51 your perfect partner for content consumption. 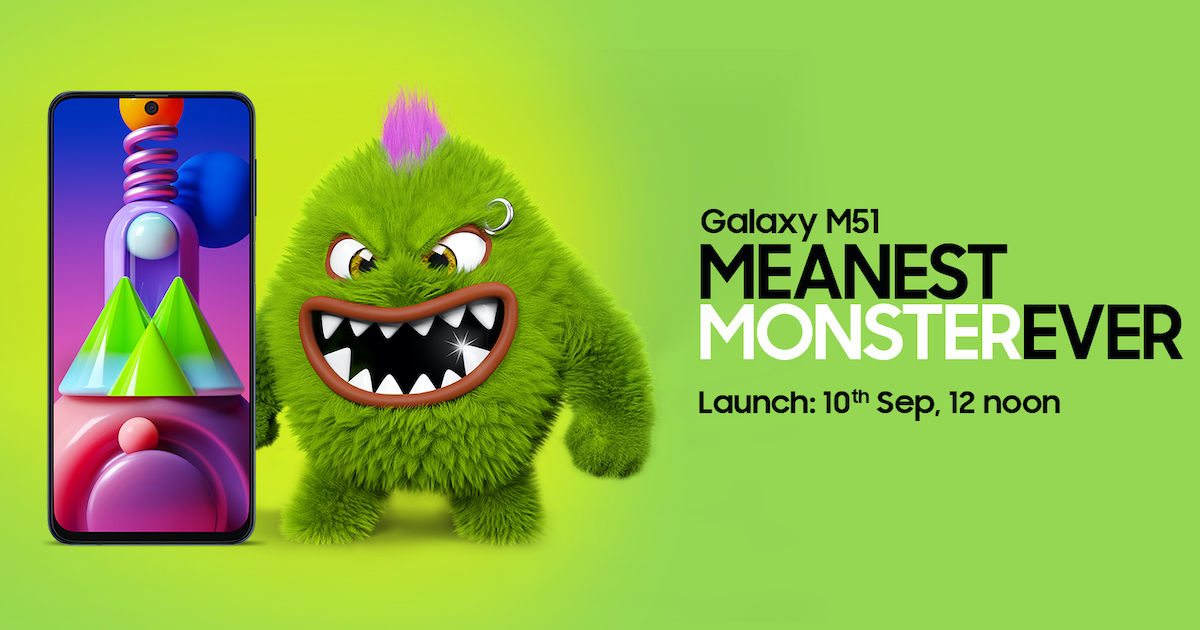 Samsung is all set to launch the new Galaxy M51 on September 10th. The launch event will be live-streamed at 12pm, following which the pricing, rest of the specifications, and availability details shall be shared. Samsung touts the newest member of the Galaxy M family as the Meanest Monster ever – and going by its specifications and features, we are convinced that the Galaxy M51 will prove to be as successful as its predecessors!

Learn more on Samsung.com and Amazon.