When it comes to air purifiers, Philips, Dyson, and Xiaomi are among the few reliable brands that come to mind. Smart Air is a nascent brand in the Indian market and isn’t quite as popular compared to its rivals, but its air purifier, The Sqair, deserves a second look. The device should fit the bill if you’re looking for a dependable air purifier under Rs 10,000 that delivers clean air with no gimmicks. Read on my overview of The Sqair air purifier to find out more:

I’ve been using The Sqair air purifier for over a week now and I can’t get over its design. The device boasts of squarish (hence the name?) form factor with a matte white finish, two buttons on either side that act as clips to lift the cover revealing the in-built fan to access the filter, and wooden pegs at the bottom. The wooden pegs have a screwed down approach and require a DIY when you first unbox the air purifier. There is a grille on top from where the filtered air comes out. The top of the air purifier also sports a rotary dialer – similar to old-style telephones – to adjust the fan’s speed. 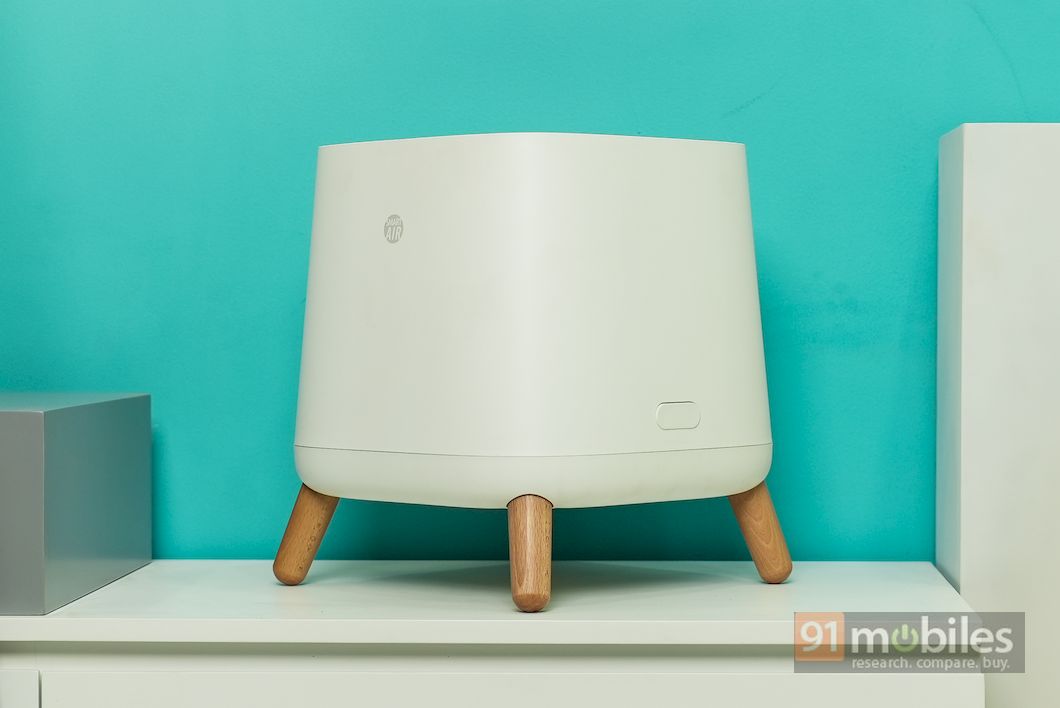 It is this minimalism and classy aesthetics that make The Sqair stand out among the rest of the low-cost air purifiers in this segment. I can confidently say that no matter where you place the air purifier in a room, it’ll blend with your home decor. The air purifier weighs a little north of 5 kg – which means it won’t be really heavy to carry around the room. As for the dimensions, The Sqair comes in at 33 cm x 33 cm x 37 cm. 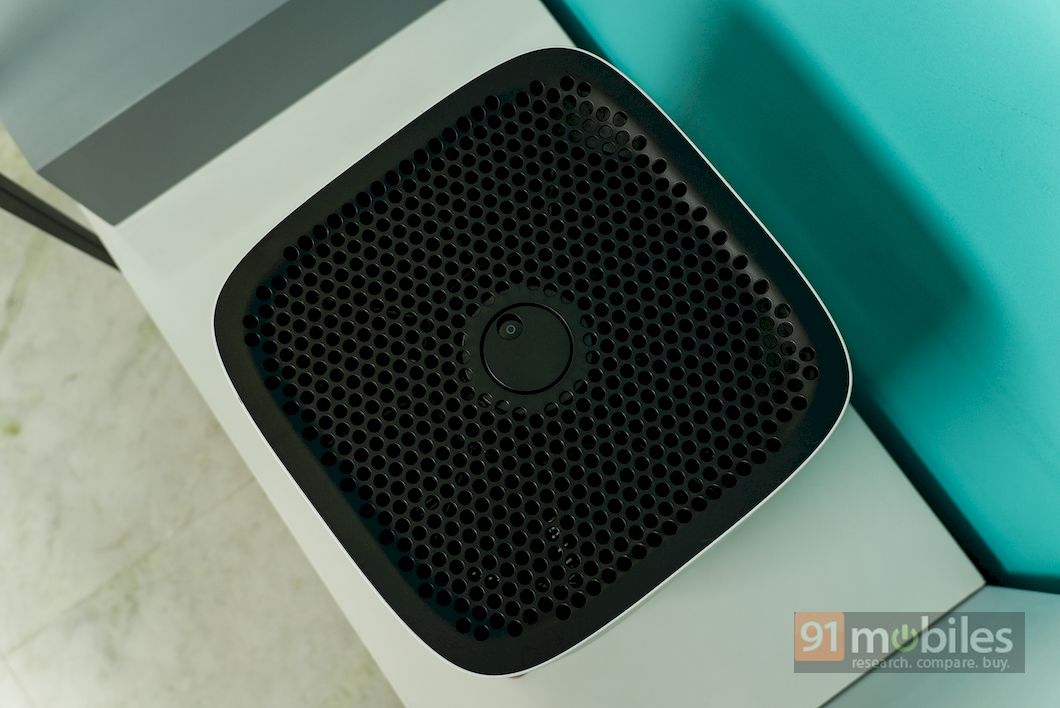 Coming to the performance, The Sqair is rated to be among the most efficient and cost-effective air purifiers out there. The device has a CADR (Clean Area Delivery Rate) of 315 metric cubes per hour for a room as big as 430 sq foot. The company claims that the air purifier takes around 25 minutes to purifier the air of a given room. Sadly, there is no way to verify that as The Sqair lacks a monitor or screen that tells you the AQI (air quality index) in real-time, but you do feel the difference.

Read more: Can air purifiers protect you against coronavirus?

The Sqair air purifier is said to be quieter too, and I can vouch for this. When in action and with the fan speed set at ‘1’, it’s difficult to tell whether the device is actually running as it’s extremely quiet. At speed ‘2’ and ‘3’, you’ll hear some noise – but it’s not disturbingly loud. According to Smart Air, The Sqair has a sound decibel of 52 on high. The air purifier only has manual controls, which means there is no ‘auto mode’ that can automatically adjust the fan speed depending upon the air quality. 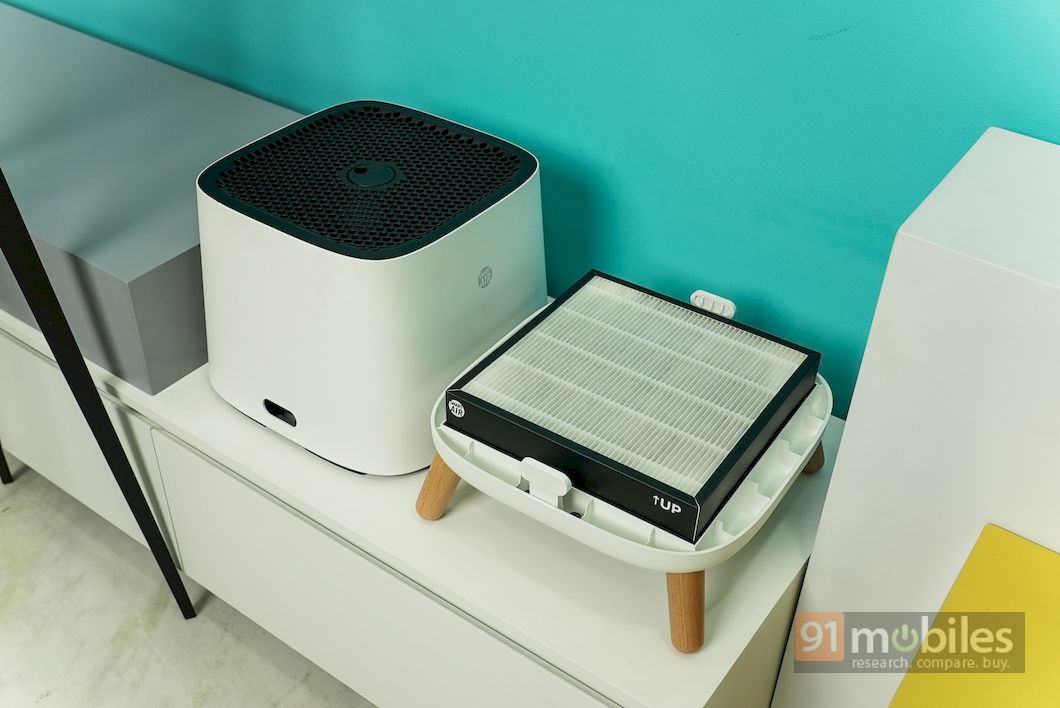 The Sqair comes with a HEPA filter, which is the gold standard filter for any air purifier to combat air pollutants, including moulds, dust mites, bacteria, viruses such as COVID-19, and particles as small as 2.5 micrometres in size, among other things. It’s the only filter you’ll find on this air purifier. There’s an option to add a carbon filter whose sole purpose is to remove bad odour from the air, but that comes at an additional price. The HEPA filter has a life of around three months (if you’re using the air purifier for 8 hours a day on an average). The refill costs Rs 1,499. The carbon filter is priced at Rs 999, and it can also last up to three months. The Sqair price in India is set at Rs 8,499. If you’re looking to buy the air purifier with a carbon filter from the beginning, it will cost you Rs 9,499. The air purifier can be fetched via e-commerce platforms including Amazon.in. On its website, Smart Air claims that ‘The Sqair does one thing: it cleans air’, and it’s indeed the case. The air purifier doesn’t come with app support, sensors, and additional filters like pre-filter or cold-catalyst filter. That’s probably the reason why The Sqair is said to be 30 per cent more cost-effective than other air purifiers including Xiaomi Mi Air Purifier 2S, Philips AC1215/20, BlueAir Classic, and more.

The closest competitor to The Sqair would be Mi Air Purifier 2C – which is currently selling in India at Rs 6,999. The air purifier also comes with standard specifications, with no smart connectivity features and real-time AQI indicator, but has higher CADR and room coverage compared to its counterpart.

Overall, The Sqair is easily one of the better-looking air purifiers under Rs 10,000 in India. The modern aesthetics and form factor make it easy to keep the product in any room without disturbing the decor of the room. Unfortunately, The Sqair’s lack of a display or supported app doesn’t really offer any empirical proof that the air purifier is doing its job, which may make you feel less confident in its performance.