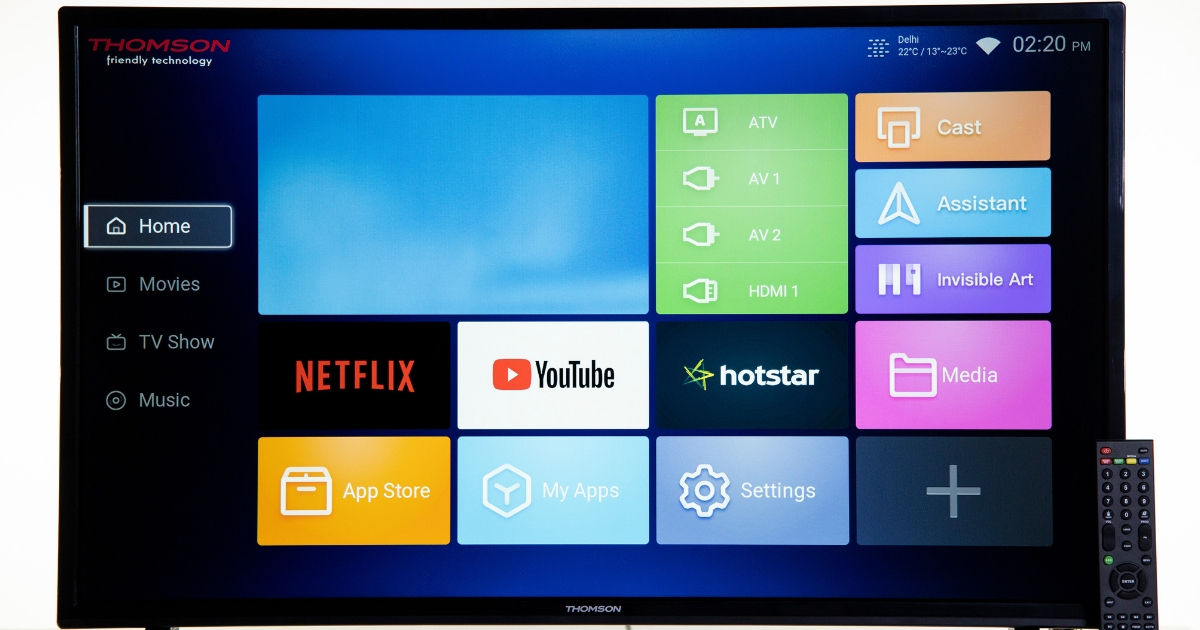 We live in an era where you would be forgiven to assume that TV industry has climaxed, thanks to the popularity of Netflix, Amazon prime and other such streaming services. However, the latest study by the leading analysis company, Ernst & Young‘ of M & Sector in India says otherwise. The study reveals that television is still the number one segment with digital media perched on the fourth marker. And it seems that the fact is not lost on TV makers like Xiaomi, YU and Thomson, who are disrupting the Indian TV market with their affordable, feature-rich smart TVs. The 120 years old French company, Thomson recently added the most affordable variant to its UD9 series of Ultra HD Smart TVs – UD9 Series 40. The latest affordable 4K smart TV arrived at our premises recently and here’s my two cents. 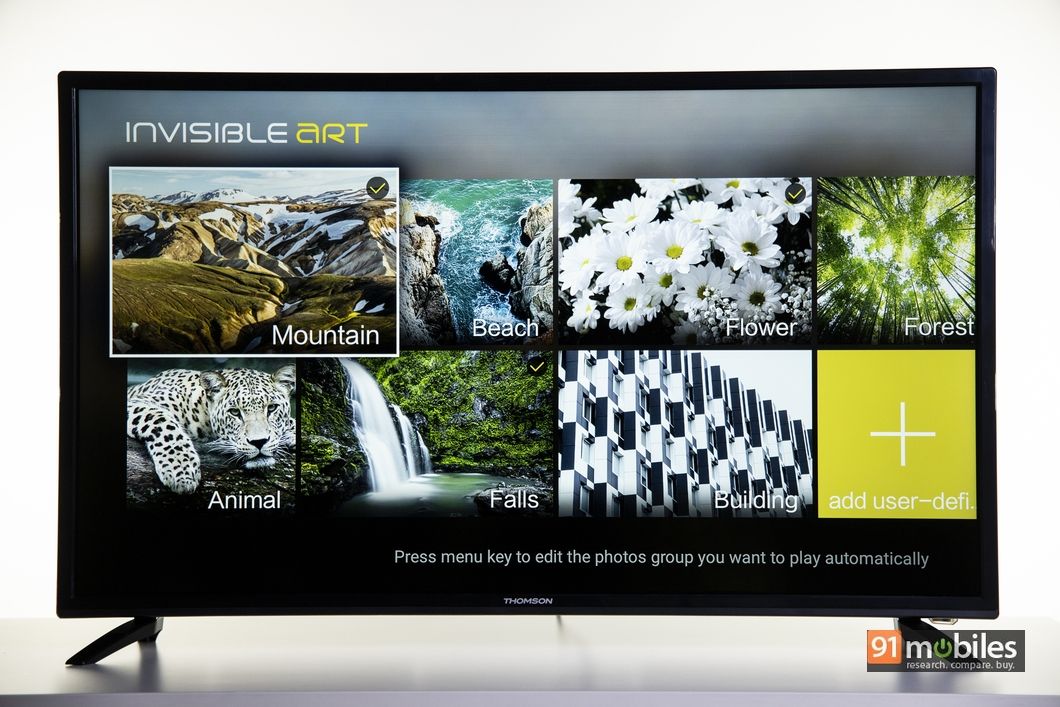 The Thomson UD9 Series 40 continues along the lines of UD9 series and comes with an edge-to-edge display featuring bezels all around, which are pretty sleek for a budget TV. However, the construct of the Thomson UD9 40-inch smart TV gives away the price point as it’s completely crafted out of plastic. The bezels on the front flaunt a glossy finish so it does look good no matter wherever you put it. The provided plastic feet are also glossy and considering the light profile of the TV are quite stable on the surface. This means even you don’t want to mount the TV on the wall (using the provided mount), the feet works equally good and makes it easier to move the television if need arises. Let’s get the specs out of the way first, the UD9 series 40 comes with an LED display flaunting 4K UHD (3,840 x 2,160 pixels) resolution. Thomson claims that the TV uses a display panel manufactured by Samsung. While the colours, brightness, viewing angles are par for the course, the display flickers when pressed slightly. The UD9 Series 40 TV also comes with HDR support and is capable of playing 4K videos on YouTube and Netflix with crisp resolution.  Both apps are pre-installed on the device along with Hotstar, which is a plus. There is also Dynamic Backlight feature as well as Eco mode on the remote control, which controls the brightness to save power.

As for the connectivity options, you get 2x USB ports, 3x HDMI, 2x AV and Wi-Fi. For audio, the latest television set comes with a thin strip of a sound bar, which is stealthily place below the bottom bezel and can easily be missed if you are not looking closely.

The smart TV runs on Android 7.1 Nougat and is powered by a dual-core processor featuring Mali-450 GPU. During my short stint with the TV, the custom interface used by Thomson felt snappy and jumped between various modes and tabs seamlessly. There are four tabs on the left hand side – Home, Movies, TV Show and Music, which are self explanatory.

The Home page is a collection of tiles comprising interface options (HDMI, AV, Media and more), streaming apps, app store and more. The home page is also customisable and lets users select an additional tile with the app of their choice. Users can download number of third party apps from the App Store including a couple of personal favourites – Kodi and Spotify TV, which is a good addition now that Spotify is officially launched in India. The whole interface is pretty straight forward and easy to use and can be operated using the D-pad on the remote. 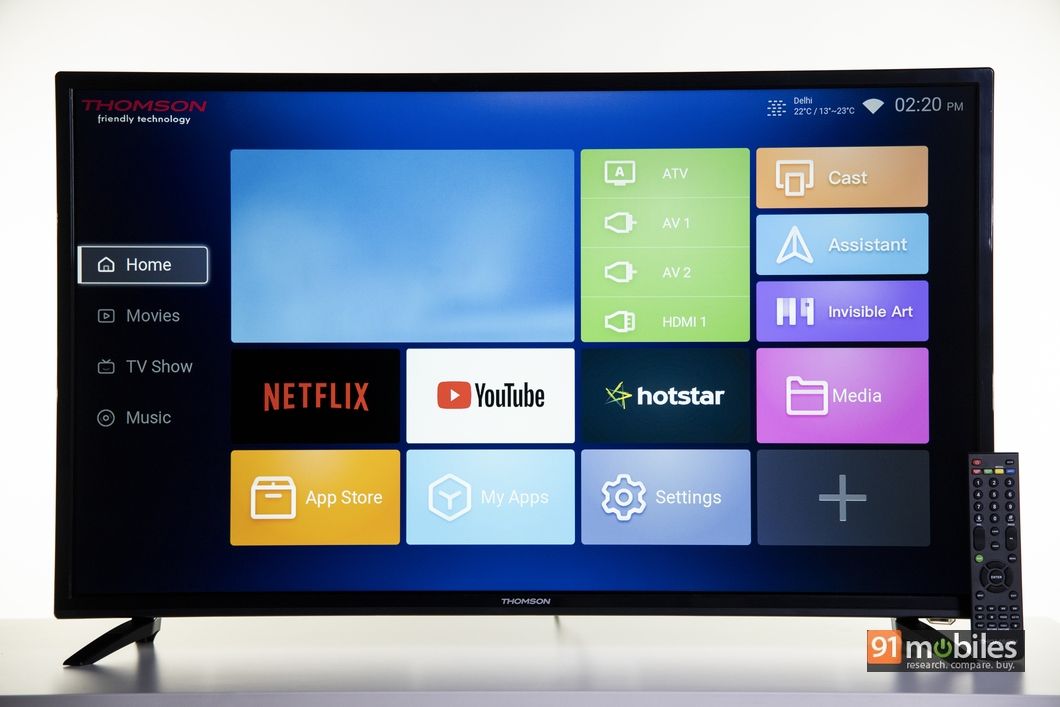 Speaking of the remote control, the one provided with Thomson UD9 Series 40 is a far cry from the sleek miniature ones provided by Xiaomi and more along the lines of the behemoth controllers provided with televisions of yesteryear. It could be a bane or boon considering how you use the TV, if you are more of a DTH user the remote will actually be useful with full controls and if you are going to just use streaming apps etc then the D-pad is all you need. 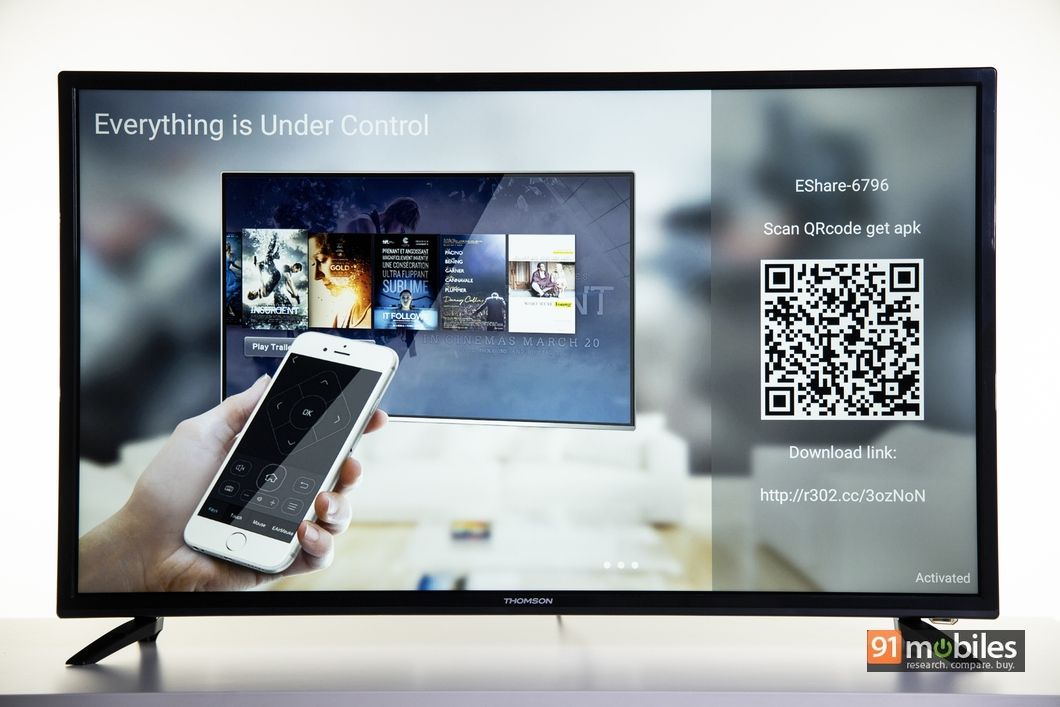 Thomson has also integrated a cast feature in the UD9 Series 40 TV, which prompt users to download the EShare app through a QR code. The app is designed to allow users to cast images, videos, music and documents on to the TV. Moreover, if your smartphone has an IR blaster, you can also use the app to control the TV, which I would have preferred more except for one little hiccup. While I was able to download the app without any issue and install it on my OnePlus 6 (review), the app failed to locate and subsequently connect to the smart TV no matter how many times I tried.

The Thomson UD 9 Series 40 has been priced at Rs 20,999 and as such is directly up against Vu Iconium 43-inch UHD LED smart TV, which is slightly more expensive than Thomson offering. However, you also get a more aesthetic metal chassis, slightly bigger display, and 20W Jumbo Box speakers with the VU offering. It all boils down to whether aesthetics and audio matters more to you or you would rather save the extra bucks, Rs 4,000 to be precise.