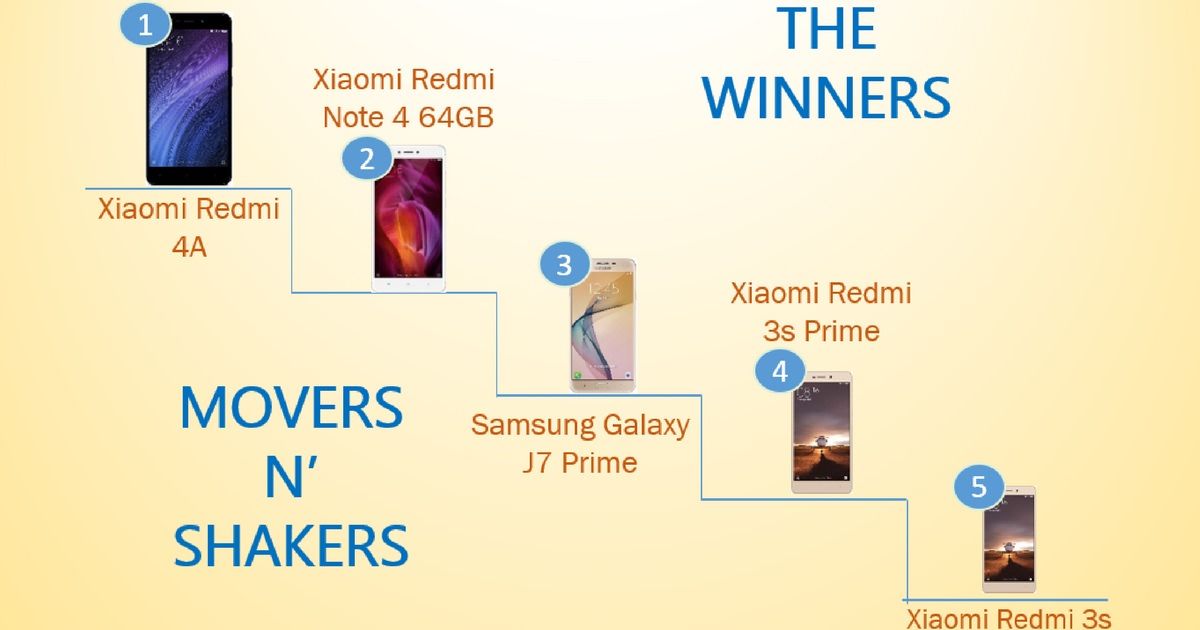 The mobile phone market in India is undergoing a transformation and seems to be on the crossroads in some aspects. Consumers are moving from feature phones to smartphones and at the same time, manufacturers are offering 4G VoLTE-capable devices in the entry-level. Similarly, more and more phones are selling online, yet brands like Vivo and OPPO are garnering massive sales volumes with their retail-centric approach. And, in the middle of all this is 91mobiles, where every month, millions of users search for their next potential purchases. While their searches don’t necessarily convert into sales of the respective devices, the search data does indicate the ever-changing consumer sentiment. So which smartphones were on top of the users’ minds in the month of April? Let’s find out.

Rarely it happens that the first three smartphones are able to maintain their positions in the top 20 list, but that’s exactly what happened last month. Xiaomi’s budget offerings, the Redmi 4A (review) and Redmi Note 4 (review) held their first and second spots respectively, followed by Samsung’s Galaxy J7 Prime (first impressions). What’s interesting is that the fourth and fifth places are also in the grasp of the offerings from the Apple of China, with both the variants of the Redmi 3S (review) having jumped one position each.

Similar to the table-toppers, the entire list of top 20 mobile phones doesn’t hold much surprises. Most handsets have been able to hold on to their places in the coveted chart. Some positions have shuffled though, so here’s the complete list with the change in the respective rankings of the phones along with their month of launch in India. 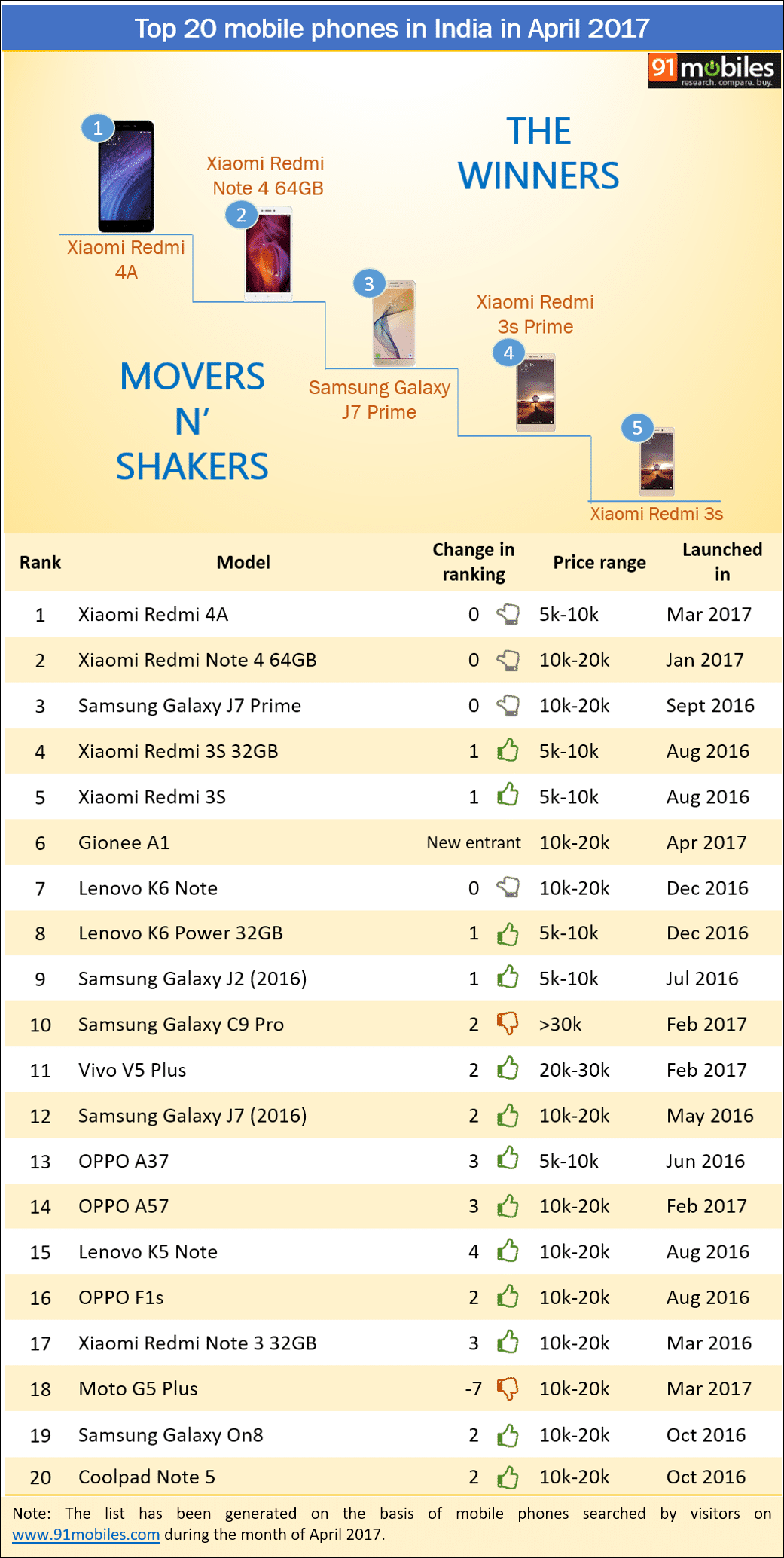 Alia Bhatt’s anthem for selfie lovers – #Selfiestan appears to have drawn the consumer’s attention towards the Gionee A1 (review). The mid-range phablet not only focusses on the selfie capabilities with its 16-meg front-facing snapper, but also boasts an impressive set of specs, including a 5.5-inch FHD display, MediaTek’s Helio P10 processor and 4GB RAM. The hardware is backed by a powerful 4,000mAh battery. Samsung’s top-notch smartphone in the On series, the On8 seems to have revived the interest of buyers. The 5.5-incher bears a resolution of 1,920 x 1,080 pixels, and is fuelled by an octa-core Exynos chipset, which is mated to 3 gigs of RAM. For imagery, it has a pair of 13MP camera at the back, and a 5MP selfie snapper. It sips juice from a 3,000mAh battery.

At the time of its launch, the Coolpad Note 5 (first impressions) was the most affordable smartphone with 4GB of RAM. While it hasn’t been able to retain that title, it still remains a compelling offering with its price tag of Rs 11,999. The smartphone sports a 5.5-inch display with a 1080p resolution, and draws power from an octa-core SoC. The device also offers good battery life, thanks to its 4,010mAh pack.

Is Samsung getting back on track? 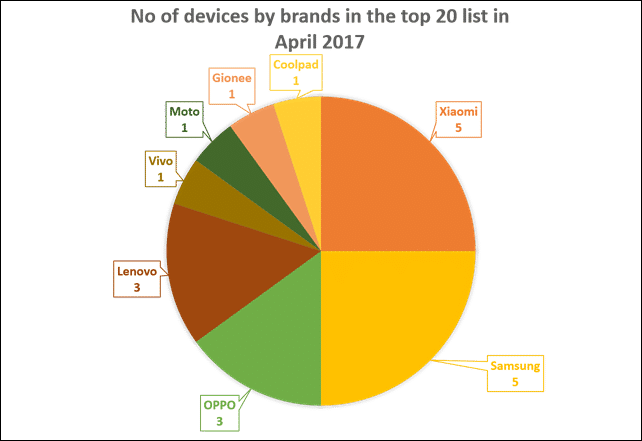 In terms of number of devices from brands present in the top 20 list, Xiaomi was able to topple Samsung from the first spot in the past few months. However, the Chaebol has been able to regain its top spot – sitting alongside the Apple of China with five offerings each listed in the top 20 chart. With three devices each, OPPO and Lenovo follow closely. The other brands which find place in our chart have just one device each in the top 20.

3GB RAM (or above) is the new normal

There was a time when even a gigabyte of RAM was considered enough for smartphones. But not anymore. Phone makers are packing in as much as 6GB of RAM in their devices, and the best part is that the powerful flagships are ensuring that even the budget offerings now come stacked with 3GB of RAM or even more. Out of the 20 smartphones, as many as 15 models boast 3GB RAM, ensuring that multitasking and usage of heavy apps / games remain smooth.

So this was a look at the phones that rocked popularity charts in the month of April. Be sure to check back again to see how the rankings change in May.