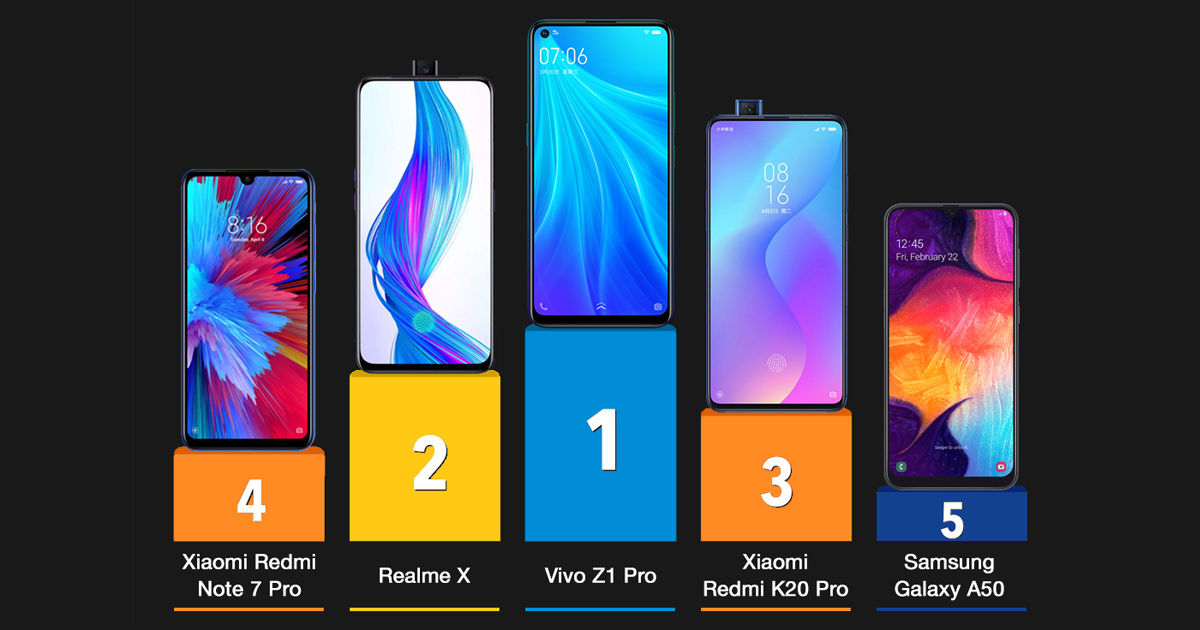 One of the biggest surprises in the recent smartphone shipments reports for Q2 2019 is the rapid ascension of Realme. The company which started as an offspring of OPPO just about a year ago (in May 2018) has not only joined the league table of the top 5 phone brands in India as per shipments, but also broken into the list of top 10 handset makers globally. Of course, if you’d have been following our top 20 series, then this might come as a revelation, considering most offerings from Realme have ranked high on the popularity charts. And while popularity doesn’t necessarily convert to sales, it surely is a huge indicator of what consumers are looking for when they’re purchasing a new phone. So what did the month of July had in store? Well, that’s what we’re here to find out, so without further delay, let’s begin.

Who’d have thought a Vivo smartphone would be topping the top 20 charts? I certainly didn’t. But that’s exactly what happened in the month of July. Interestingly, even the second spot is being held by a new smartphone – the Realme X. And then we have got a usual suspect in the form of an offering from Redmi – but not the Note 7 Pro (review), which has slipped to fourth place. Instead, it’s the Redmi K20 Pro Rounding up the top 5 list is Samsung’s Galaxy A50 (review).

The shake-up didn’t just happen between the table-toppers. In fact, if you compare the top 20 mobile phones of July against the month of June, almost the entire list seems topsy-turvy, with most handsets slipping several places in terms of popularity. Take a dekko at the chart to see for yourself.

The Z1 Pro (review) made its debut at the top spot, and not without good reason. If you’ve taken a look at its spec sheet and our review, then it must be clear that Vivo’s handset ticks all the right boxes. From a large display to powerful processor, and from triple rear cameras to a long-lasting battery – the device has it all. 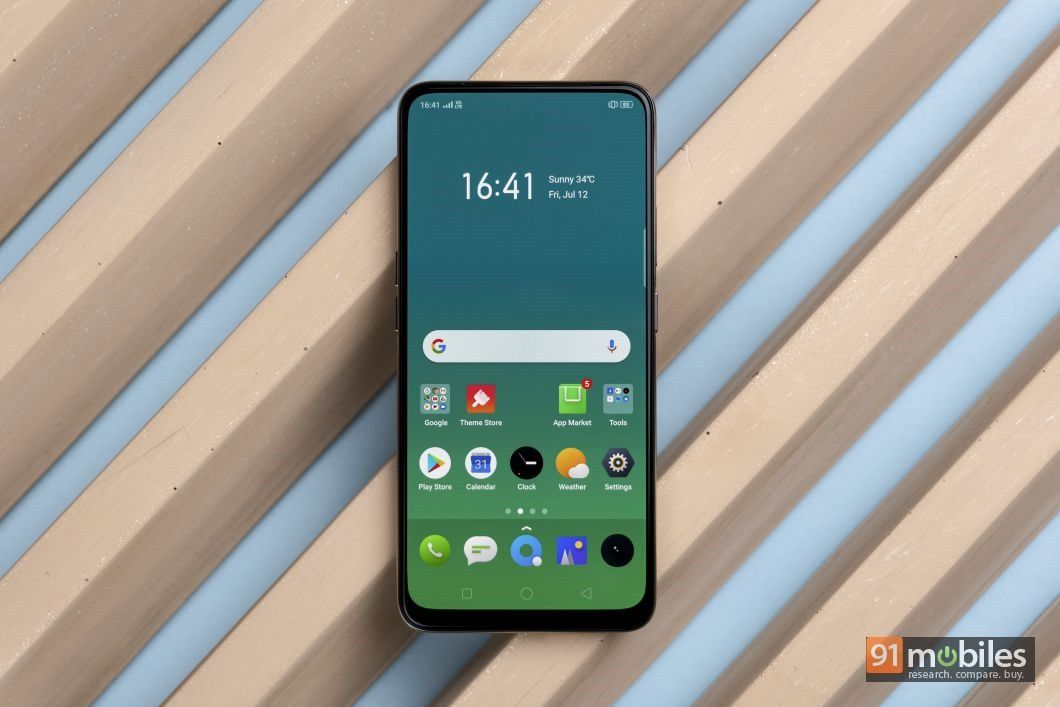 The Realme X (review) is the brand’s most expensive and loaded model yet, and offers a few tricks up its sleeve. That’s because it comes with a pop-up selfie camera, a trend which was restricted to the premium segment not-so-long ago. Then there’s a powerful 48MP Sony IMX 586 sensor at the back. It also offers a large 6.39-inch display, a snappy Snapdragon 710 processor and 3,765mAh battery with VOOC 3.0 support, making it an irresistible package.

The spiritual successor of the POCO F1 (review) comes with flagship-grade specifications while being priced below Rs 30k for the base model. The 6.39-incher ships with the top-of-the-line Snapdragon 855 processor which is accompanied by up to 8GB RAM. At the rear, the Redmi K20 Pro (review) features triple rear cameras with a primary 48MP shooter, while the front camera resides in the pop-up mechanism. 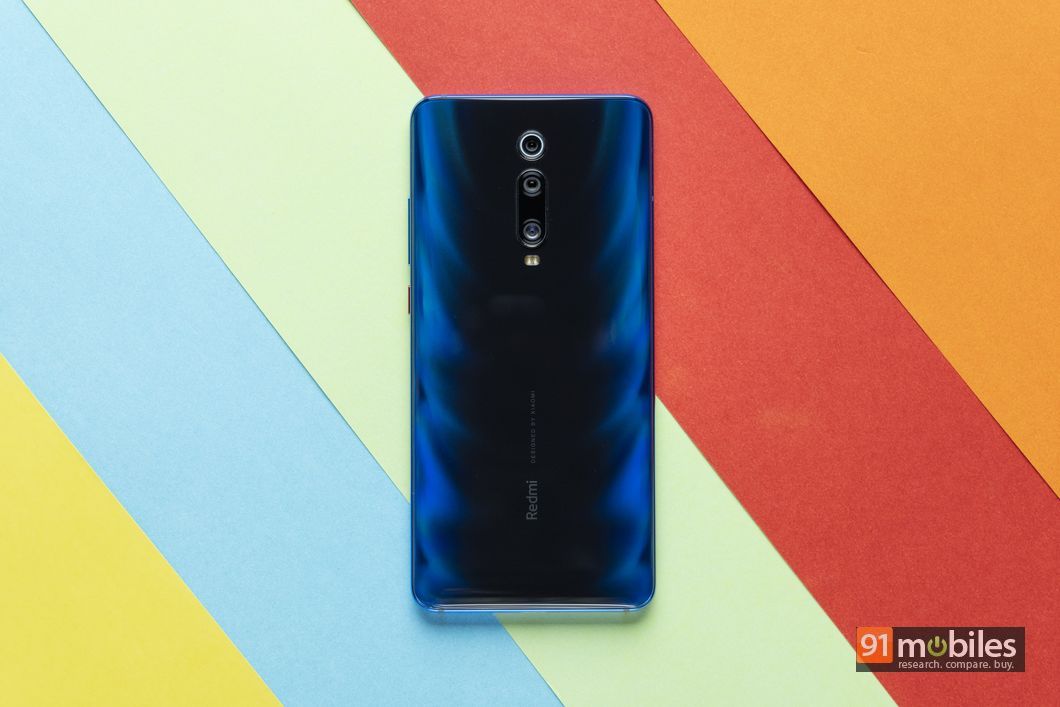 The affordable sibling of the K20 Pro, the Redmi K20 (review) shares almost all specs apart from the processor and slightly different sensor in the rear primary shooter. The K20 os the first phone in India to come equipped with Qualcomm’s Snapdragon 730 chip. Then there’s the use of IMX 582 sensor instead of IMX 586, with the only difference between the two is the fact that the latter supports 4k video recording at 60fps, while the former can record at 30fps.

As per Xiaomi, the Redmi ‘A’ series of entry-level smartphone have done really well in the market. And there’s no doubt that the latest Redmi 7A (first impressions) will carry forward the legacy as it offers a 5.45-inch HD+ display, Qualcomm’s Snapdragon 439 chipset, a 12MP Sony IMX 486 sensor on the back and a 5MP selfie shooter – all backed by a capable 4,000mAh battery. 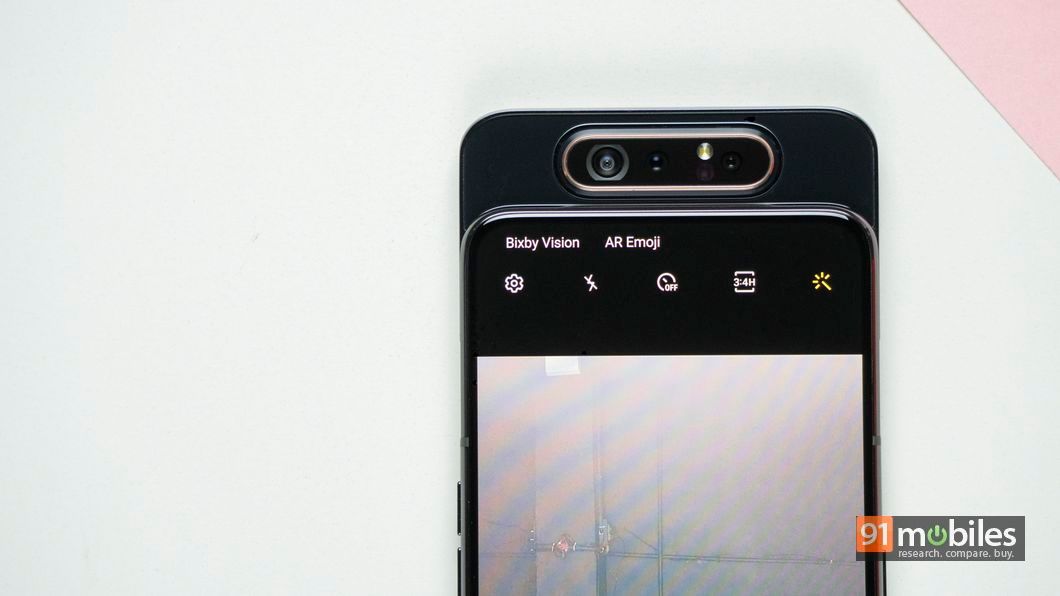 The Galaxy A80 (review) is the pinnacle of the A series, and comes with some unique features. The chief among them is its unique flip-and-rotate triple camera setup, which doubles up as a selfie snapper as well. The A80 is also the first smartphone in the world to pack in Snapdragon 730G SoC.

Xiaomi and Samsung continue their duopoly 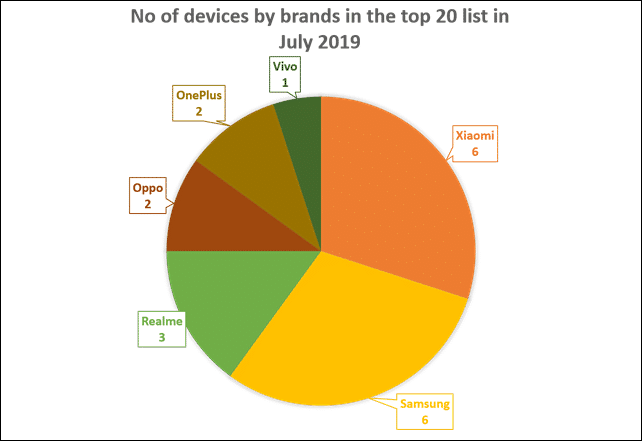 While in the previous months, both Xiaomi and Samsung have been almost neck to neck, in the month of July, both brands had the same number of devices in our top 20 list. The duo was followed by Realme, which has three smartphones among the top 20.

Considering the flagship season is set to start once again, with top-notch offerings from Samsung, Apple, Google and Huawei and others set to be launched, it’d certainly be interesting to track the top 20 mobile phones and see how things change in the coming months, so stay tuned.