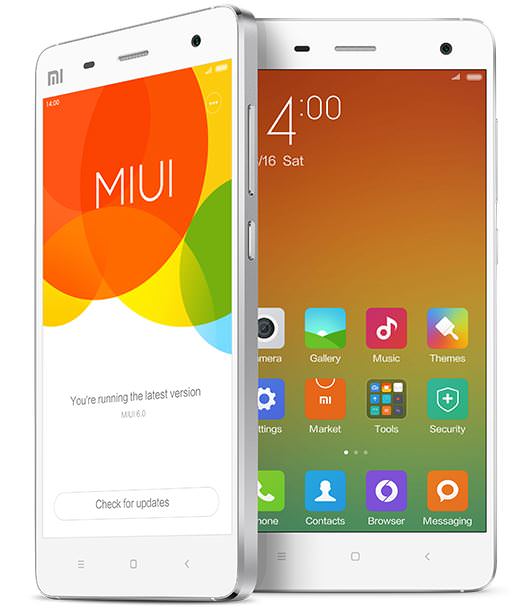 Xiaomi isn’t only known for offering brilliant pieces of hardware at jaw-dropping prices, but also for its custom firmware built on top of Android, christened MIUI. The MIUI firmware recently celebrated its fourth anniversary and has now hit version 6. However, MIUI 6 is currently in the beta-testing stage and will only be available for select Xiaomi smartphones such as the Mi 3 and Mi 4 (first impressions)  in October, while all the other devices from the brand’s portfolio and non-Xiaomi devices will get it in sometime next year.

The Chinese brand has already detailed the new features of the upcoming MIUI and some of them have evoked our interest. So going with the version number, we though it’d be fitting to list down the top six features of MIUI 6.

1. An all-new flatter and colourful interface

The 6th iteration of MIUI has been built from the ground up to keep in line with current design ethos in the mobile world. Xiaomi has dropped the skeuomorphism and gone ahead to embrace a flat interface, removing all the distractions so that users can always focus on the things they need. Needless to say that the Apple of China takes huge inspiration from Apple’s iOS in the interface department and MIUI 6 is no different. MIUI 6 has taken several pages from iOS 7 / 8’s notebook including translucent windows and even parallax effects in some cases.

Akin to iOS, MIUI 6 features vibrant colours with each  preloaded app having its own personality. Not only do these apps boast new and flatter icons, they also open up in an immersive mode. The system widgets have also been redesigned to keep up with the new interface. 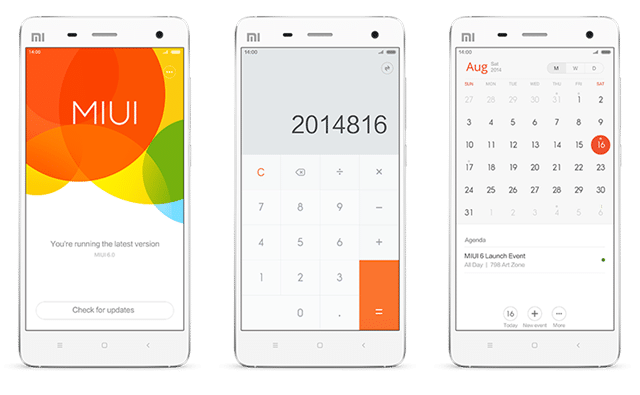 MIUI 6 is based on the current build of Android, i.e. 4.4 KitKat, but that doesn’t stop the firmware to offer some features from the upcoming Android version codenamed ‘L’. Amongst the most notable features of Android L release is the lock screen notifications and MIUI 6 also offers the same facility. Users also get the option to prioritise the notifications according to the importance. At first, users will only see a simple icon indicating the number of notifications, but with the help of a simple gesture, notifications can be expanded. Also, gone are the different icons in the lock screen, now you simply need to perform an upward swipe to unlock the smartphone, though you can still open the camera app by swiping right.

Notifications pertaining to an app will also be shown in the superscript of the particular app. You can customise the list of apps that should have this feature and you can also clear all the superscripts from the notification panel. 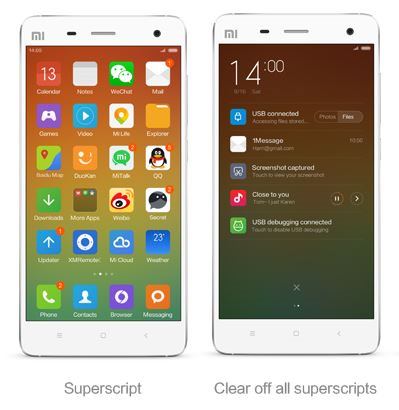 Users can view the notification panel with a downward swipe from any screen, including the lock screen. The panel is also influenced by iOS as it is now shows quick settings in a translucent interface. The music playback controls are also available in the quick settings menu.

3. The one place to do-it-all: the homescreen(s)

While the homescreen(s) will remain the unified place for viewing widgets and accessing apps in the next version of MIUI, there will be several subtle changes. Batch operations allow you to quickly organise all the apps and put them in a new screen or a folder easily. Another area where MIUI 6 is inspired by iOS is a global search operation which can be brought up from any screen with an upward swipe. 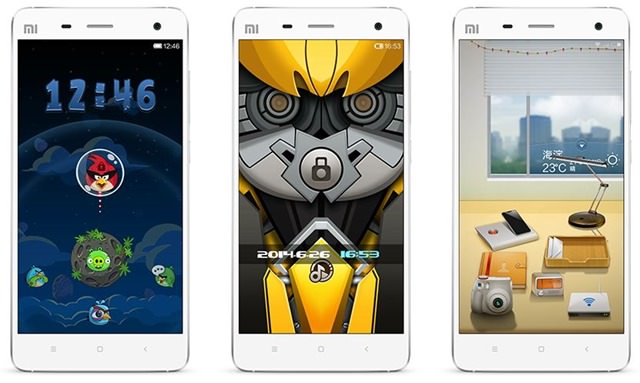 Themes is also one of the USPs of the MIUI ROM and the number of themes available in the store has now grown to an impressive count of 5,000. There’s also a new Mi Space interface in the homescreen providing a new way to interact with the device, rather than the usual grid-based layout.

The camera app has also got a UI makeover with a flat interface, though the options remain the same. One interesting and really thoughtful change is that the touch-to-focus button now offers a circular bar to manually adjust the exposure levels. 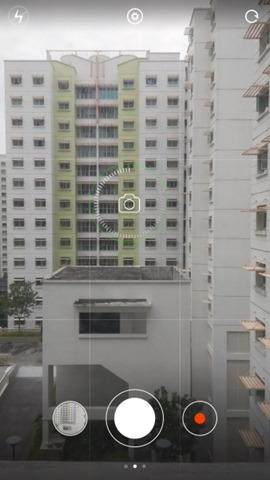 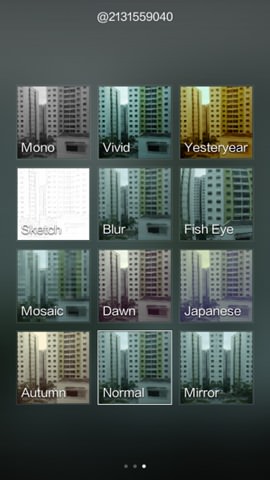 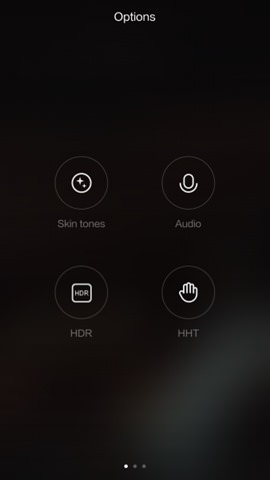 There’s also support for a variety of gestures. To switch between front and back cameras, you simply need to do a downward swipe, whereas swiping towards the left will open photo filters. Camera settings are accessible via a right swipe.

Privacy concerns aside, Mi Cloud is an extremely useful option to sync all your device settings, messages and pictures on the cloud, so they can be accessed anytime and anywhere. With the next version of MIUI, it’s set to be even more powerful with the ability to sync browser bookmarks (similar to Chrome’s Sync feature), sync songs on the music player and resuming your reading where you left off with the help of DuoKan Reader. 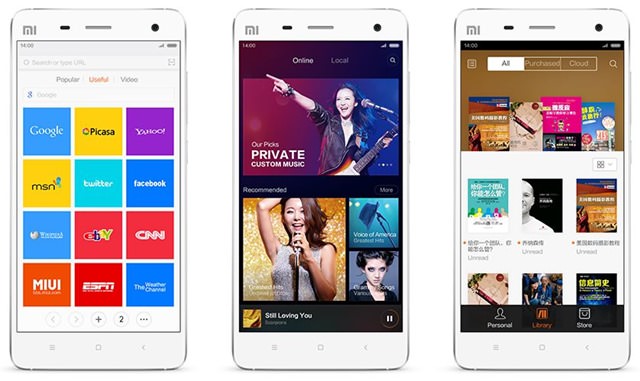 To improve the performance of mobile devices, MIUI 6 has included numerous Linux kernel and RAM optimisation techniques such as ZRAM, Smart CGroup and Bitmap Cache. 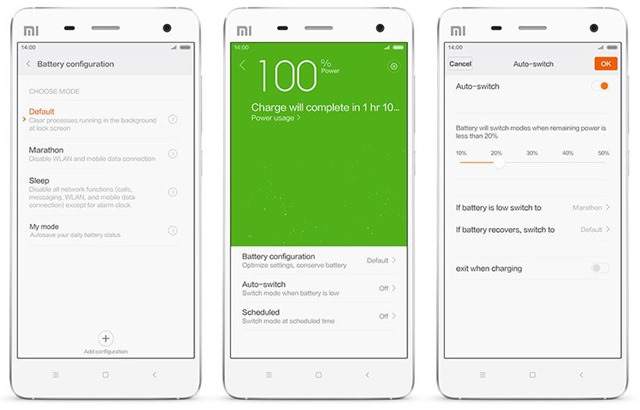 During our review of MIUI while trying out the Xiaomi Mi 3, we highlighted the security suite as one of its stronger points and now it has become even more powerful. There are now more power-saving modes to get more juice from your mobile’s battery. Other tools remain the same with the virus scanner from Kingsoft ensuring that there are no malicious files on the device, while the permission manager gives you control over what all the apps can access. Clean Master’ tool helps in freeing up the storage and data monitor lets you check what all apps are accessing your precious cellular data.

By no means the above list is a comprehensive assessment of MIUI 6, but the aforementioned points definitely make the upcoming refresh worth looking out for.

There are several other features which seem really interesting and useful. However, we aren’t sure if they’ll make their way out of Xiaomi’s home country China.

The phonebook is one of the most basic functionalities, yet it can do with smart upgrades and that’s what MIUI 6 offers. Xiaomi can record all the phone numbers in its servers and similar to Truecaller, users can mark unknown callers and classify different service numbers as banks, sales, etc. There’s also a new suite of life services apps which include Mi Life and MIUI Directory helping users find restaurants, purchase movie tickets, track packages and much more. 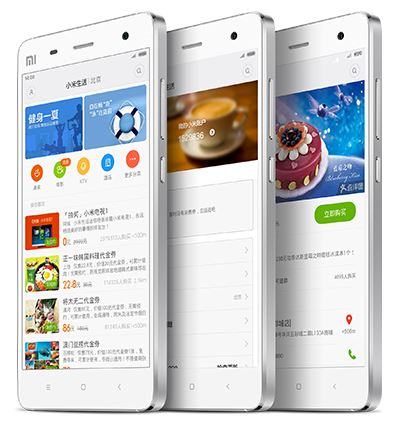 Following the button changes with the KitKat OS, the menu button now acts as a recent apps key. Moreover, if you prefer the recent apps in a card-style interface instead of MIUI’s icon-based interface, then you can do so by a simple pinch-to-zoom action.