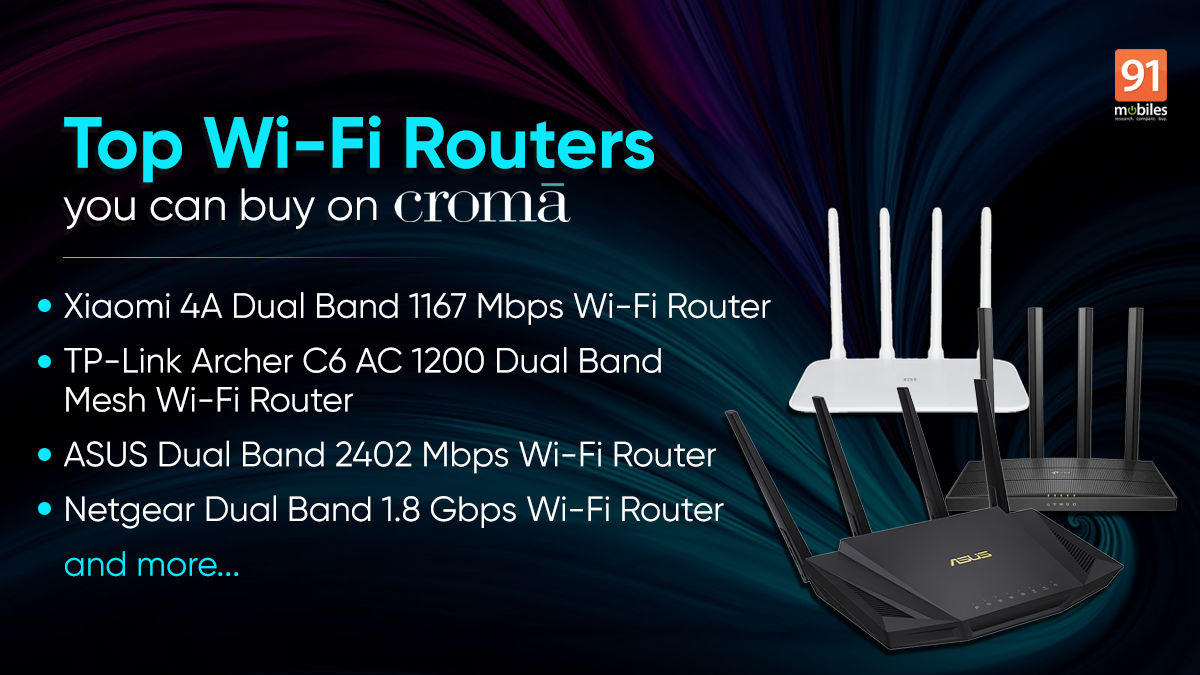 The days of connecting your laptop or PC to your dial-up modem are long gone. Smartphones ultimately rejected the idea of wired connections, and hence Wi-Fi has become the default method for connecting to the Internet without the hassles of wires. Most of us have access to Wi-Fi at our homes, workplaces, coffee shops, etc. In some cities, you can even use Wi-Fi aboard the metro service. But what should you know before ensuring that you get a seamless Wi-Fi experience at your home? What are things you should keep in mind before purchasing a Wi-Fi router?

A new router can be challenging to select because there are so many different brands and types in the market. Here’s a list of things to consider when buying a Wi-Fi router to help narrow your search. Moreover, we have compiled a list of top Wi-Fi routers you can buy on Croma.

Things to consider before buying a Wi-Fi router

The Xiaomi 4A Dual Band Wi-Fi router is an affordable-yet-powerful option. It flaunts four high-gain omnidirectional external antennas with Gigabit ports and dual-band support with speeds of up to 1,167Mbps. The router can be controlled using the Mi Wi-Fi app which offers remote control and a wide range of features, including security. It features one Ethernet input port, and two Ethernet output ports. Under the hood, it packs a 0.88GHz dual-core processor, 128MB RAM, and 16MB ROM.

One of the most powerful offerings from TP-Link, this Wi-Fi router is designed to offer 10x faster wireless internet speeds. It’s ideal for gaming hubs, multi-device HD video streaming, video calling, web surfing, and more. It has four antennas and MU-MIMO technology to enable multiple devices to send data simultaneously. The other router features include dual-band support, four LAN ports, one WANB port, the ability to set up guest networks, and a one-touch setting. It ships with a dual-core processor and support for the Tether app for managing it.

The Taiwanese brand ASUS is known for powerful laptops. But it also has a range of Wi-Fi routers that vary from affordable to high-end premium models. This is a top-of-the-line offering from the brand that boasts an impressive set of features. The RT-AX3000 is a four-antenna Wi-Fi router with support for blazing fast Wi-Fi 6 standard. It’s equipped to handle multi-device connections easily and features AI protection pro for enhanced security as well. You also get ample LAN ports and a WAN port along with a USB 3.0 port. Pick this one up if your requirements are fast speeds with top-notch security.

The TP-Link AC1200 Dual Band Wireless Router is ideal for multi-device connections, web surfing, gaming, emailing, video calling, and more. The router supports dual bands, including 2.4 GHz band (300 Mbps) and 5 GHz band (867 Mbps). It comes with four antennas to offer seamless coverage over a wider area. Additionally, this TP-Link router features IPv6 protocol for security and the next-generation Wi-Fi standard – 802.11ac that supports speeds of up to 1.2Gbps. It also comes with five Ethernet output ports. Thanks to the Tether app, you can access and manage the router on Android or iOS devices.

D-Link is one of the reputed names in the Wi-Fi router market, with an extensive line-up to its credit. This model has a dual-core processor to offer fast surfing and gaming capabilities. It features a dual-band support and three Gigabit LAN ports for providing high-speed internet connectivity of up to 2,600Mbps. The four-antenna router offers easy setup with D-Link Wi-Fi mobile app. The router also supports Google Assistant and Alexa for voice support.

It is not a router per se but a Wi-Fi router range extender. If you have a router that doesn’t provide coverage everywhere in your house, you can extend the range using this Wi-Fi extender from TP-Link. It’s also a more cost-effective solution as compared to getting a new connection and a router. The range extender is specially designed to remove the Wi-Fi dead spots from your home, and is ideal for gaming, surfing, video calling, and so on. Its other features include easy plug-and-play, multi-device connectivity, 1 x Ethernet port, and 1 x USB port.

The Netgear Dual Band 1.8Gbps Wi-Fi Router is perfect for enjoying high-speed Internet. It features Wi-Fi 6 support and WPA2 and WPA3 wireless security protocols. There are 4 Wi-Fi streams, which ensures a reliable and speedy connection over multiple devices. The router promises smooth functionality, thanks to a quad-core processor humming inside at 1.5GHz. You also get features like Netgear Armor multi-layer security software, Guest Wi-Fi, DoS, Firewall, VPN, and support for Amazon Alexa and Google Assistant, among others. As far as I/O is concerned, there’s one Ethernet input port and four Ethernet output ports.

We hope that you are now better equipped with knowledge of routers than you were at the start of this article. If not, pick the Wi-Fi router that best serves your purpose from the list and browse away on the superfast internet speed you just got.