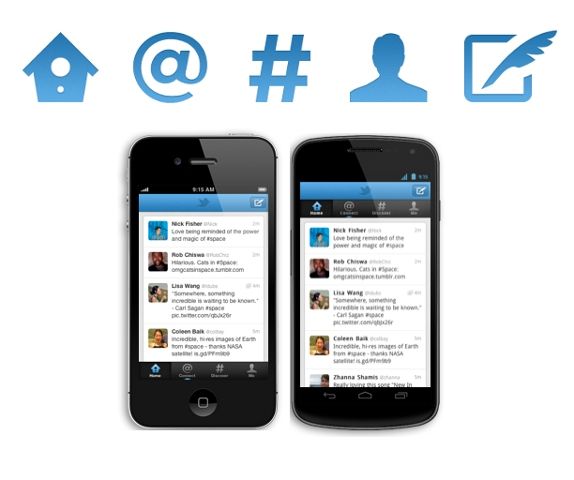 Hurray !!! Now, Twitter appears in a cool design with new features added. Twitter for Android devices and iPhone has been update to version 3.0 and 4.0 simultaneously. Now, users can view all their tweets in the new home tab and search for tweets in discover tab. Also, the improved version gives an access to view stories and trends in the discover tab.

Twitter is highly popularized social networking and typically a micro blogging service. The service rapidly gained worldwide popularity, with over 300 million users as of 2011, generating over 300 million tweets and handling over 1.6 billion search queries per day. Twitter has a user base including Movie stars, sports personalities, famous personalities and even for that matter of fact, politicians send their tweets. Coming back to the improved version, there is ME tab which allows to users to view all their tweets, followers, following lists, DMs and saved searches. The new improved Twitter for Android version brings the highly anticipated Twitter Photo sharing option, Trends which are already available with iOS devices. Users can now download the newly improved version of Twitter for Android click here and iPhone click here. The new redesigned version of Twitter for iPad will be soon available at App store.