Vi (Vodafone Idea) has introduced a new Rs 449 prepaid plan in India and it comes bundled with a bunch of benefits such as a free Zee5 subscription, a whopping 4GB of data per day instead of 2GB daily data, and unlimited calling to any network. The new prepaid plan could be a move to lure and retain its existing customers as the telecom network is promoting the plan as a banner ad in the Vi application. The Vi Rs 449 plan has a validity of 56 days and has other benefits like weekend data rollover, access to Vi Movies & TV app, and nighttime unlimited free data. The latest prepaid recharge pack is available for users across the country and can be recharged through the Vi website. 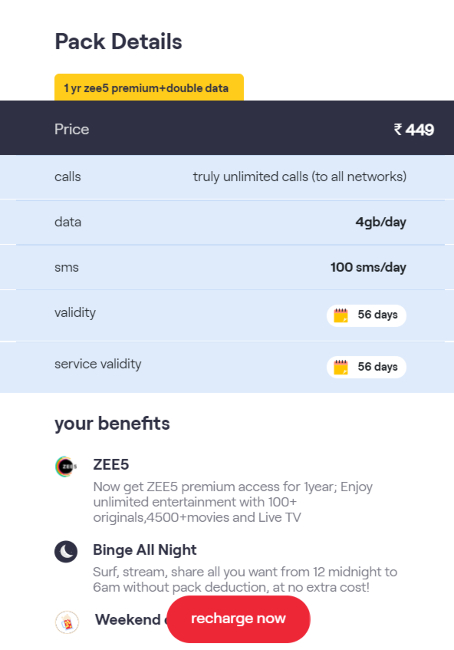 The Vi Rs 449, first spotted by Telecom Talk will offer 4GB daily data, 56 days validity, one year Zee5 subscription, access to Vi Movies & TV app, 100 SMS per day, and truly unlimited calls to any network. Other benefits include free night data (12 am to 6 am) and weekend data rollover. With 4GB daily data, this new Vi latest pre-paid plan becomes immediately lucrative to those who consume data constantly and should see good reception.

The new Vi Rs 449 prepaid recharge plan new plan comes just days after Kumar Mangalam Birla stepped down as the Non-Executive Director and Non-Executive Chairman of the Board. In a letter to Cabinet Secretary Rajiv Gauba, Birla said, “Without immediate active support from the government on the three issues by July, the financial situation of VIL will come to an “irretrievable point of collapse.” Interestingly, Birla has even extended to hand over his stake in VIL to the government.

Separately, Vi had recently launched the Rs 267 prepaid recharge plan that is accessible through its website and application. It offers 25GB of data, unlimited voice calls, 100 SMS per day, and a validity of 30 days. The plan also brings access to Vi Movies and TV as well. These new recharge plans hope to help Vodafone Idea amid severe financial issues.