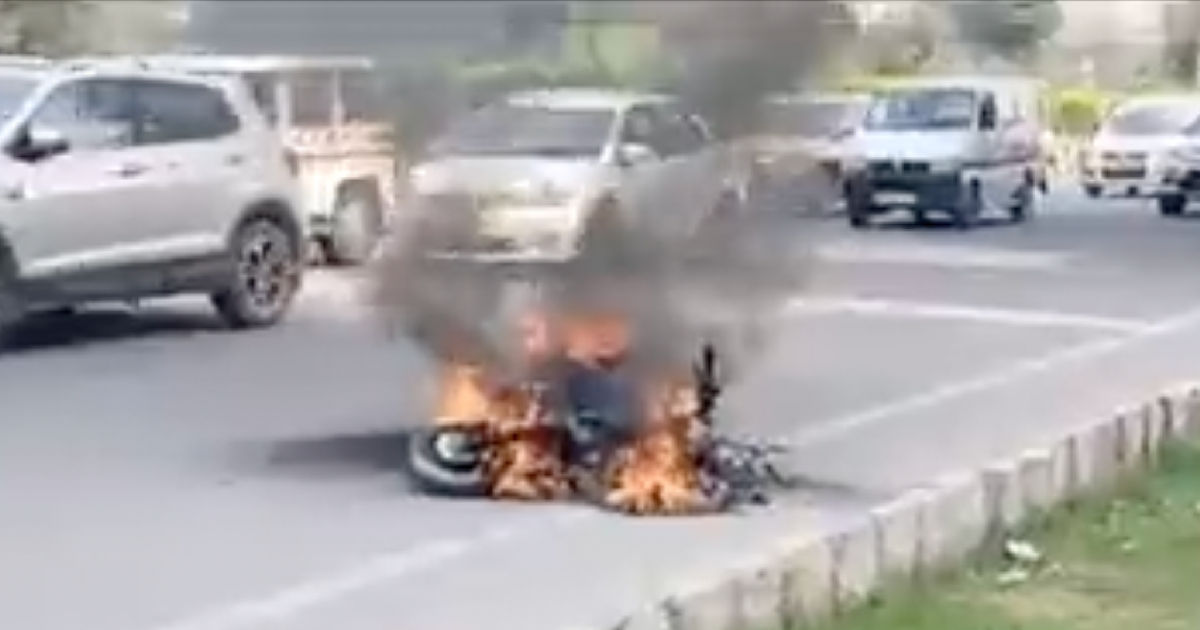 In a bizarre incident, an electric two-wheeler caught fire whilst in motion and the rider saved his life by jumping off the moving vehicle. The incident came to light via a tweet where the EV is seen in flames as it lies on the road. The mishap took place somewhere around the Sector 78 and Sector 79 localities in Noida. The make of the bike has not been revealed yet.

Fire hazards on electric two-wheelers seem to be a recurring event in India, and this is the second reported incident this week. An EV showroom in Andhra Pradesh earlier caught fire on Monday.

Another EV fire in India

A video that surfaced on Twitter showed an electric two-wheeler on fire while lying flat on the road. The incident was captured on a main road in Noida’s Sector 78 / Sector 79 locality. It has been reported that a delivery agent who works for grocery startup Big Basket noticed his electric two-wheeler bursting into flames mid-trip. Instinctively, the agent jumped off the moving two-wheeler to save himself from the fire.

The fire brigade came to take control of the situation and doused the fire. However, the electric two-wheeler was completely destroyed by the time the fire was fully extinguished.

In a recent incident, a seven-year-old boy from Vasi, Mumbai lost his life when a scooter burst into flames whilst charging. EV fires have been the cause of death of many lives and have caused considerable damage to property. The fires have been found to be more prone to electric wheelers. This becomes a pressing for a country like India, whose electrification journey will primarily be directed via electric two and three-wheelers, at its initial stages.

Ultraviolette F77 electric bike fitted with India's largest 2-wheeler EV battery, may do up to 307km on a single charge

The Government of India is working to enforce a standardised set of regulations and guidelines for manufacturers. The new regulations will prioritise the safety of buyers and aim to eliminate such fire hazards.