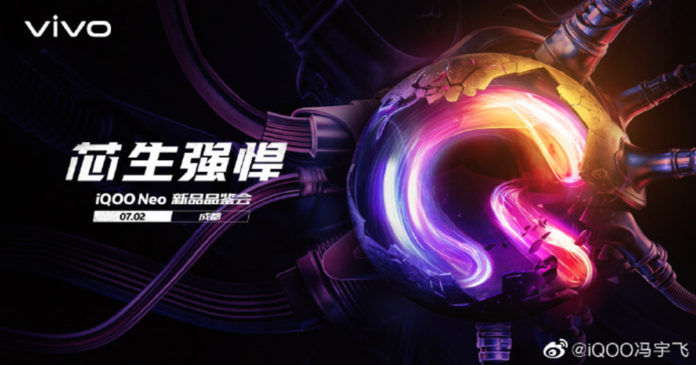 Vivo’s iQOO Neo is confirmed to be unveiled in China on July 2nd. The handset will have last year’s Snapdragon 845 SoC under the hood, pack triple rear cameras, and feature a waterdrop notch to accommodate the front-facing camera. Now, while we wait for the launch, in the latest teaser, the company confirmed the iQOO Neo would pack a 4,500mAh battery with 22.5W fast-charging support; to recall, the original iQOO supports charging with up to 44W speeds. The Vivo iQOO Neo is already listed on the company’s China website in black and purple colours and should offer a design similar to that of its predecessor. 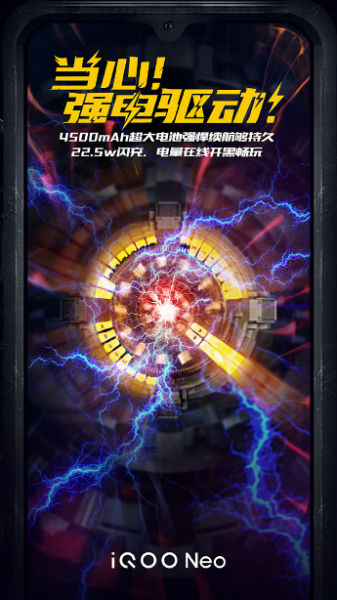 Previous teasers of the Vivo iQOO Neo highlighted the 4D Gaming Shock 2.0 feature  just like the regular iQOO variant and liquid cooling to dissipate the heat during gaming sessions. Since there is no cut-out for the fingerprint sensor on the rear panel, it could be embedded in the display. The TENAA listing revealed the handset will sport a 6.41-inch AMOLED display with full HD+ resolution and will run on Android 9.0 Pie with custom skin on top. The handset is also said to come with LED strip on the rear.

The Vivo iQOO Neo is already confirmed to have Qualcomm Snapdragon 845, instead of Snapdragon 855, positioning it in the mid-range segment. Given that iQOO was priced aggressively, we expect the Neo to follow the same trend. Since the launch is just a few days away, we should know more details then.