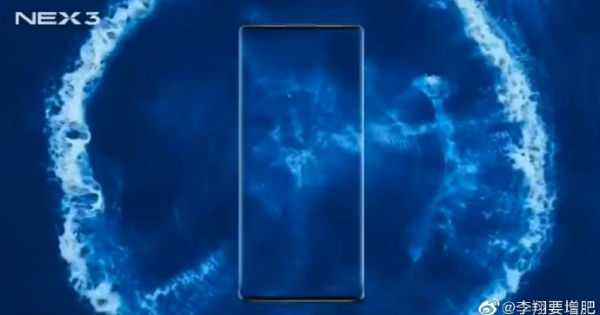 Vivo NEX 3 is scheduled to go official in China on September 16th, and the main highlight of the flagship is its immersive ‘Waterfall’ display that offers extremely slim bezels and curved edges. The handset is also said to feature around 99 percent screen-to-body ratio. Now, confirming the same, Vivo NEX product manager, Li Xiang, has said that the NEX 3 would offer a screen-to-body ratio of 99.6 percent and the same has been determined using the industry-standard calculation method.

Furthermore, the executive added the NEX 3 would offer the highest screen space with different methods as well and claimed that no other phone would offer such a high screen-to-body ratio in the next six-months. The new promotional render of the Vivo NEX 3 reveals truly edge-to-edge panel, while the upper and lower bezels are quite thin. It doesn’t come with physical buttons; instead, the flagship rocks pressure-sensitive buttons to adjust the volume, and there is a textured power button sandwiched in the middle.

As for the other specifications, the TENAA listing suggests the Vivo NEX 3 would sport a 6.89-inch AMOLED full HD+ display with 1,080 x 2,256 pixels resolution and a notch-less screen. It is powered by the Snapdragon 855 SoC coupled with up to 12GB RAM and 512GB storage that is not user expandable. The NEX 3 is likely runs on Android 9 Pie with a custom skin on top. In terms of optics, the Vivo NEX 3 features a triple rear camera setup consisting of a 64-megapixel primary sensor, a 13-megapixel secondary snapper and a 13-megapixel unit. On the front, it has a 16-megapixel unit for selfies and video chats. There is a 4,500mAh battery with either 44W or 120W fast charging support. We should know more details in the next few days.