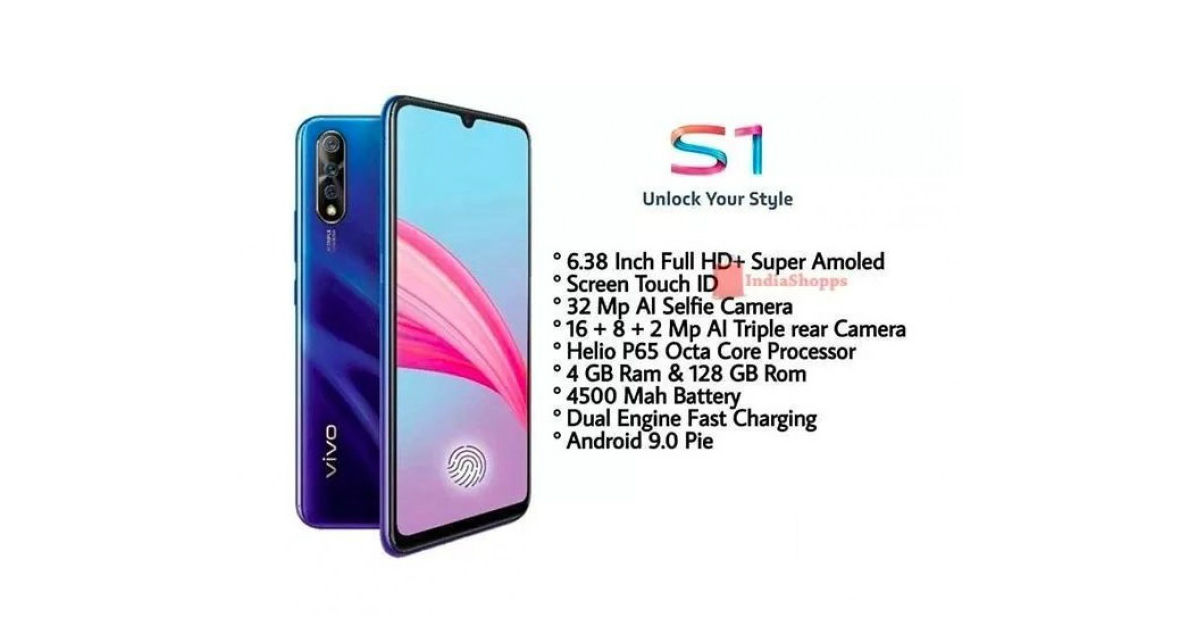 Vivo S1 specifications for the Indian market have been leaked online, thanks to a new leak. According to a report by India Shopps, the upcoming Vivo S1 will be powered by the 12nm octa-core Helio P65 SoC and will come with a 6.38-inch full-HD+ display with Super AMOLED panel, the leak shows. While we had known the smartphone would come with triple rear cameras, the report says the handset will come with 16MP primary sensor backed by 8MP and 2MP sensors. On the battery front, the smartphone will come with 4,500mAh battery with Dual Engine fast-charging support. These leaked Vivo S1 specifications add to what we already know about the handset.

We had exclusively leaked the first Vivo S1 teaser image for India earlier this week; the teaser image showed the smartphone will have vertically-stacked triple rear cameras, with a LED flash below the sensors. The same day, Vivo Indonesia had shared a teaser for the smartphone, saying it will come with a 32MP selfie camera housed in a waterdrop notch and Touch Screen ID in-display fingerprint sensor. The gradient colour scheme of the handset is visible in the leaked images.

Before this, we had reported the Vivo S1 will come with 128GB as standard and 6GB and 8GB RAM options. The India Shopps report also mentions that there will be an additional 4GB RAM variant as well. The Android 9 Pie-powered smartphone will reportedly be launching in India in August. In line with our previous report, the S1 is said to have a starting price of under Rs 20,000. According to our sources, the 6GB variant will be priced under Rs 20,000, while the 8GB option will cost less than Rs 25,000.

The Vivo S1 smartphone will be available in the offline market in India. It will be promoted as a style-centric device for the lifestyle conscious buyer. Also, it should be pointed out that the S1 smartphone in China is vastly different from the one headed to India and Indonesia.