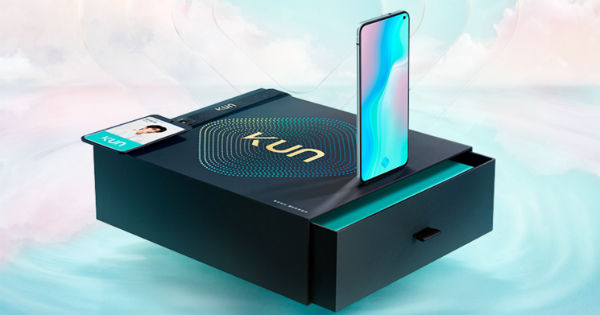 “Vivo S5 is expected to come with 6.44-inch AMOLED display, an in-display fingerprint sensor and a punch-hole design on the front”

Vivo S5 smartphone is scheduled to launch on November 14th in China. The handset seems to rock a new diamond-shaped camera module on the rear with a unique gradient design. A leaked promotional image from yesterday revealed the punch-hole design and ultra-slim bezels. Now, Vivo S5 with model number Vivo V1932A/T has appeared on TENAA alongside its key specifications. It measures 157.9 x 73.92 x 8.64mm dimensions and weighs 188 grams. Unfortunately, the images haven’t been updated yet, but they should go live in the next few days.

According to TENAA, the Vivo S5 flaunts a 6.44-inch full-HD+ AMOLED display with 2,400 X 1,080 pixels resolution and 20:9 aspect ratio. It is expected to be powered by the octa-core 2.3GHz processor, but the chipset name isn’t revealed. The phone packs 8GB RAM coupled with either 128GB or 256GB storage that is further expandable via microSD card. It is likely to boot Android 9.0 Pie with the company’s FunTouch OS skin on top. The Vivo V1932A/T aka Vivo S5 phone has a 32-megapixel front-facing camera.

While it was initially expected the Vivo S5 would pack quad-camera setup at the back, the TENAA listing suggests otherwise. The Vivo V1932A is said to pack Penta cameras with a 48-megapixel primary sensor, an 8-megapixel secondary shooter, a 5-megapixel third lens, a 2-megapixel quad camera and lastly a 5-megapixel Penta-lens. On the other hand, the Vivo V1932T variant has 48-megapixel + 8-megapixel + 5-megapixel triple camera system on its back. Since both the listings contradict the initial rumours, we will have to wait for images to be updated on the certification site.

A beefy 4,010mAh minimum capacity battery is said to fuel the handset. Vivo V1932A’s 3C certification revealed the handset will have support for 22.5W fast-charging. The Vivo S5 Cai Xukun Custom Gift Box Edition is already up for pre-orders in China and the listing reveals that the phone will be available starting November 22nd.