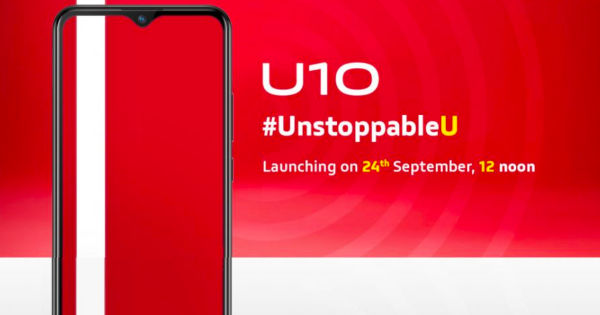 The Vivo U10 launch date has been confirmed by Amazon India listing. Vivo will unveil the handset at its event on September 24th in India. The upcoming Vivo U10 will be the first U-series smartphone from the brand in the country, and as per the listing, the phone will come with a halo-notch display, which isn’t entirely bezel-less, with selfie camera and 18W fast charging. The vendor claims that the tech offers 4.5 hours of usage with just 10 minutes of charge. We have already leaked the Vivo U10 price in India and have revealed the handset’s design through live images.

Vivo has been on a launch spree lately and the U series phone will be its third new lineup introduced in India in as many as months. Back in July, the company introduced Vivo Z1 Pro – its first online-exclusive Z-series phone. This was followed by the Vivo S1 smartphone last month, and now, Vivo U10 – which will be Amazon only across the country.

In addition to this, Vivo is also gearing up for its next-gen V-series smartphone launch in India on September 20th. The handset will be dubbed as Vivo V17 Pro and pack pop-up dual selfie camera, a first in the industry. The mid-range phone is also tipped to feature a 48-megapixel quad-camera setup at the back and 6.59-inch Super AMOLED Full-HD+ display. The screen will also bear the in-display fingerprint scanner. The Vivo V17 Pro will reportedly be powered by Snapdragon 675 mobile platform paired with up to 8GB of RAM and 128GB onboard storage.

The Vivo V17 Pro is likely to come in at least two colour variants and a price tag of around Rs 30,000. Stay tuned to 91mobiles for all the updates.

Vivo U10 Price
View All
Vivo U10 Video
ShareTweetShare
Share