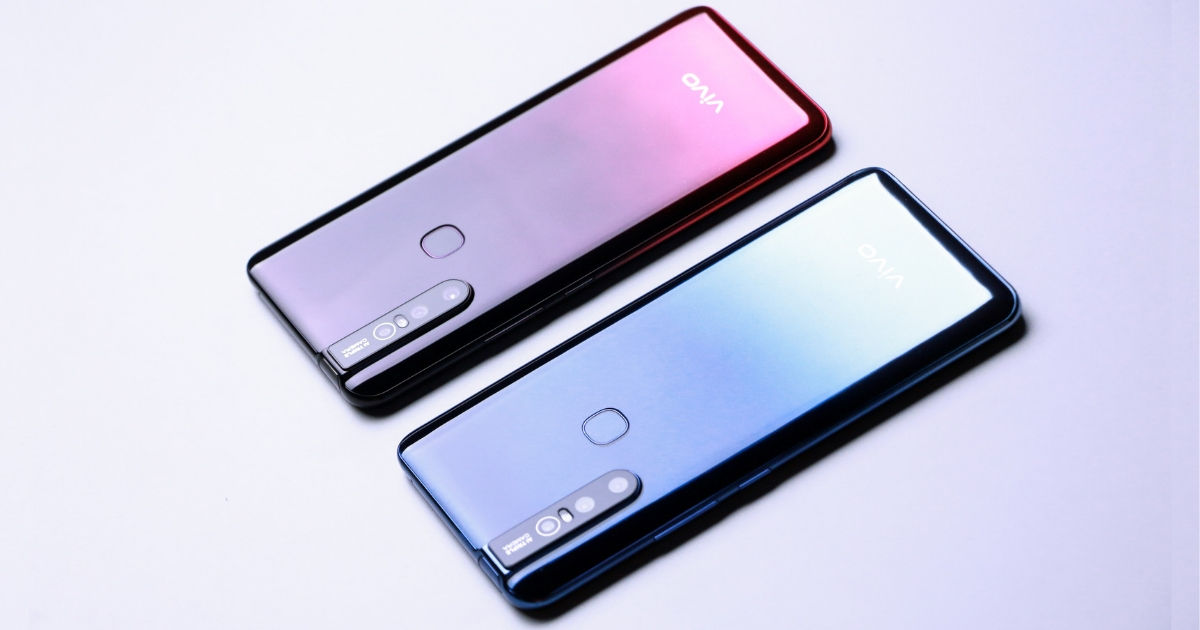 Vivo recently launched the V15 Pro (review) in India, which brings forth features from the Vivo NEX flagship, including a pop-up selfie camera, and an under-display fingerprint scanner in a mid-range price. However, with a price tag of Rs 28,990, the Vivo V15 Pro might be on a pricier side for many. Taking care of that aspect, the brand has launched the V15, a scaled-down variant of the Pro model that plays to the strength of its bigger sibling while still cutting some corners in terms of the hardware. So, how does the latest V series smartphone stacks up? We received the Glamour Red variant of the handset from the company, and here’s what I think of the phone after a brief stint with it. 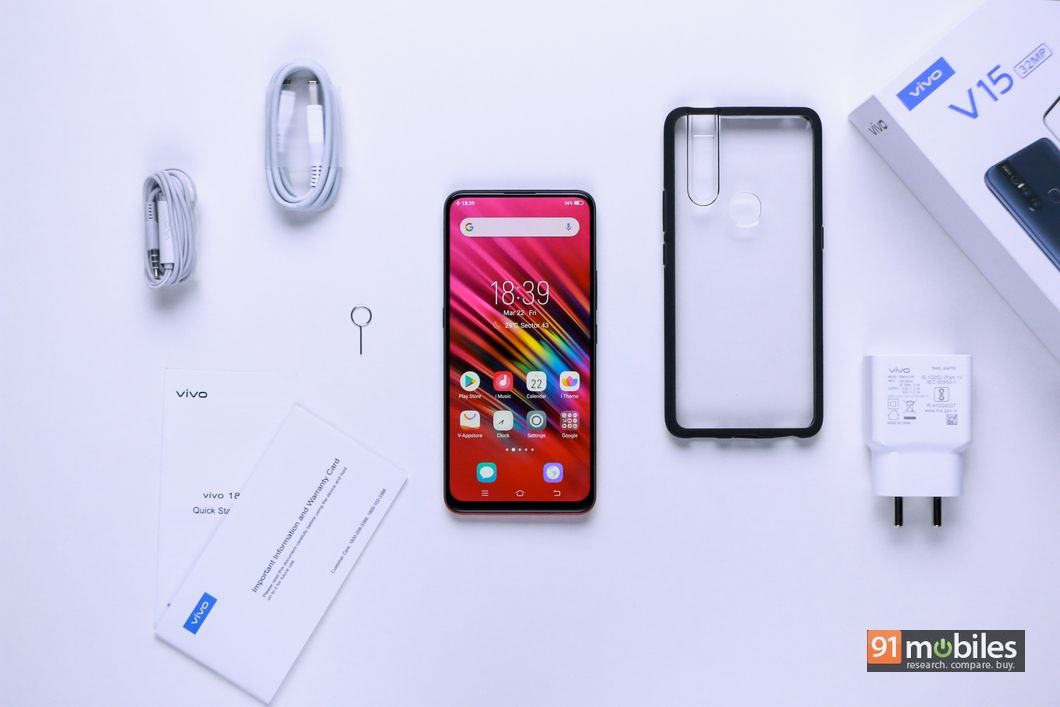 The Vivo V15 comes in the signature white box that brand is known for, with visuals of the phone and its name on top, minimal branding all around, and core specs listed at the bottom. As you open the lid of the box, you will find a white sheath containing the documentation and the unique bumper case with a transparent back as well as a SIM-ejector tool. The protective case is tailor-made for the Vivo V15 with a cut-out on the top for the selfie camera. Under that, you’ll find the Vivo V15 lying atop the wall charger, micro-USB cable, and a pair of in-ear headphones. 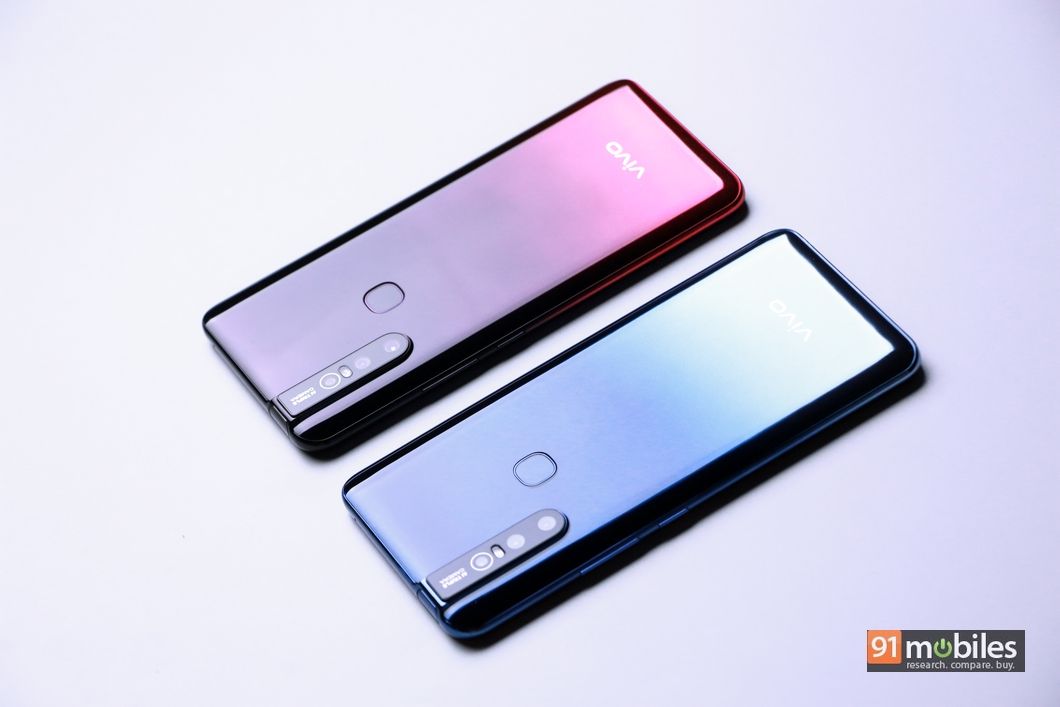 Coming to the design of Vivo V15, the company is offering the smartphone in three hues — Royal Blue, Black and Glamour Red in India. The Glamour Red variant of the V15 that we’ve got is a bonafide head-turner in my opinion. The form factor of the V15 is similar to the Pro variant with the same triple-camera module on the glossy back and a gradient hue. However, the company has replaced the cool mesh-like design from the V15 Pro with a sparkly pearl finish towards the bottom of the rear panel on the V15. The red hue on the back also overflows to the sides, maintaining a symmetry. Another difference in the design of both phones is the presence of the fingerprint scanner on the rear panel as the V15 misses out on the optical fingerprint sensor. As much as I want to like the in-display fingerprint scanner on V15 Pro, I cannot deny the fact that the rear-mounted authentication module on the V15 feels more natural and faster to me.

As for the buttons and port placements, you will find the volume and power button on the right spine, and a SIM tray along with a smart button on the left. The Vivo V15 can take two nano-SIMs along with featuring a dedicated microSD slot, which supports memory cards of up to 256GB capacity. At the bottom you will find the 3.5mm audio socket, loudspeaker grille and a micro-USB port. Personally speaking, sticking to micro-USB port on its mid-range smartphones in 2019 is a bummer. The aforementioned smart button can be configured to launch Google Assistant, Image Recogniser (identify what’s on your screen) and Google Search. Users can assign these tasks to single click, double click and long press. Then again, I personally didn’t like the fact that while the button can be mapped, the software doesn’t let you assign any third-party apps or other tasks to the button. 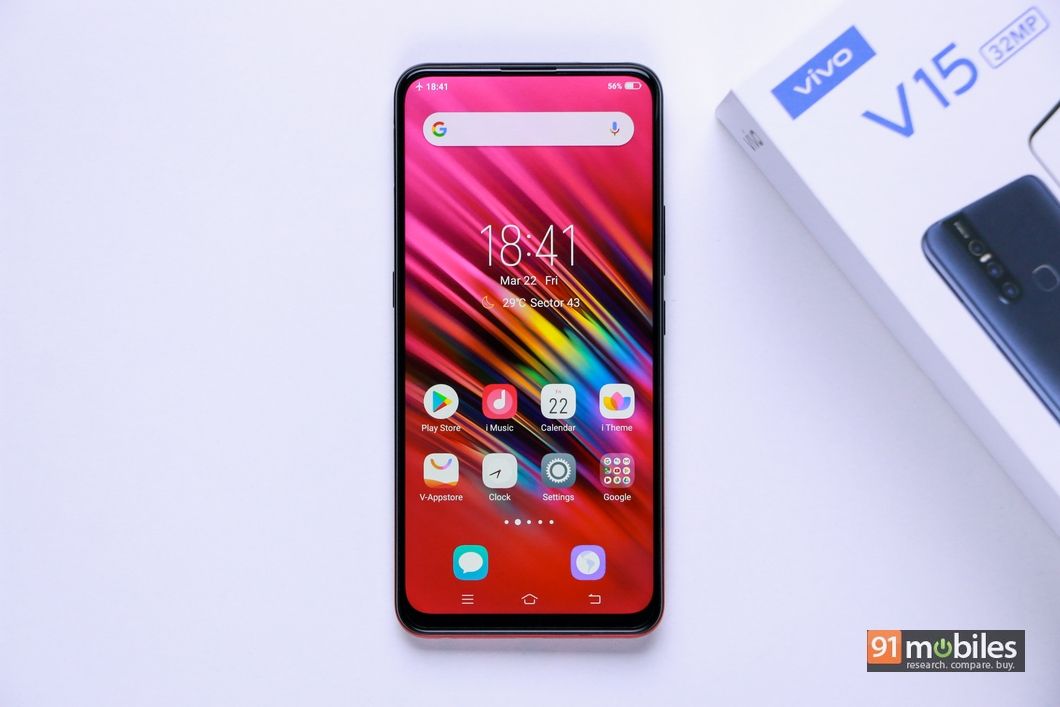 Coming to the fascia, just like the Vivo V15 Pro, the V15 also sports a 19.5:9 FHD+ Ultra FullView display, with 91.64 percent screen-to-body ratio and Corning Gorilla Glass 5 protection. Interestingly, the newer smartphone gets a slightly bigger 6.53-inch panel as compared to 6.39-inch on the Pro model. However, the trade-off here is that the V15 comes with an LCD screen as compared to AMOLED panel on the pricier sibling. While the screen is not as impressive as the one on V15 Pro, the colours are still punchy and viewing angles are quite impressive with next-to-none colour shift. The screen also gets bright enough in direct sunlight to be legible. Additionally, Vivo has equipped the V15 with display features like eye protection, colour temperature adjustment and ability to control third-party app display ratio. 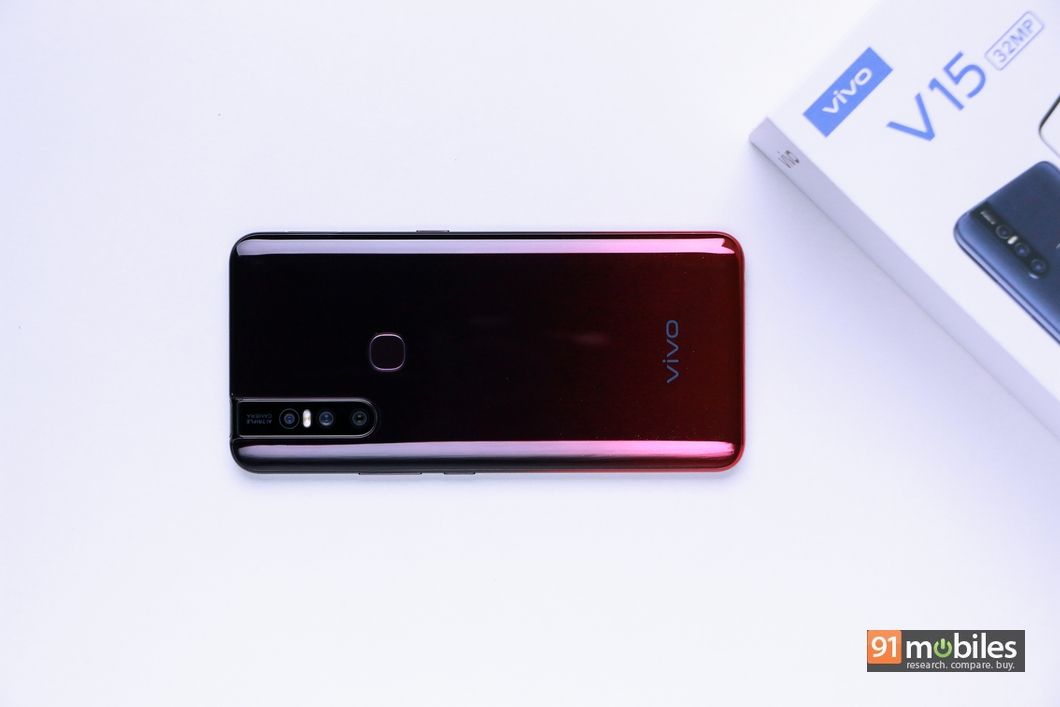 The display panel isn’t the only aspect where Vivo has cut corners in the standard variant. You also get a MediaTek Helio P70 SoC ticking at the core instead of the Qualcomm Snapdragon 675 SoC that powers the Pro variant. The processor is further backed by 6GB RAM and 64GB storage, of which 51.4GB is available to the user. In my short stint with the device, I played Soccer Hero, streamed a couple of hours worth of YouTube Videos, catch up on my daily news feed using Chrome on Wi-Fi and more while seamlessly switching between apps. The performance is smooth and the animations offered by FunTouch OS are easy on eyes.

Interestingly, the V15 is powered by a 4,000mAh battery, which is slightly larger than V15 Pro’s 3,700mAh cell. Along with the Dual Engine fast charging and the 18W fast charger provided in the box, the handset will juice up pretty fast too. 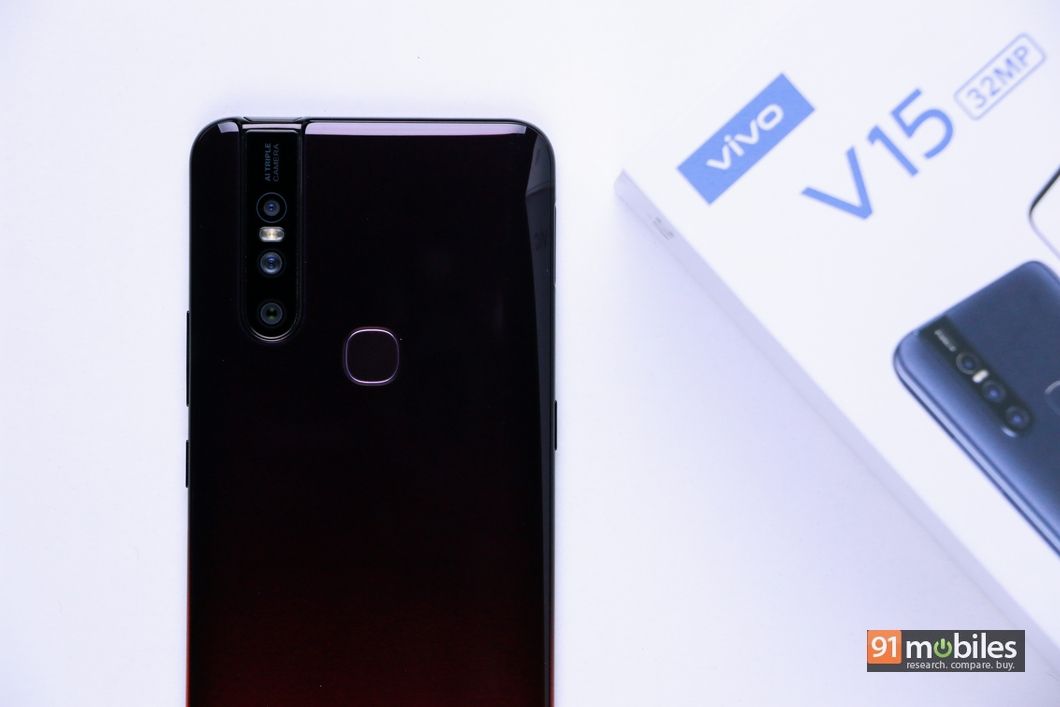 Speaking of the FunTouch OS, the proprietary drawer-less interface from the company is based on the latest Android 9 Pie and comes with a fair share of features and bloatware out of the box. You get third-party apps like Gaana, WhatsApp, UC Browser, Amazon India, Facebook and more preinstalled, all of which can thankfully be uninstalled. Uninstalling the apps are also pretty straight forward, as all you need to do is a long press on the icon and then tap on the ‘X’ icon. The software is also loaded to gills with features like Jovi assistant, Game Cube, Motorbike Mode, Smart Motion, Smart Split, App Clone, and more, all of which are self-explanatory. 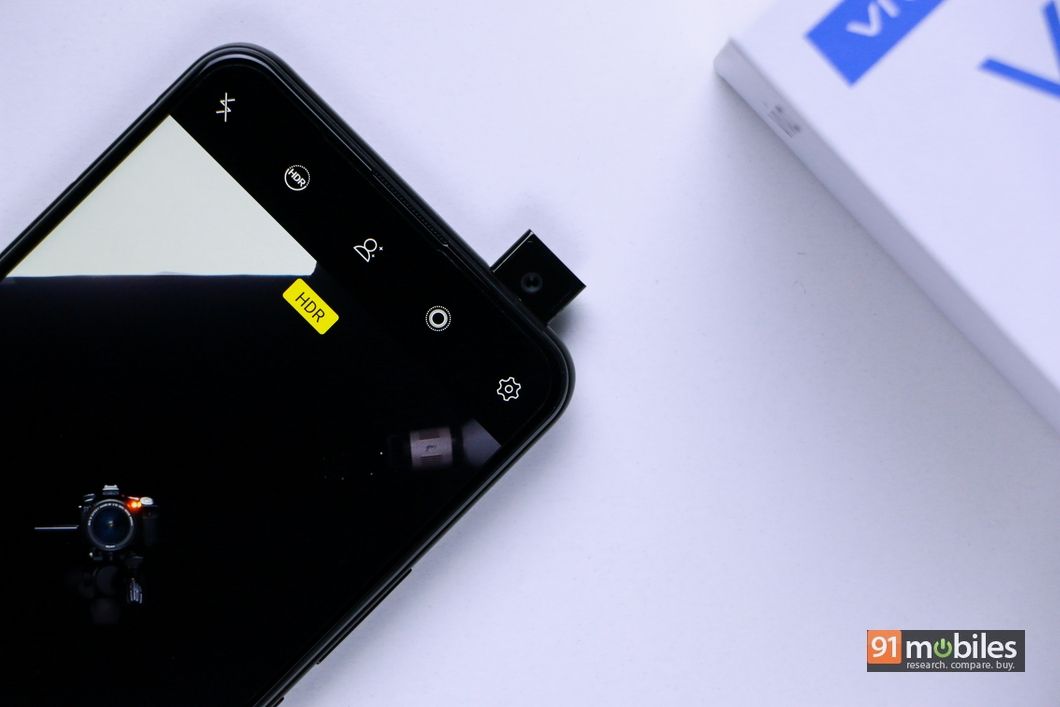 One of the biggest highlights of the V15 Pro was the impressive 32-megapixel selfie shooter housed in the self-elevating mechanism and playing to its strength, the brand has retained the selfie camera on the V15 as well. However, instead of a high-res 48-megapixel shooter on the rear panel, the affordable sibling sports a 12MP shooter with an f/1.78 aperture, which is coupled with an 8MP f/2.2 snapper, and a 5MP f/2.4 sensor.  The initial shots taken from the rear camera are impressive to say the least with a high level of details and accurate colour production. As for the selfie camera, I will say this, for a camera shy person I toggled the front camera on more times in this short stint with V15 than in all my life and not just to see the elevating camera in motion. The pictures taken using the 32-megapixel shooter is able to ensure the natural skin tone and good details to produce pleasing selfies. Clearly, this smartphone is for those who are obsessed with selfies. Vivo has equipped the camera app with features like HDR, AR Stickers, AI Beauty, Pro mode, AI Bokeh, Live Filters and more.

I have to hand it to Vivo, when it comes to the Indian smartphone market, the company has done its research. In our review of the Vivo V15 Pro, we observed that in the Rs 25k to 30k segment, the smartphone is, “an affordable alternative to flagships like the Honor View 20 (review), and a more enticing option than the POCO F1 (review) and Nokia 8.1 (review).” Now, with the launch of V15, the brand has launched a solid option in the sub-Rs 25k category as well.