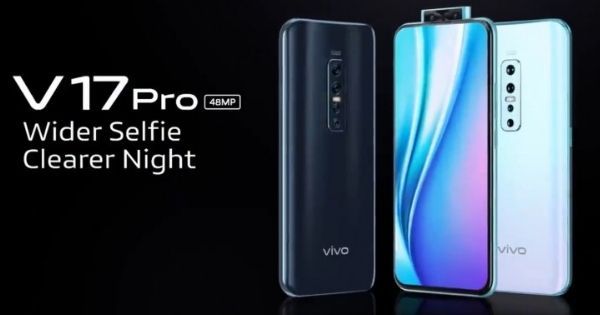 Vivo’s upcoming mid-range smartphone, the V17 Pro, has leaked online again. An official promo video for the smartphone has emerged online, which showcases the phone from all angles. It also shows some of the camera features of the Vivo V17 Pro and confirms that it will come with a quad rear camera setup. It also shows the dual pop-up camera setup, which will include a wide angle sensor. Earlier this week, we revealed that the Vivo V17 Pro would be the first to feature the dual-pop-up camera.

Apart from the leaked promo video, several camera samples from the phone have also been leaked. First, let’s take a look at the leaked video, which shows the back of the Vivo V17 Pro for the first time. From the video, the phone will feature a vertically aligned quad-camera setup at the back. The setup is placed at the centre of the top edge of the phone. The video also showcases the phone at the end in two colour variants, most likely a black/blue and white with gradient finish. It also includes the tagline ‘Wider Selfie, Clearer Night’.

The video also shows us the dual-pop-up selfie camera setup, which rises from the top center of the phone. The dual selfie cameras would include a primary 32-megapixel sensor along with an ultra-wide unit. At the back, the phone will feature a primary 48-megapixel camera with AI assist. The video also shows the Super Night Mode feature, which should help take clear and bright photos in low light.

Coming to the leaked camera samples, all of the shots seem to have been taken in collaboration with NatGeo Traveler India. All the sample photos include the hashtag #ClearAsReal. By the looks of it, the quad camera setup on the Vivo V17 Pro should be able to produce some really pleasing photos. We are not really sure when Vivo plans on announcing the new Vivo V17 Pro, but it should be available in India before Diwali. The phone will also feature an in-display fingerprint scanner, but other details aren’t known as of now.