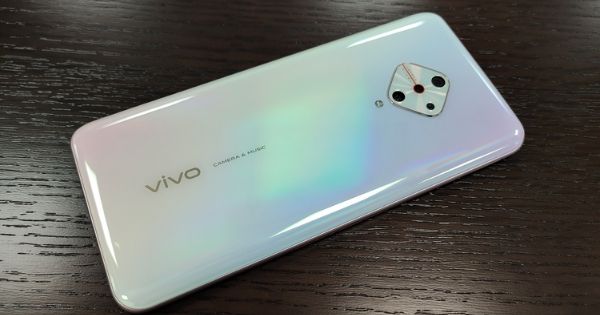 New live images of the Vivo V17 have surfaced online, revealing the rear camera setup along with other design aspects. We recently learnt that Vivo is planning to launch the new Vivo V17 smartphone in India later this month. Our source, who wishes to remain anonymous, says the Chinese manufacturer will discontinue the Vivo V17 Pro (review) and only sell the Vivo V17 variant in the country. Not a lot of information is available regarding the new device, apart from the quad-rear camera setup and a price tag around Rs 25,000.

The Vivo V17, from the leaked live images, appears to have a diamond shaped rear camera setup. Vivo is also set to launch the Vivo S5 smartphone, which will also feature a similar camera module at the back. However, both devices seem to have slightly different arrangement for the camera sensors. The live images show both the front and rear of the Vivo V17. On the front, the device appears to have a waterdrop notch and a noticeable chin at the bottom.

The right side of the phone has the power button and the volume keys. A USB Type-C port is available at the bottom of the device along with a speaker and microphone. The phone will have an in-display fingerprint scanner as there is no rear mounted scanner. Coming to the rear, the diamond shaped camera module is seen to house four camera sensors in total. The flash is placed below the module.

We do not have information regarding all the camera sensors, but the report says one of them will be a 48-megapixel unit. The website that leaked the images also states that the phone will have 8GB RAM and 128GB storage. A 4,500mAh battery is said to power the smartphone. Recently, a new Vivo smartphone was certified by TENAA. This device was listed with a 6.38-inch AMOLED display with FHD+ resolution, a 4,500mAh battery, up to 8GB RAM, 256GB storage, and a quad-rear camera setup with a primary 48-megapixel sensor. This could be the upcoming Vivo V17 for all we know. We will have to wait a few more weeks to find out.