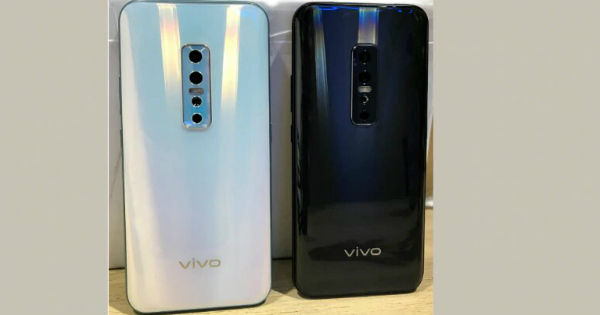 “This will be the first Vivo phone to come with four cameras on the back, but the sensor details aren’t revealed yet”

Vivo V17 series is all set to go official in India sometime in September. We have previously reported it will be the first smartphone lineup to feature two pop-up selfie camera modules. Now, weeks ahead of the launch, a live image of the Vivo V17 Pro has hit the internet, courtesy of India Today Tech. This reveals the vertically arranged quad-camera setup with LED flash and is also seen in two colours, each a shade of blue. One of them was seen in a promo video for Bigg Boss 13 (image below) earlier this week. In the new leaked image, we can see the Vivo V17 Pro will have quad rear cameras, which were the first to report. This will be the first Vivo phone to come with four cameras on the back, but the camera specifications are still a mystery.

The live Vivo V17 Pro image doesn’t show a rear-mounted fingerprint, so it should be placed under the display, like the one on its predecessor V15 Pro. However, the front design is currently under wraps, but with pop-up selfie design, we can expect an impressive screen-to-body ratio. It is likely to run on Android 9.0 Pie with FunTouch OS skin on top. Unfortunately, details regarding the screen size, battery capacity, RAM, and storage are scarce at the moment, but as we inch closer to the launch, we should learn more details. Given the Vivo’s pricing history, the V17 Pro should cost less than Rs 30,000. Lastly, the report says the smartphone will be launching before Diwali, which we had exclusively reported a month ago.

Separately, Vivo is gearing up to launch the Z1X mid-range phone in India on September 6th. The handset is confirmed to feature an in-display fingerprint sensor, an AMOLED display, powered by a Snapdragon chipset, USB Type-C port, and FlashCharge support. The company also confirmed the Z1X phone would be costlier than the Z1 Pro and that it will be available exclusively via Flipkart in India.