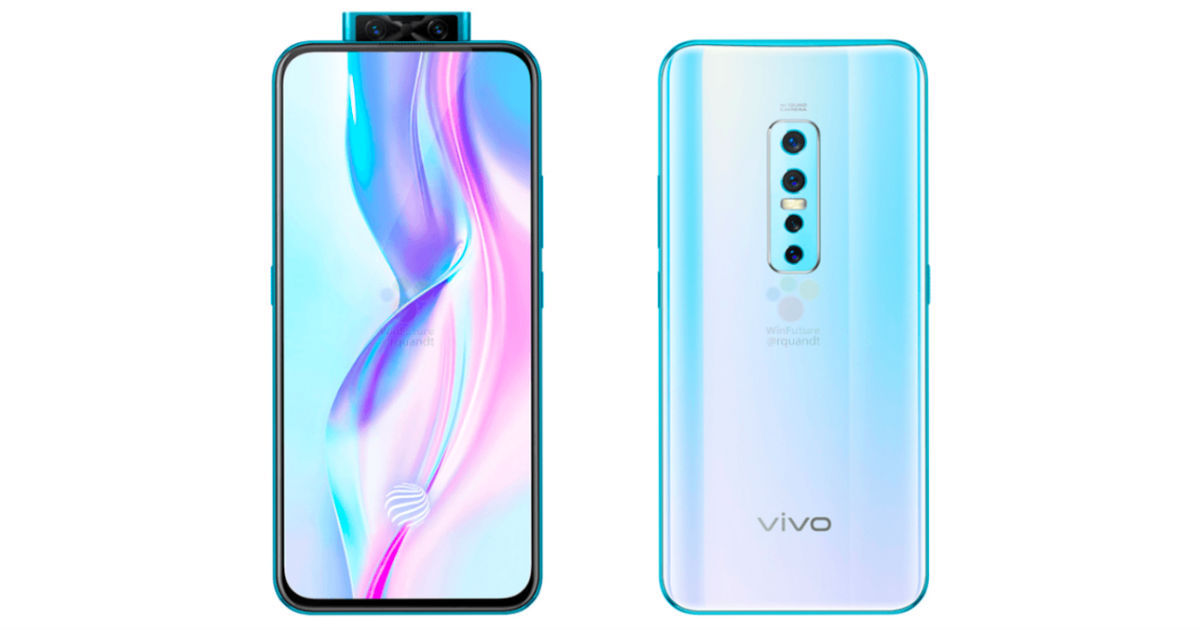 The Vivo V17 Pro smartphone, as you may know by now, is the upcoming V-series smartphone from the Chinese phonemaker. Live images, promotional posters and a video of this mid-range Vivo handset have been leaked online, ahead of its September-end release. Now, Vivo V17 Pro specifications and press renders have surfaced, revealing all the key details of the smartphone. The Vivo V17 Pro handset, which has a total of six cameras, will reportedly ship with a mid-range Qualcomm Snapdragon 600-series chipset, a truly bezel-less display, 48-megapixel main sensor, wide-angle selfie camera, and a beefy battery.

According to a report by WinFuture, the Vivo V17 Pro will sport a Super AMOLED display that measures 6.59-inch diagonally and spans almost the entire front of the device. The screen bears 1,080 x 2,440 pixels resolution, in-display fingerprint scanner, and scratch-resistant glass. The phone will reportedly be powered by Qualcomm’s Snapdragon 675 SoC, which is the same mobile platform that its predecessor Vivo V15 Pro rocks, paired with 8GB of RAM and 128GB onboard storage. Software-wise, the handset runs customised Android 9 Pie out of the box.

The camera, which will be the USP of Vivo V17 Pro, is tipped sport 48-megapixel primary sensor on the quad-camera setup at the back. The shooter is expected to be paired with an 8-megapixel depth-sensing sensor and a couple of 2-megapixel snappers. For selfies, the handset will reportedly come equipped with 32-megapixel wide-angle shooter + 2-megapixel depth sensor setup. The cameras will be backed by Vivo’s AI algorithm and Super Night Mode feature, probably for the low-light environment.

A 4,100mAh battery is likely to fuel the handset that will offer several connectivity options such as NFC, Bluetooth 5.0, Wi-Fi, dual SIM support, 3.5mm headphone jack, and Type-C port. In terms of looks, as we have seen previously, the Vivo V17 Pro will have an all-display fascia with curved edges and centre-aligned pop-up selfie cameras. The back panel of the phone seems to have a glass layer with vertical camera module at the centre. The module has LED flash sandwiched between the quad cameras.