Vivo Y70s with model number V2002A was recently spotted on Geekbench. The listing suggested that it could be the first phone in the world to ship with Samsung’s upcoming Exynos 880 5G chipset. Now, the same has been officially confirmed by the brand through new teaser posters on Weibo. These also reveal key specifications and complete design of the Vivo Y70s, while also hinting the launch could be around the corner. 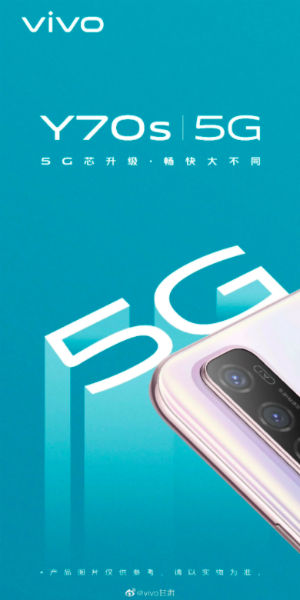 The Vivo Y70s posters image show the phone will come with a punch-hole cutout at the top left corner to house the selfie snapper. There are triple cameras along with an LED flash at the back arranged vertically. The fingerprint sensor seems to be embedded in the power button on the right spine along with the volume rocker. The Vivo Y70s will be available in at least Black, Blue and Pink colour colours with gradient design at the back.

As for the specifications, the Vivo Y70s will arrive with the Exynos 880 5G chipset, which is said to be an under-clocked version of the Exynos 980 SoC. Rumours claim the Exynos 880 SoC will feature two Cortex-A77 cores clocking at 2GHz, six cores Cortex-A55 CPU at 1.79GHz and Mali-G76 GPU. The Vivo Y70s packs 8GB RAM and 128GB storage, but there could be other models at launch and a 4,500mAh battery with 18W fast-charging support, as revealed fro the 3C certification. The triple camera setup at the back will have a 48MP primary sensor but information regarding the other two sensors is scarce at the moment. Geekbench listing revealed the phone will boot Android 10 OS, likely to be skinned with Funtouch OS 10. Unfortunately, not much else is known about the handset but we can expect an official announcement in the next few weeks if not days.