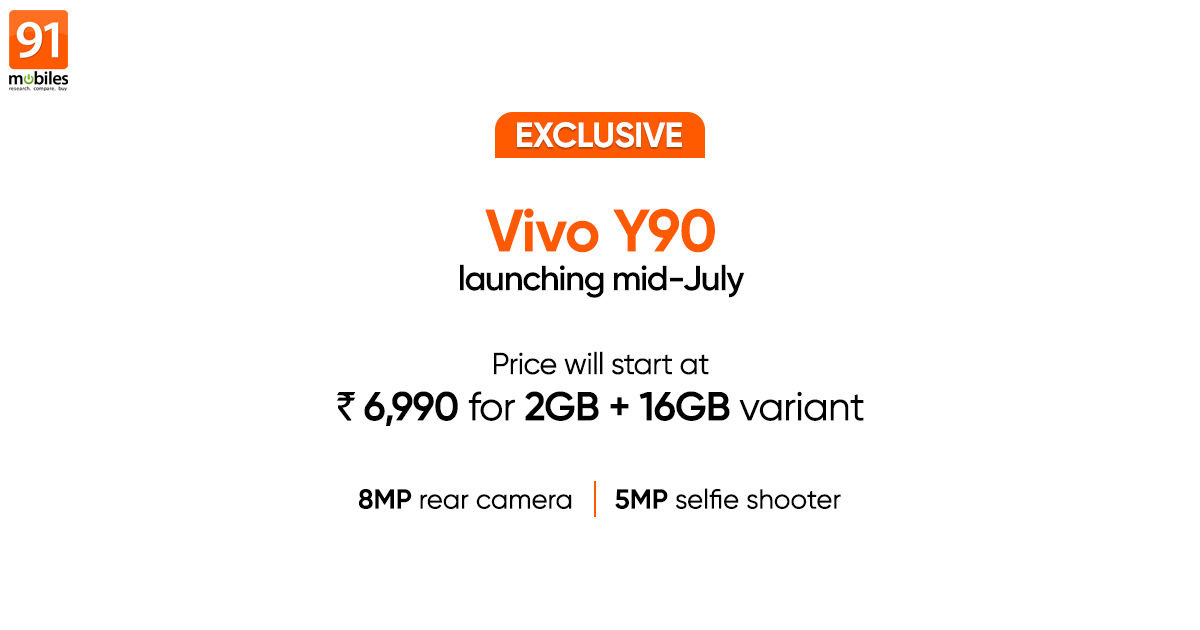 Vivo will soon refresh its Y series in India with a new smartphone called Vivo Y90. 91mobiles has learned from its retail sources that the company will take the wraps off the Vivo Y90 in the country in mid-July. The upcoming smartphone will be a budget offering, targeting buyers looking for a smartphone under Rs 10,000. Our sources said the Vivo Y90 price in India will start at Rs 6,990 for the entry-level 2GB RAM and 16GB storage variant. The handset is also said to feature with an 8-megapixel camera at the back and 5-megapixel shooter on the front for selfies and video calling.

Since this is very first time Vivo Y90 is making headlines, we don’t know much about it. However, what we do know that Vivo may be releasing the Y90 to take on the Xiaomi’s upcoming Redmi 7A smartphone. The latter is scheduled to launch in India on July 4th and is expected to be priced around Rs 6-7,000. Apart from the Redmi 7A, the Vivo Y90 will also be up against Realme C2, which has been priced at Rs 5,999 for the base variant in the country and comes with a dewdrop display, Helio P22 chipset, dual rear cameras, and a 4,000mAh battery.

In related news, the Vivo Z series has debuted in India and the Z1 Pro is its first offering. The handset is the first from the brand to come with a punch-hold display in the country. It’s an online-exclusive device with Snapdragon 712 SoC ticking at its core and a beefy 5,000mAh battery with 18W fast charging running the entire setup. The phone also rocks 32-megapixel front camera and a combination of 8-megapixel + 16-megapixel + 2-megapixel sensors at the back. The cameras are backed by AI and supports HDR, bokeh, and a bunch of other modes.