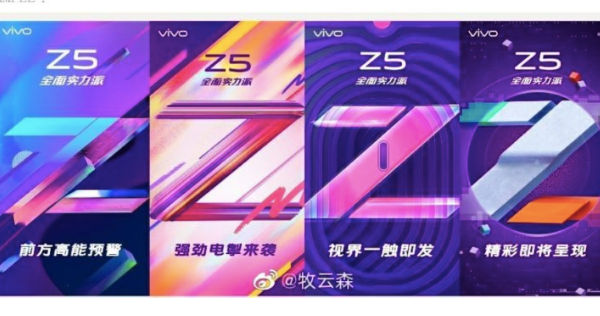 Vivo Z5 could be the upcoming smartphone launched at the Vivo’s event in China on July 31st. The Chinese OEM has reportedly sent out media invites for its next-gen Vivo Z series smartphone in the country. Since this is the first time the Vivo Z5 is making the headline, we’ve little to no information about the handset. However, rumours are that the Vivo phone with model number V1921 that surfaced on the Chinese certification authority Tenaa could launch as the Vivo Z5. The phone will most likely be a sibling of Vivo Z5x smartphone that was launched earlier this year.

As per the TENAA listing, the Vivo Z5 will reportedly feature triple rear cameras with a 48-megapixel primary sensor, paired with an 8-megapixel secondary shooter and a 2-megapixel snapper. The front camera may employ a 32-megapixel selfie shooter for selfies and video calling. The phone is tipped to pack a dewdrop display instead of a punch-hole screen and sport an in-display fingerprint scanner. The handset is said to be driven by a 2.3GHz octa-core processor of an unknown make. The SoC will be paired with up to 8GB of RAM and 256GB onboard storage, which is non-expandable. The Vivo Z5 could measure 159.53 x 75.23 x 8.13mm, weigh 189.6 grams, and houses a beefy 4,500mAh battery – listed as 4,420mAh.

The Vivo Z5, on the other hand, sports a 6.53-inch full-HD+ display, Qualcomm Snapdragon 710 SoC, and triple rear cameras with a 16-megapixel primary sensor. Other highlights include a whopping 5,000mAh battery with 18W fast charging support, up to 8GB of RAM + 256GB storage, a slew of Turbo mode to deliver an immersive gaming experience, and Android 9 Pie-based FunTouchOS to take care of software side of things.