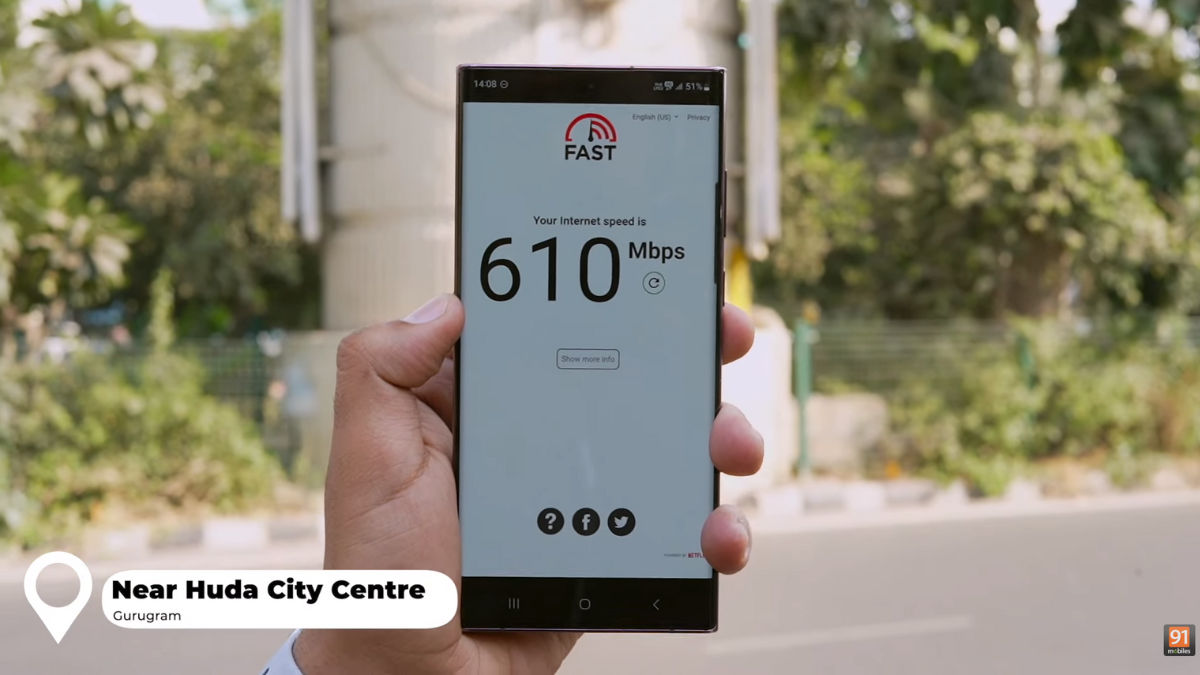 Airtel’s 5G Plus network has undergone our testing procedure. During this test, our video team members visited various places in Delhi NCR and did a quick speed test of Airtel 5G in as many places as possible. To keep the test as fair as possible, both team members used the same postpaid Airtel 5G SIM card inside a Samsung Galaxy S22 Ultra. After arriving at each location, Airtel 5G network passed through two rounds of our test: an internet speed test and downloading a data-heavy game. The speed test application of choice is the “FAST Speed Test” app, and the game of choice is “DEAD TRIGGER 2: Zombie Games” with over 500MB download size.

The test began at Lajpat Nagar, New Delhi, where we witnessed 360Mbps maximum speed on Airtel 5G network. Next, in the second round, the 541MB DEAD TRIGGER 2 gets downloaded within 15 seconds. At DND Flyover, Delhi-Noida, the 5G connection wasn’t stable, and the max speed was 270Mbps before the network automatically switched to 4G.

Next stop: Connaught Place, New Delhi. Here, we noticed up to 420Mbps peak speed on the FAST Speed Test app. The DEAD TRIGGER 2 got downloaded and installed in under 45 seconds. Our team member stopped by Dhaula Kuan, New Delhi, and witnessed an unstable 5G connection with 150Mbps top speed.

Mobile bills may rise as Airtel, Jio mobile plans in India expected to get costly: Report

The following location where we saw the 5G signal was Punjabi Bagh, New Delhi. Although the peak speed came out 500Mbps here, the DEAD TRIGGER 2 took a while to get downloaded on a 5G network, 41 seconds to be precise.

At Mahipalpur, New Delhi, the 5G connection was unstable and only maxed at 130Mbps speed on the FAST Speed Test app. For DEAD TRIGGER 2 to get downloaded and installed, we had to wait for 1 minute and 31 seconds — the most extended download time until now.

With high hopes from Cyber City, Gurugram, our team member was disappointed to see only 230Mbps max speed at the location, and the DEAD TRIGGER 2 got installed after 40 seconds.

PSA: don’t run 5G speed tests on your phone, it will consume your 1GB/2GB data plan in a jiffy