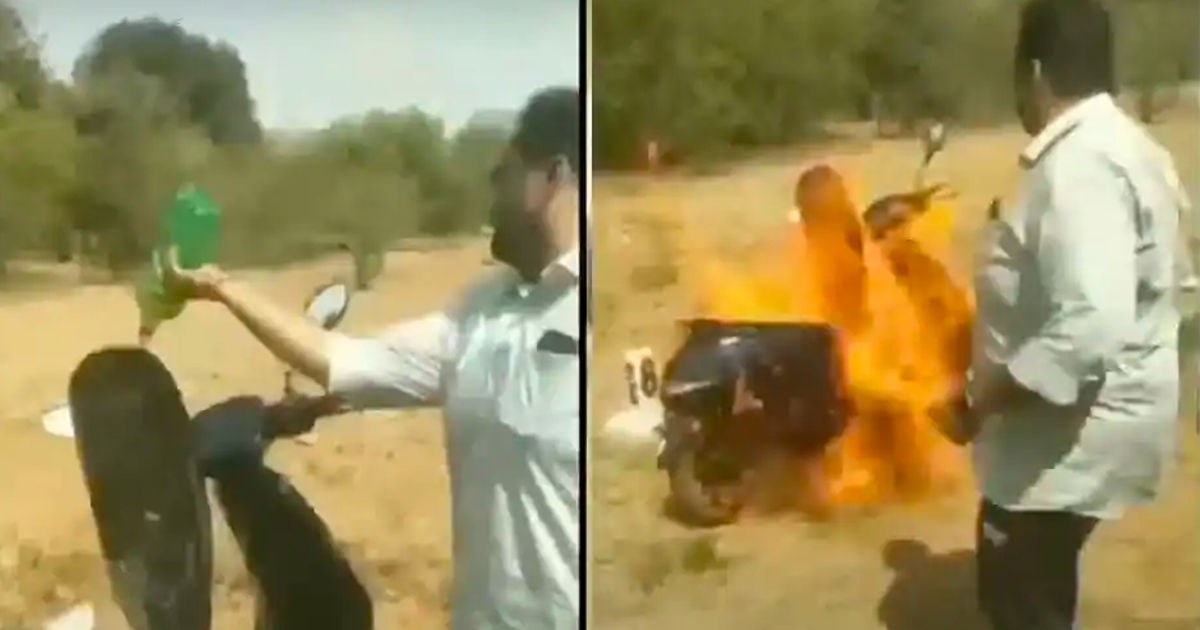 In a recent incident that surfaced online, an owner of an Ola S1 Pro electric scooter set it ablaze after pouring fuel on it. Upon enquiry, the owner from Ambur in Tamil Nadu, Dr Prithviraj Gopinathan stated his dissatisfaction with the e-scooter’s performance and range.

This is not a stand-alone incident wherein an Ola S1 Pro owner has resorted to extreme measures to express their grievances. Recently, a man from Maharastra tied a donkey to his yellow S1 Pro and demonstrated across town after facing sub-par after-sales support from Ola Electric.

In a recent incident, a video where a man is seen setting fire to his Ola S1 Pro electric scooter surfaced on a Tamil news channel, Sun News. The man was identified to be Dr Prithviraj, who is also the owner of the S1 Pro. When asked the reason behind taking such a grave step, Dr Prithviraj complained about the scooter’s performance and range.

Owner Prithviraj mentioned that the erratic behaviour of the electric scooter in terms of performance and range bothered him and he had called upon Ola Electric’s support for redressal of the issues. However, the company had marked the scooter to be in proper working order. Despite being just three months old, the owner claimed his scooter delivered an inconsistent riding range. Dr Prithviraj stated that in this particular instance his scooter had stopped working after riding just 44km.

While he had faced multiple issues with the scooter and received little help from Ola Electric’s support team, the owner reached the brink of his frustration as he travelled to Gudiyatham RTO instead of Ambur, his hometown, because Ola Electric had wrongly filled for registration. As the day proceeded, on his way back to Ambur, the Ola S1 Pro’s battery suddenly dropped from 20 percent to nil and stranded him.

Upon contacting Ola Electric, Dr Prithviraj said he would leave the vehicle and go, but was instructed by customer care to wait with the scooter till a technician would reach the location later in the evening. Unfortunately, the owner after having such a poor experience with his vehicle decided to douse it with fuel and set it on fire.

After the video of Dr Prithviraj lighting up his e-scooter went online, a service engineer from Ola Electric contacted him, requesting to not appear in any interviews with the media and also promised to replace the vehicle with a new one. However, Dr Prithviraj refused stating this was the end of his association with the company.

The Ola S1 Pro has had an underwhelming track record so far and 1,441 units of the vehicle were recalled recently. The company stated that it would be conducting a detailed diagnostic check-up of the scooter’s battery health. An Ola S1 Pro had earlier caught fire in Pune.

This step comes after Transport Minister Nitin Gadkari took a strong stance and warned companies of heavy penalties and full recall if they were found to be negligent in maintaining proper standards of safety after multiple fire incidents were reported across the country. Over a dozen electric scooters have caught fire and many people have lost their lives.

The Ola S1 Pro, which was launched back in August 2021, was originally sourced from the Dutch company Etergo. The Ola S1 Pro in India has faced multiple obstacles and has been plagued with issues as seen here.