91mobiles.com
Home Feature Watch: How Samsung Galaxy Z Fold3 changes from a smartphone to a... 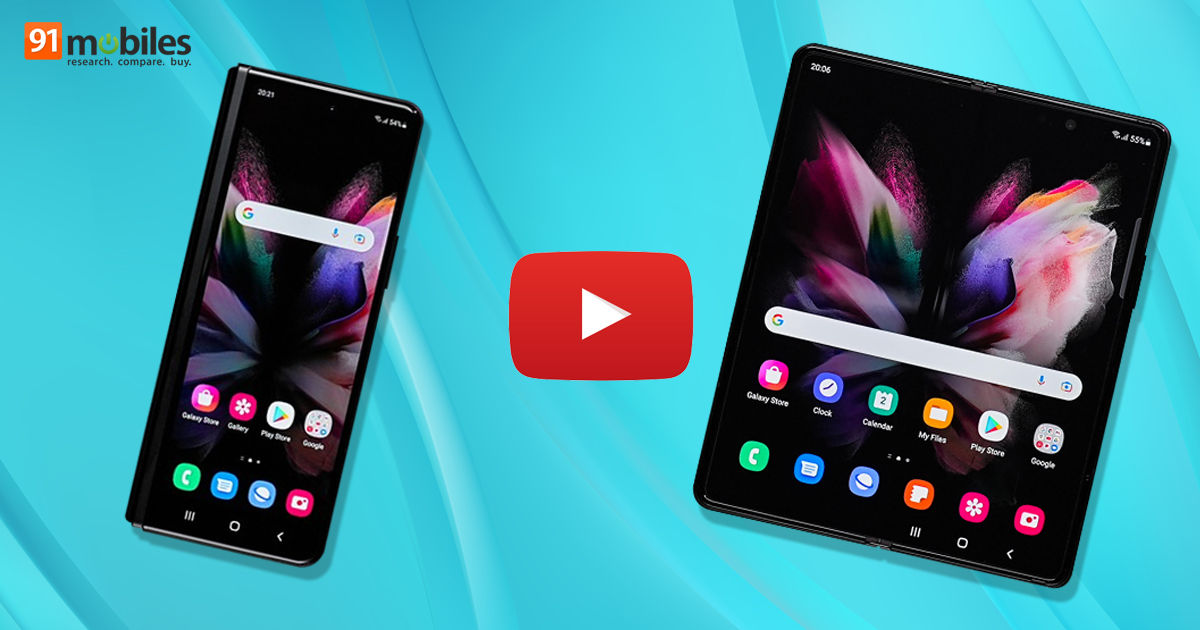 The Samsung Galaxy Z Fold3 is a special device, and a totally different beast as compared to any conventional smartphone available in the market, including flagships. Its crown jewel, of course, is the foldable display that allows buyers to use it as a smartphone as well as a tablet, according to their requirements. The foldable display of the Samsung Galaxy Z Fold3 brings with it a bunch of novelties that help not only with productivity, content consumption, and gaming but even while shooting photos! Let’s take a look at how the smartphone can turn from a smartphone to a tablet within seconds, and how it can help with the user experience.

When closed, it’s almost like a conventional smartphone with a 6.2-inch screen. The form factor is narrow though, and the device is much thicker and heavier than conventional smartphones. Thanks to the special hinge and the foldable screen inside though, you can open it up to reveal the main screen, which measures 7.6-inches. The hinge is quite sturdy, and opening up the phone does require you to use both hands and apply a fair bit of force. The larger main screen is quite sharp and crisp (it’s a 120Hz AMOLED panel after all), and gives you ample real estate to enjoy your movies and use it for productivity-based tasks.

However, the Samsung Galaxy Z Fold3 stops short of becoming the perfect smartphone for video streaming and gaming due to its 22.5:18 aspect ratio. Despite foldable phones being in the market for three years, content that the average user would play on them is still made in 16:9 aspect ratio. That means you see large bars around the video, which becomes very apparent on the large display of the Samsung Galaxy Z Fold3.

Nonetheless, there are several real-world use-cases in which the foldable display of Samsung Galaxy Z Fold3 proves to be unmatched, and others where it improves upon existing Android phones. Check out the video below for the details:

As we mentioned in the above video, one of the advantages of the dual screens is the fact that whatever app you have open on the cover display continues on to the main screen when you open the device, thanks to a feature that Samsung calls App Continuity. How this works is simple. Say you receive a YouTube link on WhatsApp and play the video on the cover display, you can just unfold the device to let the same video play on the large main screen. This extends to a bunch of commonly used apps, such as WhatsApp, Facebook, Microsoft Office apps, and many more.

The reverse can also be achieved by using the option located under display settings. Meaning, you can also let apps on the main screen continue on to the external cover display, but you should know that this is an app-specific setting that would need to be enabled first.

Samsung has added quite a few software features in the Galaxy Z Fold3 to make the best use of the dual screens and the folding form factor. There’s the Capture View in the camera app for instance, which moves the viewfinder to the right side of the main screen and lets you preview captured shots on the left. There’s also an option to enable cover screen preview within the camera app, and this brings up the viewfinder up on the external display, letting you use the primary cameras of the phone to shoot selfies instead of the dedicated selfie sensor. This works with the phone open of course, with the primary cameras and the cover display facing you. 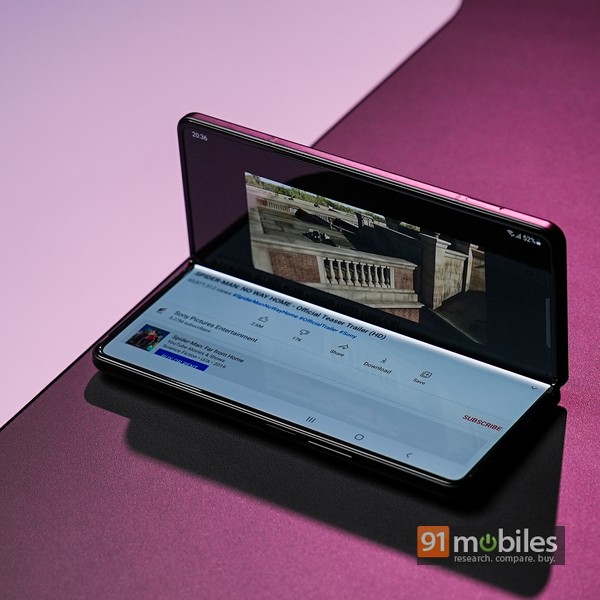 Then, there’s the Flex Mode, a feature that gives you more functionality when the device is propped up half open and facing you, like a laptop. With Flex Mode, compatible apps show the main content on the top half of the main screen that is facing you and display other features at the bottom. The YouTube app, for example, plays your video up top… displaying other video suggestions and details about the video played at the bottom. You can even interact with the bottom half of the screen without affecting video playback. The limitation? Only a handful of third-party apps like YouTube and Google Duo support. No such luck for typing a quick message on WhatsApp using Flex Mode. 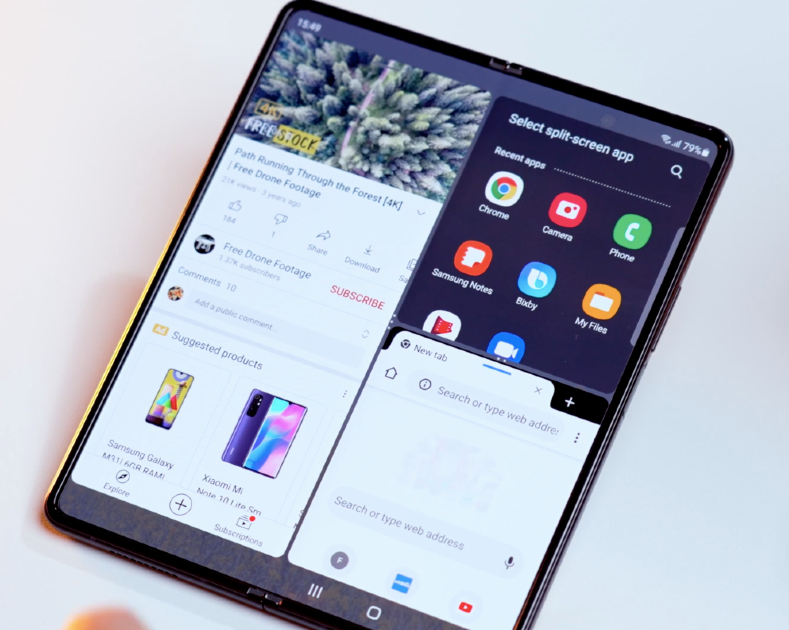 Multitasking is one area that becomes significantly better thanks to the large primary display of the Samsung Galaxy Z Fold3. To make full use of the extra screen real estate, Samsung has added features that allow you to run multiple apps simultaneously. In fact, you can open up to three apps together in split-screen mode, and even add more on top as floating, pop-up windows. The required options for this become visible when you hit the recent apps button, and then tap the icon on top of the thumbnails. These features should not only be useful for power users but also for those who’d like to work with or use more than one app at a time. As an example, it could be quite convenient if you are chatting with some friends on WhatsApp discussing shopping, and browsing Amazon on the side. Or to message colleagues on Slack while checking a document or web page alongside.

Of course, the foldable display is not all golden. You can always feel the crease in the middle of the unfolded display when you are typing, scrolling, or even just looking at the phone at an angle. That’s something, we suspect, will be quite visible for a few more generations.

Samsung Galaxy Z Fold3 is the first smartphone in the world to feature an in-display camera. Thanks to the under-display tech, the punch hole that integrates this snapper is hidden from view almost completely, thereby making your viewing experience more immersive. This helps get rid of the notch (remember the massive notch on the first-generation Galaxy Fold?) and maximise the display real estate to deliver a truly seamless viewing experience, regardless of the app you are using. Even the photos clicked using the under-display camera don’t turn out bad. It’s a 4MP camera sure, but it enables video calling and face unlock when the Z Fold3 is open. Not seeing the small black dot in the middle of the screen, obstructing the full view of a movie, game, or document, is an added convenience that you’d quickly get used to. Of course, it’s not impossible to make out the pixels masking the under-display camera but it’s something you will get over rather quickly. 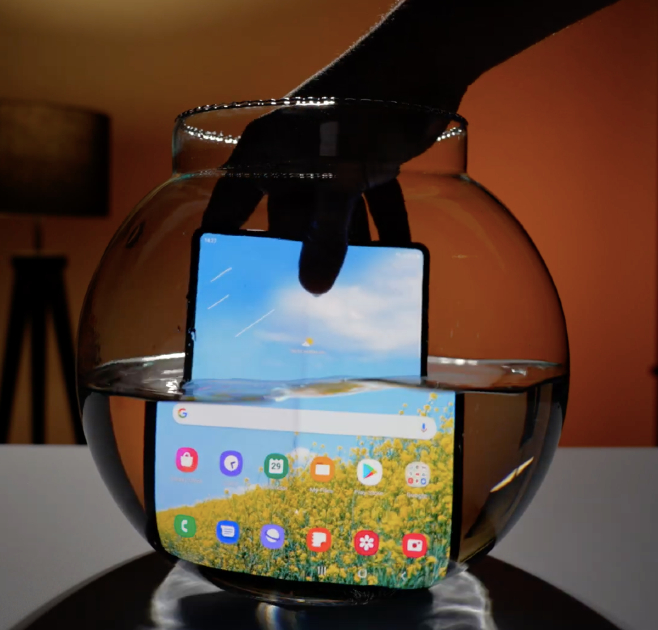 Technically speaking, this isn’t something that can’t be matched by conventional smartphones and other premium flagships. However, the Galaxy Z Fold3 still appears as one of the most durable foldable smartphones. The device is actually the first foldable smartphone that is water-resistant and, in fact, carries IPX8 rating that says it can survive in 1.5m deep freshwater for up to 30 minutes. Samsung says it has used Armor Aluminium for the device’s frame, which helps make it more sturdy too. Plus, Gorilla Glass Victus — which is the strongest protective glass yet from Corning — has been used on the back of the device and on the cover screen. The foldable main screen features a panel layer and protective film and is actually touted to be 80 percent more durable than before.

While Samsung hasn’t been extremely vocal about the hinge construction on the Z Flip3, unlike last year, it does say that the mechanism has been tested for 200,000 folds. Of course, appropriate additions have also been done this time to protect the innards of the hinge from water damage, in keeping with the Z Fold3’s IPX8 rating. By all accounts, the latest foldable from Samsung does seem much sturdier and more confidence-inspiring than before.