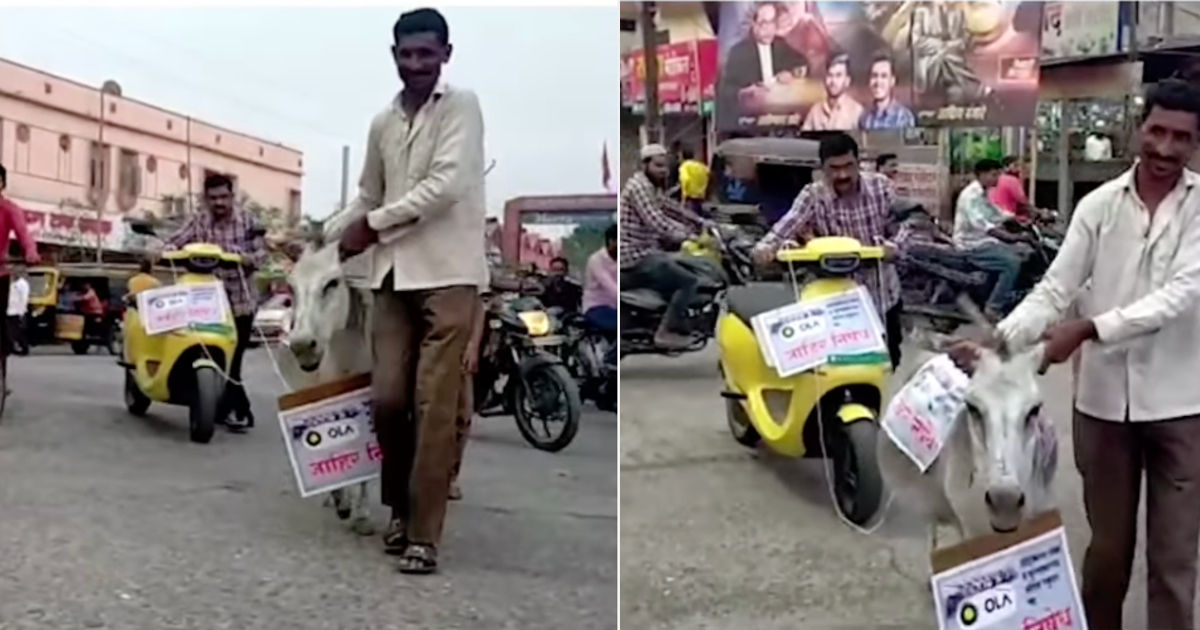 In a recent video that surfaced, a man from Beed district of Maharastra tied a donkey to his Ola S1 Pro electric scooter and paraded it across the town. The man claims he received poor after-sales service when his e-scooter from Ola Electric stopped working. The man attached banners to the donkey and the Ola S1 Pro which read, “Beware of this fraudulent company, Ola” and, “Do not buy two-wheelers of Ola Company.”

Sachin Gitte, the owner of the scooter, is a trader by profession who purchased his yellow Ola S1 Pro last year in September and was given delivery on March 24th, 2022. Gitte complains that the scooter stopped working on April 8th, merely days after it was delivered to him.

Sachin Gitte a resident of the Beed district of Maharashtra booked his yellow Ola S1 Pro back in September 2021 by paying Rs 20,000. In January 2022, he completed Ola Electric the full payment for the vehicle and Ola Electric then delivered the vehicle on March 24th. However, to the owner’s dismay, the vehicle stopped working shortly after on April 8th.

The owner’s video of dragging the S1 Pro across the town after being tied to a donkey has gone viral. When questioned by various media agencies, Sachin informed that he ended up performing such an act after encountering an underwhelming response from the company. Sachin said that Ola Electric did not offer adequate services after the issue was encountered, even after a mechanic was sent by the company.

According to Sachin, he had contemplated setting the scooter on fire but later resorted to a demonstration instead. He tied a donkey and walked the scooter around as a mark of protest and also preached awareness about the product and the company after his expectations were not met. Sachin also plans to take the matter up to the Consumer Forum and said that he is already working on it.

Ola Electric has also recalled 1,441 scooters in the light of the recent incidents of fire-related mishaps taking place across the country in e-scooters. An Ola S1 Pro had earlier caught fire in Pune, amongst many other issues that have plagued the Ola S1 Pro. The Ola S1 Pro electric scooter has had numerous software glitches, problems with reverse mode, a fire issue, and plenty of delays. However, it registered the sharpest rise in electric two-wheeler sales in India in the month of February.