91mobiles.com
Home News WhatsApp Dark Mode for Android and iOS officially released, but it might... 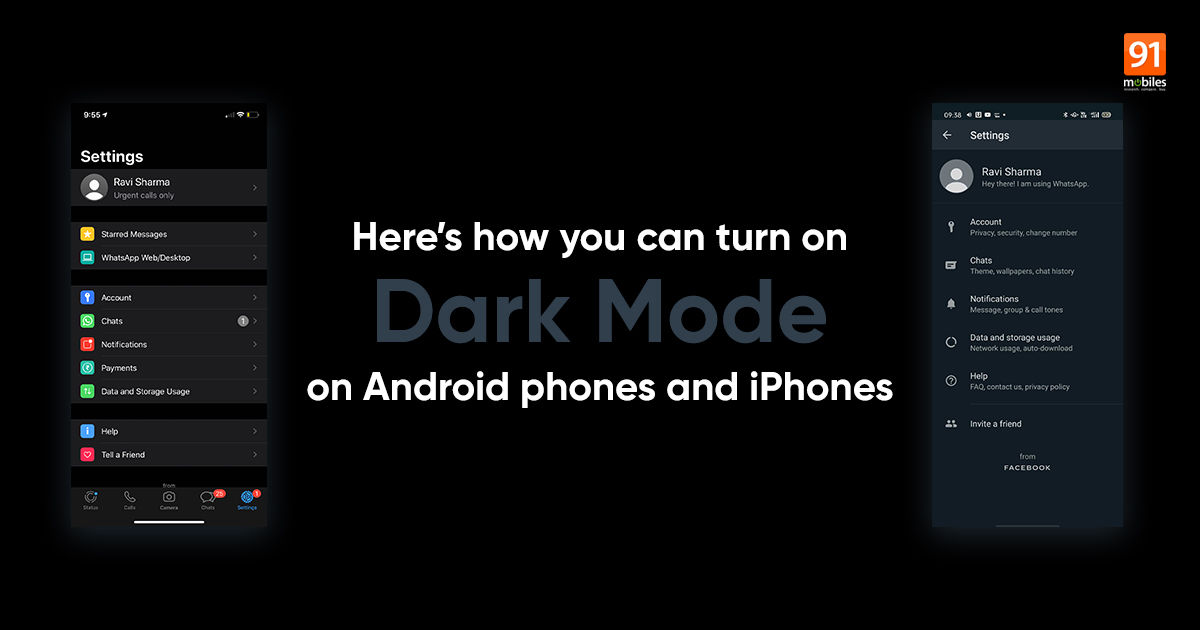 WhatsApp Dark Mode for Android and iOS is finally officially rolling out. The company has been testing out Dark Mode since the past couple of years now and the feature was made available in beta for Android users earlier this year. The WhatsApp Dark Mode stable update has now been released and will be available for Android and iOS over the next few days. The dark theme feature for WhatsApp was highly anticipated especially since other popular apps like Twitter, Messenger and Instagram have had the feature for a while now. Both Android 10 and iOS 13 support full-blown dark mode, and now WhatsApp can join the list as well.

How to enable WhatsApp Dark Mode on Android and iOS

After updating WhatsApp to the latest version, users on iOS 13 and Android 10 should see WhatsApp automatically switch to dark mode if they have enabled system-wide dark mode on their phones already. To switch WhatsApp back from dark mode to light mode, iOS 13 users will have to head to phone settings and enable system-wide light mode. WhatsApp on iOS does not allow users to switch from light to dark and vice versa from within the chat app.

How does WhatsApp Dark Mode look on Android and iOS

WhatsApp Dark Mode on Android may disappoint some users as the feature does not offer a pure black or even a dark grey look. Instead, the feature turns the background dark blue, which should still be easier on the eyes. Unfortunately, those hoping to see a pure black background that would look great on AMOLED displays, especially from a battery efficiency perspective will be disappointed. It is possible WhatsApp will further enhance dark mode for Android users in the future.

WhatsApp dark theme on iOS offers a pure black background with dark grey chat boxes. WhatsApp in a statement to The Verge said that dark mode lowers the brightness of the phone display. “During testing we found that combining pure black and white creates high contrast that can lead to eye fatigue,” explains a WhatsApp spokesperson. “So instead, you’ll notice a special dark gray background and off-white color that lowers the brightness of the screen, cuts down the glare, and improves contrast and readability.”

The latest version of WhatsApp which brings Dark Mode can be downloaded from the Google Play Store for Android users and the App Store for iOS users. Separately, WhatsApp is also reportedly testing dark mode for web and desktop app.