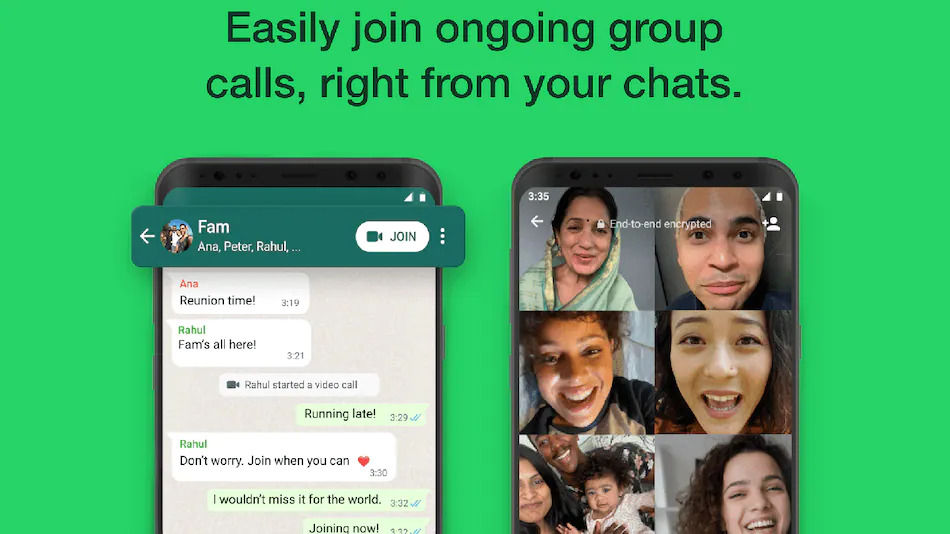 WhatsApp group video calls have been used frequently in the past one and half years because of the ongoing pandemic. The company over the past year has released several updates related to video calls, including support for up to eight people in a group call. Now WhatsApp has rolled out a new update that lets its users join an ongoing group video call directly from the group chat window. All ongoing group video and voice calls will now be easily available in your chats so that one can easily spot and join whenever they feel the need to do so. With the latest update group call notifications will now display the name of the group instead of the names of the participants.

You can watch the example of the new button function from the tweet below:

Need to pop in and out of a group call? Easily join ongoing calls right from your group chats! pic.twitter.com/OtOHKXh5Ev

Whatsapp previously introduced joinable calls, back in July 2021. Though earlier we needed to go straight inside the call menu to see ongoing calls. With this new update, users will be able to join a group video call directly with the “Join” button. To indicate a group’s ongoing video call, we will be able to see a small icon on the group’s display picture in the chat window. Whatsapp also says that the calls will now also receive a lighter distinct ringtone for group calls, which will help the users recognize a WhatsApp group call.

The application has been adding new security features over the past week to attract new users and ensure privacy is maintained for its ongoing users. With the introduction of end-to-end encryption for backups stored on Google Drive and iCloud for Android and iOS users, respectively, WhatsApp has tightened its security for its users. WhatsApp is also reported to update its “Disappearing Messages” feature that will give the users more time and option to choose between 24 hours, seven days, or 90 days after which the messages will disappear upon the user’s request.