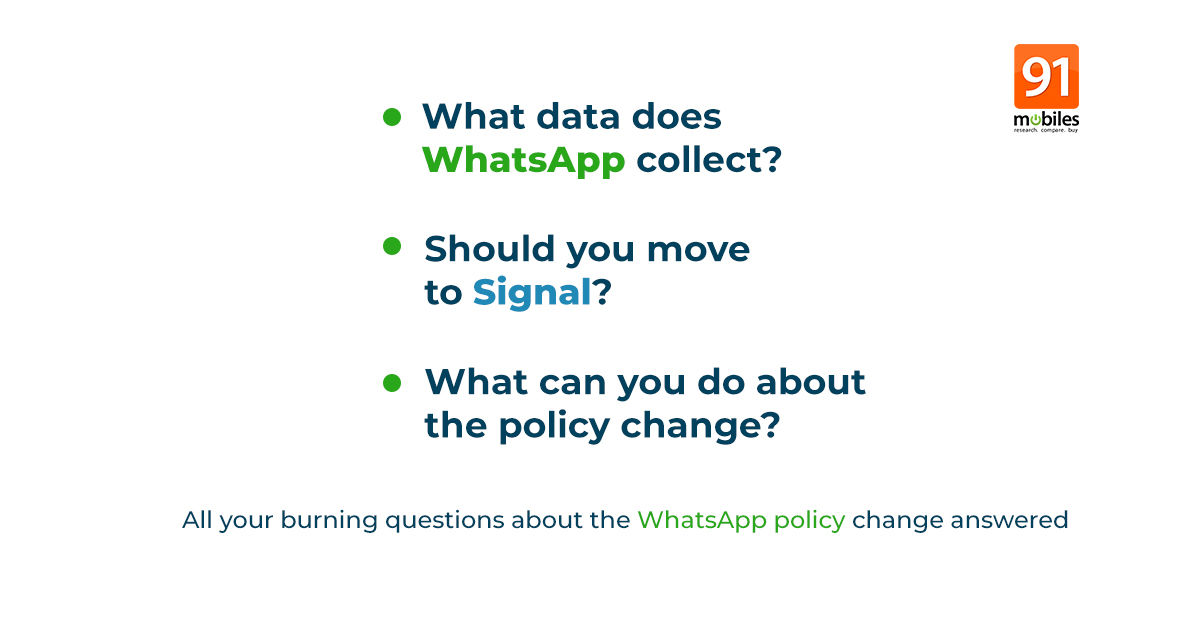 WhatsApp will let businesses collect data from your conversations with them on the platform. Your one-to-one and group chats/ calls still remain as encrypted and secure as ever, the Facebook-owned app has clarified.

What data does WhatsApp collect?

The data that WhatsApp collects is shared with other Facebook-owned properties, such as Instagram, Facebook, Messenger, etc. to show targeted ads and to improve the social media company’s overall services.

As WhatsApp has emphasised over the past few days, the new policy changes affect only your communication with businesses. The messaging platform now has over 50 million Business accounts, leaving a lot of valuable transaction data at those businesses’ disposal. The WhatsApp privacy policy states that the content you share with businesses may be visible for several people in that company as well as with third-party companies that the business works with (including Facebook).

What this means is that the company can not only share all the conversations you have with a third-party service provider that, for example, can parse through the chat logs to see what you buy, transaction value, when you buy certain products the most, etc. This information can then be used to create targeted Facebook ads to drive sales for the business. It’s a cause for concern for anyone, but whether these potential targeted ads (which Facebook is already riddled with) are enough to make you quit WhatsApp altogether is a personal choice.

WhatsApp has clarified that businesses operating on its platform can even use Facebook infrastructure to manage their chats with consumers on the world’s most popular messaging app. The company also says that it will clearly label conversations with businesses that use Facebook’s hosting infrastructure.

The WhatsApp button that you see on e-commerce, news, and other websites you see across the internet is also a data collection point for the company. However, this data has been collected for long and is unaffected by the new WhatsApp privacy policy.

What does all this mean for you?

With this policy change, little will change in the way WhatsApp collects your personal data: it will still not be able to read your chats, listen to your calls, see your Status. And like before, it will continue to share your phone number, device ID, rough location, etc. with Facebook to improve its ads and services. The only change the new WhatsApp privacy policy brings is in terms of the data that businesses can collect from you (via your conversations with them) and how they process that data.

Now, the new WhatsApp privacy policy says that it is up to businesses that operate on the platform whether they want to share data with Facebook or use its infrastructure. However, there’s no way to tell if this policy may change in the future and those businesses will be strong-armed into sharing the customer data with Facebook. Therefore, at the moment, the average WhatsApp user can only wait to see if the company makes any such change, which may happen months or years into the future. In any case, such a change will be made on the sly and not in a manner as public as that of the latest WhatsApp privacy policy change.

What can you do?

While the changes that the new WhatsApp privacy policy brings may not be as alarming as the controversy around the move suggests, it does signal that Facebook is looking for ways to extract more user data from the messaging app. However, there’s little you can do to counter Facebook short of deleting your WhatsApp account.

According to the notification users received last week, you must agree to the new WhatsApp privacy policy changes. If you do not, you will not be able to use the app starting February 8th. You will be able to access your data once again and resume operating your account after you agree to the new policy on the app.

Should you move to Signal?

Signal has gained a lot of traction since the new WhatsApp privacy policy was announced due to its privacy-focussed nature. Unlike WhatsApp and Facebook Messenger’s laundry list of user data, Signal does not collect any user data at all. This has made the latter a darling of anyone looking for a secure, private app. It should be noted that both the apps use the same type of end-to-end encryption for chats and calls.

However, compared to the 400 million+ users of WhatsApp, Signal only has 3.9 million in India. Of these 3.9 million, as many as 2.3 million downloaded the app since the former’s policy change. Considering these numbers, the network effect does tilt the scales in favour of the Facebook-owned app.

Also read: What is Signal, and how to use it

Now, Signal does have several features that you won’t find on WhatsApp, most of them aimed at ensuring the privacy of user data. These include the option to disable screenshots within the app, Incognito Keyboard, the ability to blur the faces of people in photos you send in chats, hiding your IP address while making calls (Call Relay), etc. On the other hand, chat stickers, Status updates, and Last Seen are some of the things that the average WhatsApp user is habituated to by now, and something Signal has no replacement for at the moment.

The government can block this move by WhatsApp in the interest of user data security and privacy. The Confederation of All India Traders (CAIT) has already urged Information and Technology Minister Ravi Shankar Prasad to stop Facebook from implementing this policy.

The industry body has said, “all kinds of personal data, payment transactions, contacts, location and other vital information of a person who is using WhatsApp will be acquired by it and can be used for any purpose by WhatsApp” and asked the government to either block the policy change or ban the app as well as its parent company altogether.

However, the government has been not done enough to address concerns of data privacy against Facebook and WhatsApp in the past, so it is unlikely that it will block this new privacy policy in its current form.

In Hong Kong, the privacy watchdog has asked Facebook to delay the February 8th deadline, while Turkey has suspended the move altogether and opened an investigation into the messaging app and its parent company regarding data collection practices.

WhatsApp alternative Signal app explained: What is it and how to use

WhatsApp vs Signal: privacy, features, how to transfer groups, and more