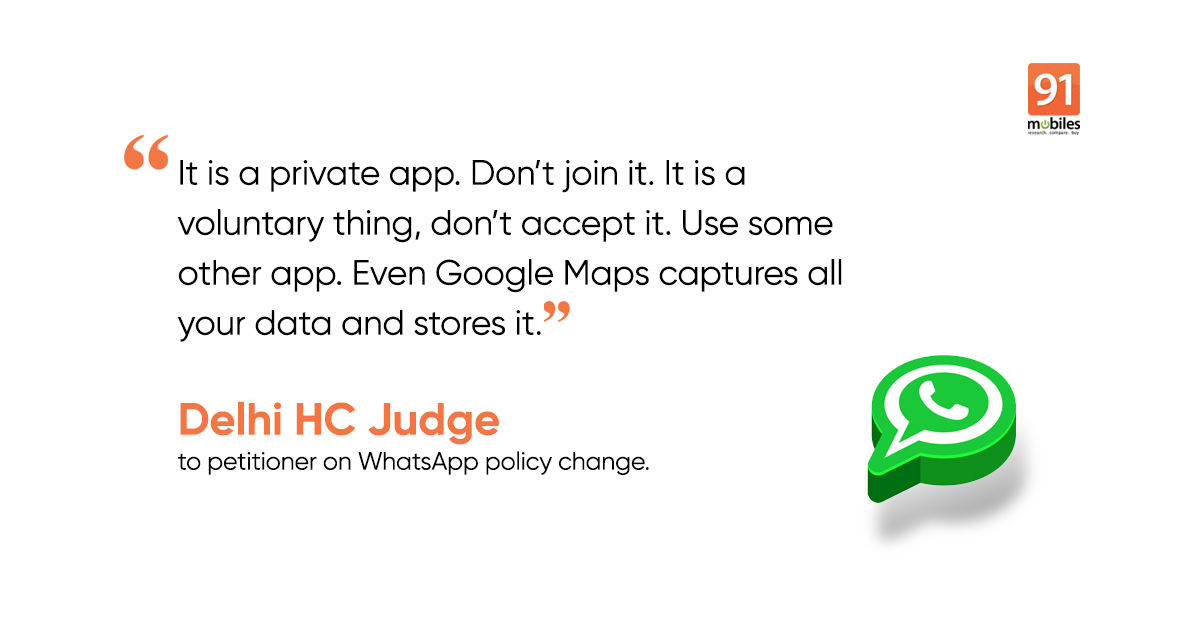 A Delhi High Court judge, Justice Sanjeev Sachdeva, has told a petitioner that WhatsApp is a “private app,” using it is “voluntary,” and to “not join it” if they don’t agree with it. Justice Sachdeva, hearing the petition, said: “It is a private app. Don’t join it. It is a voluntary thing, don’t accept it. Use some other app. Even Google Maps captures all your data and stores it.” According to PTI, the court also added that users consent to share a metric ton of data with other apps, which is true to a certain degree. The bench has asked the petitioner to submit what data stands to leak with this WhatsApp privacy policy change on January 25th.

Over the weekend, WhatsApp announced that its controversial privacy policy change regarding data sharing will not come into effect in India until May 15th. The messaging platform has been scrambling to clear the air around the convoluted policies, and even issued an in-depth explanation of the same with a huge media push.

WhatsApp maintains that the proposed changes will only affect chats with businesses, with personal chats remaining unaffected. WhatsApp’s troubles are far from over, and things are unlikely to change in the coming weeks even as the courts and the central government take no issue with the change.

In the meanwhile, WhatsApp’s competitors such as Signal and Telegram have been witnessing a massive surge of users on their respective platforms. Telegram gained over 25 million users in just three days. It is good to see Telegram gain more mainstream acceptance, as the app has always remained one step ahead of WhatsApp when it comes to features, ease of use, and privacy.

WhatsApp working on self-destructing photos for Android and iOS